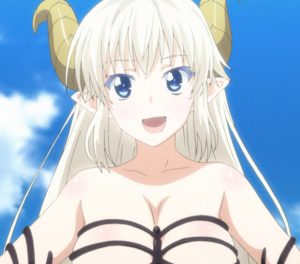 Yu-Sibu, also known as Yu-Shibu, or to give it its absurdly long full title I Couldn’t Become a Hero, So I Reluctantly Decided to Get a Job, is an anime series set in a fantasy world, with some entertaining similarities to our own. That full title describes the premise of the series pretty well. Raul Chaser has gone through all his training at hero school, and just when he gets to fight the monsters the Demon Lord dies and there’s nobody to fight any more, so he gets himself a job in a shop selling appliances.

It looks much like a store from our own world, selling washing machines, microwaves, televisions, all that sort of thing, but the store is called Magic Shop Reon. That’s because this is a world of magic, not science, so all those appliances might look familiar but they are powered by magic. It’s a really funny blend of magic and the mundane, and people have to power the appliances in their homes by sticking their hands in a socket connected to the house to feed their own magic power into the system. The animators have a lot of fun getting very close to the names of some familiar technology brands, but if you’ve seen a few anime series you’ll probably be used to that kind of thing. How many anime series have a WcDonalds, or something like that?

The manager of the shop is a young woman named Seara August, and the assistant manager is a man named Visor Crossroad. For most of the series he’s the only other male character, and I’m not sure why they bothered to include him, because he has very little to do and doesn’t seem to be blessed with a personality. The other main character is rookie employee Phino Bloodstone, who is secretly the daughter of the deceased Demon Lord. It’s quite funny to see her accidentally scaring customers away by saying inappropriate things, such as commenting on the blood red colour of an appliance, while she tries to fit in and do a good job. She’s a really cute character, and you can’t help but root for her to do well.

The other employees are Nova Luminous, who has little to do other than to be perved on by an old male customer on a daily basis (I kid you not, he arrives in a vehicle shaped like the Enterprise, complete with NCC-1701 written on it), and Lore Periferal who is… well, peripheral to the action, but she is a lot of fun. She’s their delivery driver and mechanic, and is one of those characters who is unfazed by anything. In one episode a faulty device shoots out magic tentacles to grab all the staff, and she calmly hangs there in mid air giving some helpful advice, never panicking for a second, a very entertaining contrast to the other girls. Next door is a convenience store, run by Elza Crucial who is in love with Raul, and her feisty assistant Ramdimia Do Aximemor, who also has a secret past and gets very angry about anyone shortening her name, which of course everyone does all the time.

The final main character is Airi Altinate, Raul’s old rival from hero school, who ends up working for a rival appliance store. This is one of several challenges Raul and his colleagues face during the series, with a huge new store opening and taking away all their customers.

If you are offended by nudity then you’ll want to avoid this series, because it is extremely heavy on fanservice. Most of it is there for the sake of humour, so I thought it was reasonably justified by the nature of the show, and it’s mainly confined to Phino, whose naked chest the animators delight in showing in as close up detail as possible. As is so often the case with a fanservice-heavy series, once they get on with the business of telling a good story the fanservice quota tends to decrease and you realise that they actually had a good series that didn’t need propping up with panties shots. The last few episodes of the season tackle an exciting storyline with Phino captured and forced to take her place as the new Demon King, which requires Raul and Airi to make use of their hero skills once more, with the help of all their new friends. It’s a great conclusion to the series. There is also an OVA episode, which is quite funny. Raul’s little sister comes to visit, and he has been giving her the impression that he’s still a big hero, so he tries to maintain that impression with the help of his friends. As you would expect with an OVA episode for an ecchi series, it’s all an excuse to get the characters naked as often as possible, but by that stage of the game you’ll either be enjoying all that stuff, not bothered by it… or will have given up watching. That would be a shame, because this is such a fun series. It’s far from being the highest quality anime I’ve ever seen, but it doesn’t take itself too seriously like a lot of these fantasy things.

Demons, boobs, heroes and an appliances shop. Only in anime.  RP

Co-writer on junkyard.blog. Author of windowsintohistory.wordpress.com. Editor of frontiersmenhistorian.info
View all posts by Roger Pocock →
This entry was posted in Anime, Entertainment, Reviews, Television and tagged Fanservice, Fantasy, Yu-Shibu, Yu-Sibu. Bookmark the permalink.