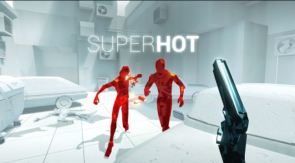 What’s black and white and red all over?  A mauled penguin?  A nun having fallen out a window?  A newspaper?  A Grendel graphic novel?  Damn these puzzles are tricky.  OH, what about Superhot Team’s Superhot?  Yes, that is the name of the developer, publisher and game!  And in 2016, when it came out for the PC, I thought it sounded gimmicky.  The premise is that nothing moves unless you do.  In other words, every level opens in perfect stillness.  If you start to move, so do your enemies.  You want to stop, just stop moving.  When they shoot you, a bullet can be seen moving through the air as slowly as you want, if you just stop moving.  And this gives you ample time to dodge it.  You’d think.

I picked up Superhot for $20, during another great Steam sale, but it still retails for $25.  I only got 6 hours out of the game and, if I’m honest, I enjoyed it, but it was, in fact, gimmicky.  Not particularly memorable as a game I’d go back to.  So when the VR version got released a year later, I could not believe that my son wanted to play it.  I ignored it while he played and said it was great.  Then I picked up an Oculus Quest 2 last year and there was a demo for the game.  I raised my eyes to the heavens and shook my head.  Why was I doing this?

Now I ask, what took me so long?  Superhot was made to be played in VR.  I watched a video of myself playing it (because my friend is sadistic and recorded me) and it looks like I was practicing Tai Chi.  Maybe it’s secretly teaching me something, but the actual experience of playing it was exciting in a way I never imagined Tai Chi!

The game doesn’t have awesome graphics.  It’s probably more akin to Tron than any modern era game.  In fact the opening of the game makes you feel like you’re in a game from the 80’s.  It’s hard to describe the aesthetics.  It’s like the world was frozen in white.  There are shades and you can very clearly make out what you are seeing but there’s no color in the world.  (Maybe those are shades of blue in the distance, but I see the game in three colors.)  Weapons and throwable items appear in black.  The enemies and the trajectories of bullets appear in red.  Every level defeated ends with a computerized voice saying Super. Hot. Super.  Hot.  Super. Hot.  The music is … actually, I can’t recall there being music, though I’m certain it was there, but I was too caught up in the action of the game.  And I have to say that the movement and the action of this strange world is mesmerizing.

A mission opens with 3 glass-jawed enemies attacking you.   Who am I kidding, they are glass bodied, because a single punch shatters them.  Sounds simple right?  Not so!  Your character is equally glass bodied.  One hit kills.  So those three dudes are attacking you.  One from the left, one from the right, and one straight on with a gun.  As if living in a Quentin Tarantino movie, you slow motion grab for a nearby ashtray and throw it at the shooter.  As it slowly drifts through the air, you turn and throw a punch at the nearby attacker who shatters like glass.  As the ashtray makes contact with the other enemies, his gun flies through the air and you grab it, spin and let one shot off into the last attacker.  You feel like Neo living in the Matrix, Captain Ninja proving your lethal prowess. Super. Hot. Super.  Hot.  Super. Hot.  The next level has a handful of Ninja Stars on a shelf next to you and this time, there are multiple shooters.  You throw the star, but oh now, you miss, and have to dodge bullets as you wait for an attacker to get closer.  Shatter… grab… spin… shoot… and hope. A lucky punch causes a gun to fall into your hands but after two bad shots, there’s not a bullet to be fired, so you throw the gun, hit the enemy, grab his gun and take out the last red glass villain.

The game has won numerous awards and it’s well deserved.  It’s incredible what can be achieved in simple storytelling and animations.  I actually can’t tell you that there’s a story, but it’s like going to climb a mountain; who cares about the story, you’re there to have fun.  (I don’t know if that’s why people go to climb mountains actually.  I think “because it was there” works too, but then, maybe that’s why you play games as well.  What do I know?)

In fairness, this game is relying on a gimmick but it’s one that works immensely well in VR.  Like the non-VR version, it also retails for $25, but I would say this is a worthwhile investment.  I’ve played it and had friends over to try it as well.  I’ve replayed missions just because I wanted to get better with them.  (Incidentally, I recommend playing with a wireless headset like the Oculus.  Wired seems to become too cumbersome with some of your awesome ninja skills.)  This may not appeal to everyone, but it sure is fun to play.  Check out the video to determine if it’s also fun to watch!  ML

Like Loading...
This entry was posted in Entertainment, Games, Reviews, Science Fiction and tagged Superhot. Bookmark the permalink.