Posted on July 8, 2021 by DrAcrossthePond 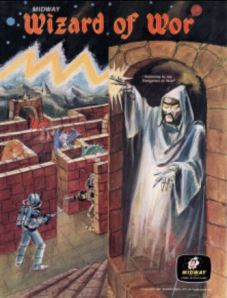 When I went back for a bit of retro gaming, I was delighted with Jumpman and his son, Jumpman Jr.  It reminded me of some of the great games that came before the modern era of computer gaming, when the Atari reigned supreme amongst the 8-bit gaming systems.  Well, it did for me anyway!  But the biggest win for me with revisiting those two games was finding out that Jumpman had an actual end sequence.  This made me wax nostalgic from WOW.  Now, you might be thinking: “Oh, I play WOW all the time!”  I doubt it.  See, back in my time, WOW was not World of Warcraft.  It was Midway’s Wizard of Wor.

First I need to take you back in time. The year is 1980 and I lived in Staten Island, a small borough of New York.  At the time, I would have been between 8 and 9 years old and my then-best friend and I would walk to Silvestro’s deli.  This deli has been a mainstay in my old neighborhood and it still stands today… but not where it was when I was a kid.  “Back in my day”, it stood next to Al’s Barber shop: a barber I was pretty convinced might have been a failed chiropractor for the amount of sudden twists he’d give your head as he cut your hair.  Anyway, me and my friend would do something that today’s youth would probably by horrified by: we’d walk to the store.  There were far fewer cars on the road back then and just two blocks from my house was a dead end street; it lead to a little bridge over a very small brook that cars could not cross, so we would walk over said bridge and to Silvestro’s Deli.  We had to cross Watchogue Rd which was busier than the others, but with a friend, we always had each others back.  In Silvestro’s was a single arcade game: Wizard of Wor.

Wizard of Wor was a special game for us at the time because we didn’t have to take turns playing; we could play cooperatively.  In point of fact, I can’t think of any other co-op games from that era.  Most games either took turns (like Galaga, alternating between players) or against one another (like Joust, trying to nail the other off his flying ostrich).  Wizard of Wor put the two players in a maze where they hunted and killed monsters.  There were a few monsters that could become invisible which meant your scanner was your lifeline. Think Aliens when you watch the video (below). Unlike the xenomorph, these creatures were a bit less frightening. I remembered all of the creatures, but had no idea that they had names until I looked the game up.

The bulk of the creatures were slow moving, blue Burwor’s.  There were two similar creatures; a yellow, 2-legged Garwor and a red, four legged Thorwor; these would periodically fade from sight and would take some skill to kill.  The Worluk was an insect-like creature that moved far faster and would get us nervous whenever he’d appear because we were not that coordinated.  And then there was the Wizard of Wor himself, a spectral cloaked entity that would drift through the levels.  Killing him always made us feel like we’d scored a great victory.

What made me dive into this game was that, reviewing Jumpman made me want to know how this game ended.  My friend and I would drop copious amounts of quarters into this game and we discovered that some boards had names.  I think it was level 4 that was called Arena (yep, just verified it) and level 13 was called The Pit.  Now, I don’t know if we knew it back then but the Pit was technically the final mission.  So to give some idea of how it worked, think of Pac-man for most of the boards: all top down mazes that were relatively easy to play if the two players worked together.  The Arena was a bit more exposed, with a large open area in the center of the board.  The Pit was just a free-form open area; there was nowhere to hide.  We made it to The Pit; sadly we also died there and did not have enough quarters to play more.  Worse, by the time we went back, the game was replaced by another game and he and I never got to see what happened when completing that dungeon.

When I decided to take a brief visit to the era of retro games, I never expected to see that Jumpman had an actual ending so I looked into Wizard of Wor in the hopes of finding something equally rewarding.  Instead, I found a few really disappointing things.  The first was that the game continues after The Pit, just going through more dungeons with every 6th level repeating the Pit.  Lame!  Worse, there is no end.  I always thought we’d missed out on some cool finale; something to make us a feel accomplished.  It could be a small video like Jumpman going off to Earth or even a giant WELL DONE like Jumpman Jr.  Alas it was not to be!   Midway released a fun game but not one with an ending.  And that makes me feel sort of ok with the way we stopped playing it.  We’d made it to the Pit; we were heroes.  Since there was no way out, at least we can say we came, we saw… and we stayed.  Definitely a letdown but at least we didn’t miss something amazing…  Oh well, maybe the next game will have a happier ending.

Enjoy a look at 1980 as presented by Retro Gameplay.   ML

Like Loading...
This entry was posted in Entertainment, Games, Reviews, Science Fiction, Technology and tagged Midway, Wizard of Wor. Bookmark the permalink.