As readers of the Junkyard know, I loved Subnautica.  UnknownWorlds released a survival game that kept me completely immersed without needing to create an action-packed battle game.  Instead, it’s a game that keeps your toes curling as you dive deep into the depths of an alien ocean.  When it was announced that there was a sequel coming, I was delighted but I resolved not to purchase it until it went gold (not Early Access but the finished product).  I grabbed Below Zero as soon as it was available. 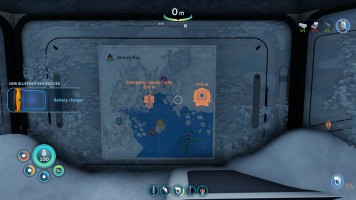 In some ways, Below Zero surpasses the original because the area to explore is reduced.  There are ice walls to the north and west which limits the amount of searchable space you can explore.  There’s a chasm of some depth to one other direction and, being the James Cameron of the computer gaming world that I am, I plunged into the darkness.  I was greeted by a massive horror that nearly killed me and I only survived by using an electric defense on my craft.  I realized the electronic voice that warned me away from that chasm was actually a barrier of its own: don’t go this way, it will kill you.  So that meant most of the game took place in roughly a 1000 meter area.  There were some extremely deep fissures to explore which adds that dimension and some of the finds are really exciting.  Once again, that itch gets a good scratchin’. 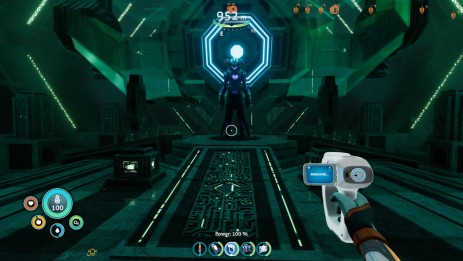 Unlike the original, you are not alone on the planet.  There is a scientist living there with you and you befriend her.  You also can build a robot penguin that allows you to see your own character as it trundles along, moving into tight spaces in search of unique minerals.  And you get to make the acquaintance of AL-AN, a telepathic machine that gets in your head.  AL-AN offers the bulk of the plot.  In an attempt to get him out of your head, you’re helping him find what he needs to build a body.  The question that lingered over me all game long was: was AL-AN being honest with me?  The original game didn’t have a villain to speak of, so I was not sure if this game would follow in the flipper-steps of its parent or go down a different path.  You’ll have to play to find out but I won’t deny I was nervous especially when he got his body!

Speaking of differences, one surprise for me was the absence of the seamoth.  I loved the little craft and zipping around in that was great fun.  In this, we can build a sea truck, which isn’t quiet the next best thing.  The first module is just the front cabin, but as you find more parts, you can build an emergency teleporter (which was psychotically useful as I was running out of air and could not figure out how to get back to my ship), an aquarium cabin (to automatically pick up fish to cook and eat) and a sleeping cabin to… well, sleep.  A friend of mine told me he found the schematics to build a Prawn bay so you could take the Prawn with you.  Oh, yeah, the Prawn is the huge, robotic body suit you get to walk around in, just like in the previous game.  It has a grappling hook which allows some fast movement around the map.  That was a change from the sea truck which gets slower with each module.  I got used to the idea of disengaging the rest of the truck when I wanted to move around quickly.

Another difference is how much takes place on land.  I explored many an “ice station zebra” on this world and it’s at one of these locations that you locate a map to get an idea of what you can explore.  Mind you, unlike many games like this, the map is not something that can be brought up for interactive viewing.  It’s a picture of the area so you’ve got to work some of that out on your own.  I’d argue that this isn’t the most convenient thing, but it sure is more realistic. 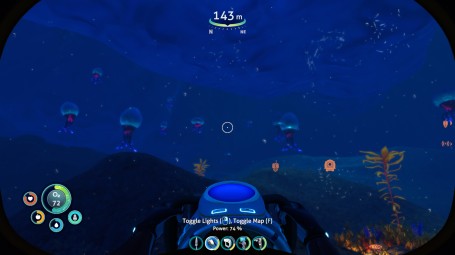 On top of that, this adds a new natural problem: staying warm.  In the original game, food, water and oxygen were all you had to worry about.  Sure, I say “all” but that was a juggling act from the word go.  Now, there’s frigid areas that require either a warmer wetsuit, or a hot spring.  Thankfully the water is not too cold in most places, but get out of the water and watch how fast the temperature starts heading… Below Zero!  Depressingly, I died once while running back to my ship and I could not make it to a hot spring in time.  Still, I was so enamored of the sea life that it makes up for a lot!

I still wish the save feature could be improved upon but as this is a smaller game, it doesn’t matter as much.  Ironically, the last day I played Subnautica was July of 2020.  I finished Below Zero nearly a year later on June 28th 2021 having sunk 30 hours into it.  I know I will replay it because there are a ton of things I didn’t find.  For instance, there is a snowmobile of sorts that I never encountered.  I have a few parts to it, but never the completed unit.  I did find enough to build 2 bases, with a fully functioning bathroom though.  Useless, in the grand scheme, but man did I love building out my base and hanging posters on the walls.

Perhaps building the base is the only real negative of the game.  I had a wonderfully constructed base, but there are areas you can’t build and that made it where my base had to be in two parts because I didn’t know that as I built it.  On the plus side, you can disassemble everything in your base and recover every component.  Many games make it where you can only recover a fraction of the components; it’s nice that Subnautica plays fair with that!

Subnautica: Below Zero is a beautiful game that has thrilled me just as much as the parent game did.  I’ve tried to find other games like it but nothing quite gets it.  I said it before and I will say it again: if you’re in need of a truly immersive experience, you cannot go wrong with Subnautica: Below Zero!  Dive in… again!  ML

Like Loading...
This entry was posted in Entertainment, Games, Random Chatter, Science Fiction, Technology and tagged Below Zero, Subnautica. Bookmark the permalink.