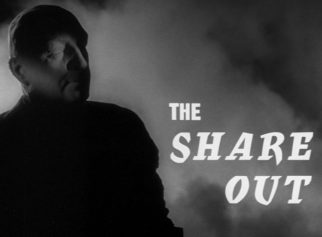 This entry in the Edgar Wallace Mysteries series of British B movies shows us the most civilised looking criminal gang I have ever seen. They look like a group of smart business people having a meeting about their company finances, while they are actually digging up dirt on powerful people and using it to blackmail them into selling their houses at a fraction of their real value. It’s a clever scam, but it has been noticed by Det. Supt. Meredith, played again by Bernard Lee in his fourth of five appearances in The Edgar Wallace Mysteries, the third as Meredith.

Bernard Lee is great here as Meredith, trying to find a chink in the armour of this very clever gang of crooks, and finding a way to manipulate criminals to be on the side of the law, in order to potentially catch even nastier criminals… or at least that’s what he appears to be doing. This one has a great twist at the end. To a certain extent he drops in lucky, because his cause is helped very much by his plant, going-straight-ish Mike, who falls in love with the only woman in the gang, Diana. This apparently makes them much more co-operative with Meredith, because now they are fighting to protect something other than their own skins. That means we have to put up with one of those irritating accelerated romances these films sometimes show us. Diana and Mike have supposedly fallen in love within minutes, and are getting married by the end of the film, although the ending throws enough doubt on how they really felt about each other to just about make that all hang together.

Mike is played by William Russell. I’ve been saying from the start of this film series what a treat they are for those who like to spot familiar British actors in different roles, and that goes double for Doctor Who fans. Just a couple of weeks after seeing Anneke Wills in Candidate for Murder (although she didn’t have a huge amount to do), we have another Doctor Who companion actor, but this time in a key role. Russell was probably best known for playing Sir Lancelot in his pre-Who days, and does seem better suited to the good guy roles. He’s entertaining here, and you’ll never get a less than competent performance from Russell, but he comes across as a little too heroic to be playing a crook, even a reformed(ish) one, and he never quite manages the hard edge to the character that the role called for here.

This is quite a slow-paced film, although there is enough intrigue to keep us guessing a bit more than the average Edgar Wallace Mysteries film. I’m not sure the story holds together all that well, and it does rely on a group of people who have co-operated so successfully that they have raised half a million pounds suddenly collapsing into a paranoid mess of back-stabbers. The idea of the two keys for the safe also seems like an odd idea, obviously favouring Calderwood, who has three potential targets in order to hold both keys, and amusingly he seemed to be simply keeping £500,000 of diamonds in a desk drawer before coming up with the safe plan. Meredith’s actions also seem rather odd, using Mike to apparently do his dirty work and kill off whoever is left from the gang and haven’t already killed each other, and then shrugging off what has happened.

“I’d much sooner have got them into court, but you can’t have everything, can you.”

Just when you think things are heading towards an unsatisfactory conclusion, with an odd happy-ever-after for a woman who has just been blackmailing people out of their homes, we get a fabulous twist. It might not be the biggest surprise I’ve ever seen in a murder mystery, but it certainly elevates the film to a much more satisfying, well-rounded story than it was shaping up to be.

You have to feel a little bit sorry for Mike, though, considering he was dragged back into a life of crime by a detective. But the Doctor Who fans know he was destined for a happy ending, after escaping from prison and changing his name to Ian Chesterton. Perhaps a better life awaited him, hidden away in a junkyard…   RP

Read next in the Junkyard… The Edgar Wallace Mysteries: Number Six

Co-writer on junkyard.blog. Author of windowsintohistory.wordpress.com. Editor of frontiersmenhistorian.info
View all posts by Roger Pocock →
This entry was posted in Entertainment, Movies, Reviews and tagged Bernard Lee, Crime, The Edgar Wallace Mysteries, The Share Out, William Russell. Bookmark the permalink.

4 Responses to The Edgar Wallace Mysteries: The Share Out (Review)