The Spider and the Tulip (Review) 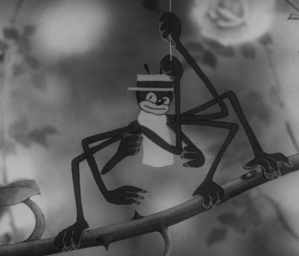 The recent Blu-ray and DVD release of 1945 Japanese wartime propaganda film Momotaro: Sacred Sailors comes with a bonus on the same disk, a 1943 short animation from Kenzo Masaoka. The Spider and the Tulip is absolutely enchanting, but to enjoy it you do have to be prepared to put up with an historical example of a blackface caricature. The spider facially resembles a black and white minstrel, and speaks in a deep male voice that brings to mind Al Jolson. That aside, the film is remarkably lacking in any kind of xenophobia or wartime themes, considering it was made in 1943, and was consequently not well-received by contemporary critics as it was thought to be an oddity, failing to work towards the war effort like just about any other film being made at the time. Despite the blackface villain, it stands as a testament to how humans can focus on beauty while surrounded by horror.

The hero of the story is a ladybird, who is portrayed as a cute little girl in a ladybird outfit, like some kind of a fairy creature. Almost everything is anthropomorphised in this animation, even the flowers that have faces in them. The villain of the piece is a spider, who is an amazing work of animation. He is somewhere between arachnid and human acrobat, with a couple of his legs seeming to function like hands as they work his web. He moves around like a highly-skilled circus performer. The spider has made a hammock out of web, and is trying to tempt the ladybird to come and try it out, so he’s a devious chap. The ladybird is wise to his tricks and isn’t having any of it, so the spider has to simply try to attack his prey, who is rescued by a tulip, which hides the ladybird inside its petals. The spider wraps the tulip in web, and all seems lost. He has a meal ready and waiting for him in the morning.

I suppose this is where contemporary cinema-goers might have expected some kind of wartime allegory, with military heroes coming to rescue the ladybird, but instead nature takes a hand. A huge storm breaks the spider’s web and despite his best efforts it carries him off on the wind, eventually to crash to earth and presumably drown in a puddle. To see this as any kind of propaganda you would really need to construct your own metaphor, with the storm representing the power of the Japanese military or something, but there is nothing to indicate that the writer is trying to make much of a point here, other than the usual sort of tale of good triumphing over evil. The ladybird inside the tulip is freed by a friendly fly, who then gets tangled and has to be rescued by the ladybird. Perhaps ironically for wartime, this film shows the benefits of co-operation between very different creatures, so if it’s possible to discern any message about war it’s actually a subversive one. The tulip, ladybird and fly work together to save the day, with the help of a lucky break from the weather. I don’t know how this got past the censors at the time. Actually, it almost didn’t, but in the end there was no reason to refuse the film’s release as it was not seen as detrimental to the war effort, only irrelevant to it, which perhaps represents a lack of imagination on the part of the censors, who failed to spot that the most obvious allegorical interpretation of this, if you want to read it as a representation of war, is that the path to peace involves co-operation with other races and a lot of blind luck.

But enough of the wartime stuff, because this stands as an example of beautiful and extraordinarily skilful animation for 1943, considering everything at the time was being made under the most challenging conditions and limitations, with shortages of staff and materials. The motion of the spider is a work of genius, and this actually manages to pack a lot of excitement and emotion into just 15 minutes of animation. It’s a shame the facial representation of the spider is unpalatable to a modern audience, because otherwise I think this would be a much better known piece of work. It almost deserves greater recognition than the longer film it accompanies on the disk. In the horror of war, a moment of innocent beauty was created.   RP

Author of windowsintohistory.wordpress.com Co-writer on junkyard.blog Editor of frontiersmenhistorian.info
View all posts by Roger Pocock →
This entry was posted in Anime, Entertainment, Movies, Reviews and tagged Momotaro: Sacred Sailors, The Spider and the Tulip. Bookmark the permalink.

1 Response to The Spider and the Tulip (Review)