Returning to Big Finish after a bit of a gap has been a mixed bag and I’m desperately torn on my feelings about Scherzo.  Having left our universe at the end of Zagreus, Charley and the Doctor are in a new universe.  I can’t help but be reminded of Star Trek: Voyager; this is a great premise that is laden with risk.  If we don’t see something genuinely different, it’s just more of the same with a silly half-baked idea of actually being different.  The fact that Scherzo delivers speaks, no pun intended, volumes; we are actually in for something unusual.

I won’t go through a play-by-play but each of the four chapters opens with a monologue about a king who ultimately drove music out of his kingdom.  Loosely, this ties in with what is going on in each episode: the Doctor and Charley are in a white void where they actually fuse together, merging as one entity for a while.  When they start making sound, specifically in the form of song, some entity tries to make contact.  In my mind, this gets high points for creativity; it’s not totally unique, but it’s a cool idea and definitely different from what we’ve seen in the series up until now.  I get that this universe is different (time has no meaning so when the Doctor casually mentions a being from the next story, we are seeing first hand how strange a place this is) but it’s very weird to consider the two characters as one entity.  I don’t know that it worked for me.

The problem was one of vision.  I’m a very visual listener.  I have a far better memory for things I see, so my brain compensates by creating the world as the story unfolds.  I thought this was a wild experience in my minds eye, but couldn’t help think that it was beyond belief that it went on like this for 4 whole episodes.  There is no another character in the story. There is a voice that says “help me” but it’s never identified as another character and seems to be the universe itself trying to communicate.  This impresses me a lot but unlike Peter Capaldi’s tour de force in Heaven Sent, this made me struggle; McGann and Fisher don’t quite pull of what Capaldi did.  A lot of that might have been Charley herself, who I find somewhat annoying, always sounding like she’s trying to be posh but the Doctor fares no better.  He’s extremely abrasive in this story, being mean to Charley and basically acting very un-Doctor-y.  He’s so grossly out of character that he makes Charley cry even after she confesses that she loves him.  Part one also features what I would consider a very early-developmental thing from Big Finish: the “tell me what you see” bit.  The audio medium is, unsurprisingly, not a visual one so we have to listen to the characters and other sounds to piece together what the place looks like.  When the Doctor says something like, “tell me what your senses experience”, that’s the writer finding a shortcut to fill in the exposition part of a story.  If one thinks for a book, you get all of that in unspoken paragraph format, so this feels weak and unsatisfying.  It worked well enough with The Chimes of Midnight, but why do we need that in more than one story?   On top of that, there’s a rather gross bit with eating an amoeba-like creature they encounter who later develops to look like Charley.  It was so gruesome, that the sound of the Doctor and Charley eating is the end sequence of episode 2!

As an audio story, it is interesting and delivers on the promise of bringing us somewhere strange and different.  It also does this in a very short timeframe. I was planning on listening to all 4 parts over 2 days of travel to and from work, but when part one ended half way to my job (15 minutes), I concluded that my timing would be off for this story.  Another thing that really felt weird about this production didn’t hit me until part 4: there was no music in any of the episodes.  I don’t mean the opening theme, but the incidental music is absent throughout the Doctor and Charley’s adventure.  The effect is far stranger than I would have expected had someone even told me to expect it.

On the other hand, I found the Doctor’s dialogue about sound being the conveyor of meaning fascinating, although probably for the wrong reasons.  In the story, Charley and the Doctor cannot communicate with whatever else is with them because it doesn’t know the language and can only communicate via sound.  The Doctor explains that the meaning is in the sounds, not the words.  And I was suddenly thinking of conversations I’ve had with my wife about songs.  I’m going out on a limb here by saying 90% of the songs I hear on the radio, I get bits and pieces of what is being said, and never the full thing.  My wife, on the other hands, reads all lyrics and dislikes instrumental music because there are no words.  For me, I felt like the creature in this Divergent universe might actually be understood by me, who seems to miss the words anyway.  This made me wonder if this story was intended to be an allegory about mondegreens but perhaps that was a bridge too far… 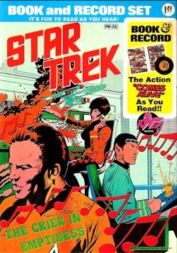 I will share that when I was a kid, I had (and still have) a Star Trek vinyl called The Crier in Emptiness.  It’s a comic book with a record to listen to which features the crew of Kirk’s Enterprise encountering a sound creature.  It was a fascinating story, which I really need to listen to again but it meant that I had an experience like Scherzo when I was very young and I think it might have been done better there, simply because it took the idea and kept the visual medium intact.  But I would really have to listen to that again to make a genuine assessment!

Overall, Big Finish kept its promise and brought us somewhere alien.  Like music, it’s a bit of a hit-or-miss thing.  This story will either connect or it won’t but that doesn’t mean it shouldn’t be heard.  Big Finish is often experimental and I think this was exactly that: an experiment.  Like music, it will be up to the individual to determine if it’s a symphony or a lot of sound and fury, signifying nothing.   ML