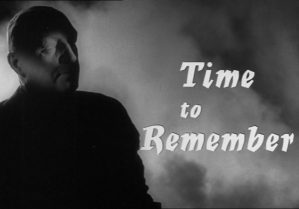 This is Harry H. Corbett’s second appearance in The Edgar Wallace Mysteries series of British B movies, and it’s a very different role to Inspector Bruce in Marriage of Convenience. Corbett gave a straightforward performance as Bruce, verging on bland at times, although the climax to the film was an acting masterclass. This time, Corbett is playing Jack Burgess, a complete failure of an estate agent, who keeps hoping he will hit the big time by closing a sale on a valuable property, but can never quite manage that. His girlfriend, who is also in his employment and isn’t getting paid, is losing patience with him. From the first moment we see him in this film, Corbett gives a big performance. He was definitely born to be a comedy actor, and he does bring the character of Jack to life in a way that he failed to do with Bruce, but this is probably the first time I’ve seen a performance in any of these films that I would describe as theatrical, with the actor maybe having a little bit too much fun in the role. That’s saying something in a film that also has crooks who pronounce their words like “he’s gorn past”, and “get back to the windah”. Kudos to Genine Graham, who plays a woman with a gorblimey accent trying to pretend she’s posh enough to buy a big house, and then has the accent slip from time to time. It’s a very clever performance.

We are almost in the same territory again as Candidate for Murder, with almost the entire film taking place outside the realm of law and order, with the viewer left guessing about which of the criminals will outwit the others. Even Jack falls into that category, as he is quick to go down the path of criminal activity. His backstory of failure in his line of work and the threat of losing the woman he loves makes a lot of sense of that aspect of the film. You can’t help but end up feeling a bit sorry for some of the players in this game. Both Jumbo and Sammy seem like they have redeeming features to their personalities, and both meet tragic ends. As for Jack, events sort of spiral out of control for him, and the most serious crime he commits, as revealed in the brilliant twist ending, was initially an act of self-defence.

These are cheaply made films, although that generally doesn’t show and certainly doesn’t here. What tends to give away the low budget is the lack of location filming, which is generally used sparingly, but here what little we have is incredibly effective. The momentary shots of Paris are clearly stock footage, but the London scenes are amazing, with some great stunt work up on the roof of that very impressive town house. They clearly got lucky with the weather (although the actors probably didn’t feel lucky – they must have been frozen up on that roof in those conditions), with the bleak snowstorm adding an extra air of danger to proceedings, especially when somebody is slipping around on a sloped roof with a sheer drop at the bottom. When Jack was trying to find the hidden jewels my heart was in my mouth.

As is often the case, I’m not sure everything hangs together terribly well, perhaps a symptom of a complex story being compressed into a one-hour format. The aspect of this that troubled me the most was the shenanigans concerning the blocked up fireplace, which has all kinds of logical problems. Firstly, the police fail to join the dots about where the jewellery was hidden, despite there only really being one option if Jumbo hid it when he was on the roof. Then we have Jack discovering the location just because he hears rats in the chimney, which is quite a mental leap, and then somehow managing to brick the fireplace back up in a very short space of time. The agent for the property, who holds the keys, fails to notice that a nicely plastered fireplace has been replaced with some shabby brickwork, even though he arrives when Jack is fiddling around with the bricks and his pocket knife.

So it all takes a bit of believing, but the twists and turns in the story all come so thick and fast that it somehow just about works. Not only did the director get lucky with the snowy location footage, he also made the most of the studio-bound scenes, many of which take place in darkened rooms, particularly Jack’s office when he is stressing about trying to sell the jewellery and buy the property late in the evening, which really emphasises the tension and sense of foreboding. The irony is that he could have just collected the reward, which was £20,000, only £5000 less than the money he got for the jewellery. Sometimes honesty really is the best policy. RP

Read next in the Junkyard… The Edgar Wallace Mysteries: Solo for Sparrow

Author of windowsintohistory.wordpress.com Co-writer on junkyard.blog Editor of frontiersmenhistorian.info
View all posts by Roger Pocock →
This entry was posted in Entertainment, Movies, Reviews and tagged Crime, Harry H. Corbett, The Edgar Wallace Mysteries, Time to Remember. Bookmark the permalink.

1 Response to The Edgar Wallace Mysteries: Time to Remember (Review)