Nosferatu: A Symphony of Horror

Welcome to Halloween in the Junkyard! We are going to start with one of the great classics of silent cinema from 1922, the unauthorised adaptation of Dracula, which only survives to this day thanks to the survival of a handful of prints that were supposed to be destroyed. The fact that Nosferatu came so close to being lost to history doesn’t bear thinking about, because it is a visual masterpiece.

With dialogue impossible, apart from caption cards, this is all about building the atmosphere via the all-important visuals. With a couple of notable exceptions, the acting is nothing to write home about, but the locations are made the stars by the director, with shot after shot framed in some way like a work of art. Time and time again, scenes are shot through archways or windows. Sometimes it feels like the viewer is trapped or hiding away, and it also allows for light and shade to play its part. One of my favourites was a shot from below the deck of the ship, looking up at Orlok. The locations themselves are inspired choices, and the direction provides a breathtaking clash of beauty and fear. And it goes without saying that shadows are used to great effect. Orlok’s arrival to take possession of his victim is rightfully one of the most iconic scenes ever committed to film. 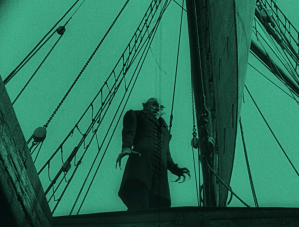 I’m not sure the director gets everything right though. Initially, there is a strong focus on the night being dangerous and daytime being completely safe, such as Hutter’s fear of the vampire legend he reads in a book at night, and then his laughter at the same book the next day. But later we get Orlok wandering around in what appears to be broad daylight (however it’s tinted), carrying his coffin with him, which loses a lot of the fear factor, and then virtually makes a nonsense of the very weak ending to the film, with the Count just standing in front of the sunny window and making no attempt to escape. It also doesn’t help that Knock is captured off-screen, after a lot of effort showing how he’s more than capable of outwitting the angry mob. There are a few occasions where the film becomes accidentally funny, such as Orlok emerging from below deck with a smile on his face.

By and large, the narrative stays quite close to the original novel, despite the removal of a couple of major characters. The addition of the plague to the story works very well, keeping the town in the grip of fear and, together with Knock’s antics, drawing the townsfolk’s attention away from Orlok. Watching this is even more haunting than it would have been a few years ago, with the town going into what we would now term a lockdown, staying in their homes and forbidden from taking their infected relatives to hospital.  Only now have we returned to being viewers who understand the significance of this moment in the same way as the original audiences, for whom the horrors of the Spanish Flu was fresh in their minds.

Acting in silent films had to be what we would consider overacting nowadays, for obvious reasons, and that’s what happens with most of the actors in this film. It’s nothing to complain about, and in the case of Knock, for example, Alexander Granach does a great job of portraying the descent into madness, and his performance is arguably more disturbing than Max Schreck’s, particularly when he’s eating flies, or later laughing on a rooftop as a mob throws stones at him. But Schreck does something that was probably a different way of acting than anyone had ever seen before at the time, because he makes his performance so tightly contained. It’s like watching the birth of modern acting, where less is often more. Orlok is at his most frightening when he is motionless (e.g. framed in the window of the derelict building he occupies), or just allowing the movement of his eyes to tell the story. When he menaces Hutter in his castle, the actor achieves a cadaverous rigidity to the way he walks and an unblinking stare. A 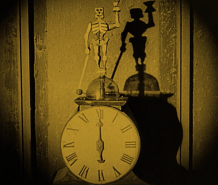 lmost a century later, it still stands as one of the greatest horror performances of all time, if not the greatest of all.

Next Sunday, for Halloween itself, we will be taking a look at a film that gave us a fictionalised account of the making of Nosferatu, Shadow of the Vampire. Set your clocks, and be there, if you dare…   RP

The view from across the stormy seas:

Halloween is meant to be scary and I don’t know if there is a movie that embodies that better than Nosferatu!  If you’re wondering, as I’m sure many of today’s audiences do, how a movie in black and white, with no sound barring some rather dreadful music can be any good, you’ve got to make the time to view this one.  Do what I did: put it on at midnight with the lights off then come and tell me what you think!  And remember, you have to be able to imagine.  I have a feeling that visitors to our website are very good at imagining.  We’ve dedicated our entire pastime to bringing you to weird and wonderful worlds of imagination so I’d be surprised if our readers can’t envision a time before special effects; to mentally go back in time and experience Nosferatu when the movie theater was truly an experience; an outing that was not an every-day occurrence.   Join me for a brief trip back to…

No, not 1922, but rather the late 1970’s, maybe early 80’s in Staten Island at the St. George theater.  If my sister was alive at that point (which would put us in 1980), she was too young to go to participate in this event.  The Staten Island advance announced that they were showing a classic, the “original vampire movie”.  My dad thought it might make a nice outing for us, knowing that I loved monsters even at that young age.  There were two showings some 4 hours apart which made us think that the movie might be substantially longer than it actually was.  Off we went.  I don’t think either of us knew what to expect!  To this day, that first image of Count Orlok appearing on the screen with that hat and those folded hands still sends a chill down my spine.  In fact, every scene with Max Schreck (the title character) is magnificent.  It’s almost impossible to take our eyes off him.  And he was supposedly a very odd man to begin with, but we’ll come to that next week.

The story follows Hutter, our Jonathan Harker character from the book Dracula.  He is sent to meet Count Orlok (Dracula).  I’m sure most of us know the story.  He enters Transylvania and it’s a scary place; the land of phantoms.  He reads about vampires and acts like an ass as he throws the book while laughing, totally ignoring the cultural significance in a foreign land.  In many ways I found Hutter disturbing to watch.  His cavalier disregard for the warnings of a land made me less sympathetic to him than I probably should have been.  His overly exaggerated smile is a bit creepy to watch even in the early scenes of love between him and his wife, Ellen).  But even with his terrible actions, the moment we see Orlok, I was concerned for him.  There’s a brilliant moment where Orlok is reading some documents and he randomly stares over the edge of the paper.  It’s a genuinely chilling image. 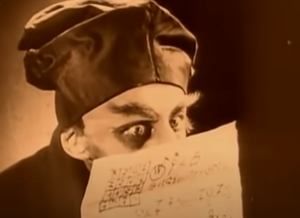 Though there are some astoundingly good images to capture from this movie, I wanted to catch this one, because I think this might be even more alarming than some.  The dark rings around his eyes, those elongated eyebrows and the empty stare are enough to chill the blood.  Even I, a man who loves the strange and the “other”, would be alarmed to look up and see this chap staring at me!  But there are so many moments that chill the blood: there the moment when Hutter begins to piece it together and finds Orlok asleep in his coffin, the image is no less terrifying.  But perhaps the single most recognized moment is on the Demeter when Orlok rises from his coffin.  That bald head, incredibly long fingers and those two front teeth… I know I was mesmerized and it was an experience that my dad and I talked about all the way home.  Sadly, my dad is no longer with us because, among so many other reasons I’d like to talk to him again, I’d love to know if he still remembered this experience.  I never forgot it.

But let’s now flash forward to 2021, when I watched this at midnight one October evening and, to my surprise, it holds even greater significance.

A large portion of the movie has to do with a plague that comes to the land and I’ll tell you, reading the announcement was nothing short of stunning.  “The mayor announces that ill or plague-stricken people should not be seen on the streets and cannot be taken to the hospital.  They must remain in their homes.”  By God!  That sounds shockingly familiar!  But wait, there’s more…  “Fear was hidden in all corners of the town.  Who was still healthy?  Who was already sick?”  I actually asked my cat if he was reading the same thing I’d just read.  He replied, but I don’t know his language, but I’m guessing he said yes.   The vampire was not the only chilling thing on the screen, let me tell you.

I don’t know what the director had in mind with some secret message in this; I’ve read plenty that there were anti-Semitic undertones to the movie.  I didn’t pick up on that but I also wasn’t watching for that.  When I watch a movie, it’s with the intent of seeing the movie and rarely trying to dig to determine what a director had in mind.  If I plan to dig into it, I want to dig into the story.  Yet, after all these years, I was stunned to find I was so caught up with an idea that could never have been foreseen.  Then again, the name Nosferatu translates probably most closely to “unclean one” which then works fairly well in a more modern allegory. Here I sat, watching a scary movie about a vampire and seeing an even more haunting tale echoing life in our post-Covid world.

Halloween is meant to be eerie, scary, haunting, creepy… all things I typically love but when it gets too close to home, it takes on an even more chilling aspect.  Nosferatu may be an old movie, it may be silent, may have very limited effects, but it is no less a powerhouse that predates so much of the horror genre and now has an added significance.  This is a must-see piece of cinema history.  There are moments that drag, I admit, but remember: cast your mind back to when this was first shown, where the world was not flooded by horror movies and vampires on all of our screens and imagine what chills went down the spines of the audience.  Then join in those chills and hope you don’t wake up with a shadow leaning over your bed.  It might just be the Count… Happy Halloween!   ML

Read next in the Junkyard… Shadow of the Vampire

Co-writer on junkyard.blog. Author of windowsintohistory.wordpress.com. Editor of frontiersmenhistorian.info
View all posts by Roger Pocock →
This entry was posted in Entertainment, Movies, Reviews and tagged Dracula, Films, Halloween, Horror, Nosferatu. Bookmark the permalink.

1 Response to Nosferatu: A Symphony of Horror