Posted on January 11, 2022 by DrAcrossthePond 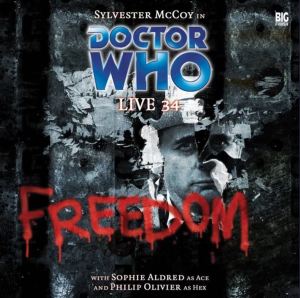 This just in with the new year…  We interrupt your regularly scheduled blog post to bring you the latest from Junkyard 17.  Big Finish, creators of the popular range of Doctor Who audios, have done it again.  They’ve told a cautionary tale that we can all relate to.  Good evening, I’m your host and I’ll be bringing you all the news that’s fit to print.  But first, the weather…

Today, Colony 34 will be experimental, with a hint of The Natural History of Fear.  Expect clear episodes, without any evident cliffhangers and no theme to open and close the chapters. And now, sports…  Naxy has been canceled today due to bad publicity.  Also, this story will see three contestants acting in ways we’ve never seen them act before.  McCoy, Aldred and Oliver (Hex) will be kept apart for the bulk of the story to tell three separate parts of the tale that will come together in unexpected ways.  Will they manage to save the day?

And now, the story you’ve all been waiting for.  The real events on Colony 34 are explored through a series of news broadcasts. It’s an unexpectedly strong story that had this listener on the edge of his seat while driving and it might be summed up by one comment.  We go now, live, to our man on the street, code named, The Silver Fox.

Good evening Mike.  It seems a maniac is in control of the government of Colony 34.  This episode packs a punch especially after our own recent troubles with [redacted].  The man, Premier Jaeger, has suggested that elections should be put on hold.  Later, he announces he won the election but he never stood for office.  If this story did not sound like what was going on in [redacted], I don’t know what would.  It was a little too close to home for comfort but made for an excellent adventure.

Thank you Silver Fox.  There was a specific line that really hammered home a point.  I go now to our foreign correspondent, Mr. Englishman.

Evening Mike.  Yes, the line that spoke volumes was about the “monsters hiding behind the sofa”.  The Doctor says that they are not usually the ones that hide behind the sofa.  It’s a clever line that turns the trope on its head and one that fans, especially those of the modern era, can get behind.  I think it also echoes your own thoughts about the news, if I’m not mistaken!

Thanks Mr. Englishman.  And yes it is.  My own kids, [redacted] and [redacted] had been known to tell my wife that the news was far scarier than anything I was showing them.  I was showing them fiction; she was watching the reality and what goes on there is scary indeed.  Scarier still when you consider what we saw in The Long Game, where The Editor said that the news can be used as a tool to change reality.  I wonder if that’s what has happened on Earth!

However you cut it, the news is scary and turning an adventure into a news broadcast was inspired.  This makes a nice audio parallel to The Long Game, doing things that would be far harder to do on a television budget.  McCoy, Aldred and Oliver have never been better.  Typically I stay away from the news, but this is one broadcast I wouldn’t run away from.  Let’s just hope these ideas stay in the realm of fiction, eh?  ML

Like Loading...
This entry was posted in Audio, Doctor Who, Entertainment, Reviews, Science Fiction, Seventh Doctor and tagged Live 34. Bookmark the permalink.