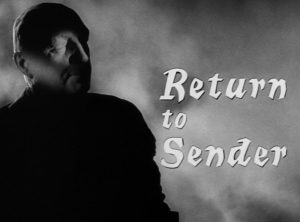 Initially this seems like a relatively simple entry into the Edgar Wallace Mysteries series of B movies. Dino Steffano (Nigel Davenport) has been working a clever scam where he filters money from his business partners through a fake company in Zurich, while paying it to himself. The police have finally caught up with him and he is due to stand trial. The prosecuting barrister, Robert Lindley (Geoffrey Keen), has a reputation for being the best in the business, and Dino’s first idea is to bribe him.

Instead, Dino decides to try to discredit Lindley, and employs the services of Mike Cochrane, who is an expert in that kind of thing. He decides the only option that will work is to make it look like Lindley is having an affair, and much of the film is spent with Cochrane sneaking around and faking the necessary evidence. William Russell is back for his second appearance in this film series, and he plays Cochrane with an emotionless coldness, despite clearly holding a grudge against Lindley. I’m not quite sure his approach to the role works, considering Cochrane is supposed to be blinded by the need for revenge, which is the one chink in his armour.

In fact, I’m not sure the story works at all, anyway. The film gradually shifts from being a simple case of a crook trying to find a way to escape justice, to a tale of double and triple crossing. It’s often hard to follow, and I don’t think that is from lack of concentration. The problem is that motivations are not always clear. Dino’s idea to discredit Lindley seems odd for a start. If Lindley is thrown off the case it won’t stop Dino from being taken to court and another barrister taking over. It might improve his odds, as Lindley is so brilliant at his job, but it’s far from being a guarantee, and he keeps talking about 7 years of his life as if his plan will guarantee his acquittal. His intended outcome seems to be for Lindley to remain on the case, but with a tarnished reputation, but the path to that goal is obviously paved with stumbling blocks, and also doesn’t seem like any kind of guarantee that it will affect the outcome of the case.

Then we have all the double-crossing, which often has similarly fuzzy motives, particularly Dino’s betrayal of Cochrane, the man who surely holds the only key available to Dino’s freedom. I suspect the writer included explanations for all the back-stabbings, but it’s all such a tangled web that you wonder how the people involved could even keep track of what’s going on. Either way, there is a bigger problem: the plot turns on a couple of huge coincidences, and coincidence is the enemy of good writing. The less problematical of the two is Lindley’s daughter Beth (Jennifer Daniel) just happening to be in a little corner shop at the right time to listen in to Cochrane’s tactful enquiries after her father (unless she is tailing him from the start, but again it’s very confusing). The really silly one is the twist in the tale that reveals Beth was the missing link in the chain of clues, the woman who was secretly working with Dino to fake the Zurich letters, which is absolutely absurd before you even think about the likelihood of her father just happening to be the barrister chosen to prosecute her partner in crime. Perhaps if I watched this a second time the pieces of the puzzle might fit together, but it’s too tedious a film to make it worth the effort.

However, I do continue to enjoy this film series’ approach to finding alternative people to investigate criminal cases. I doubt a barrister doing a detective’s job makes much more sense than an insurance investigator or an estate agent placing themselves in danger in the same way, but it makes for an entertaining shift in the usual dynamics of these kinds of crime dramas. But Return to Sender also shares a common problem with many of the Edgar Wallace Mysteries. In the end, it all comes down to a punch up and a bullet.   RP

Read next in the Junkyard… House of Mystery (1961)

Co-writer on junkyard.blog. Author of windowsintohistory.wordpress.com. Editor of frontiersmenhistorian.info
View all posts by Roger Pocock →
This entry was posted in Entertainment, Movies, Reviews and tagged Crime, Return to Sender, The Edgar Wallace Mysteries. Bookmark the permalink.