Posted on March 1, 2022 by DrAcrossthePond

Voyager’s Return is another scenario where the writers of Space: 1999 wanted to remind us that we’re watching a science fiction show, and there should be some acknowledgement of real science in these stories.  In this case, one of the Voyager probes is making its way back to earth after 15 years in space.  Victor immediately realizes that it will have loads of scientific data recorded which could be immensely helpful to them but it’s powered by the Queller drive which destroys everything it gets near.  So 95% of the base wants to destroy it and Koenig thinks it’s a good idea to listen to the one dissenting voice.  In fairness to him, they are in a very unusual situation, and any data could be potentially helpful, so it does make sense in the grand scheme, but it still seemed like a weird call.

I’ll say one thing for Koenig: while he’s no Jim Kirk, he has a better record of keeping people alive.  In this episode, one dies at the start because they didn’t know what the probe was until it was too close and the other sacrifices himself – more on that in a moment – but that means that this is the first time we’ve lost people since the second episode.  Contrast that against the Enterprise’s mortality rate!  (For those keeping tabs, we now have 304 crewmen on Alpha: 311 in Breakaway, then 5 died in Force of Life, 2 now.)

Anyway, for me, the episode was a mixed bag.  Partly, I saw it as addressing the environmental concerns of the 70’s (when the show was made) and the worries about nuclear radiation.  It also does a whole character study on remorse and atonement when Queller himself, the man responsible for this nasty technology, just happens to be working on Alpha under a changed name.  He works on disabling the drive remotely so they can recover what knowledge they can.  This is met with some strong sentiment, as at least 2 members of Alpha’s crew have lost family due to Queller’s invention.  His assistant beats him up, almost costing them the mission, but then realizes that Queller is trying to atone for his choices and forgives him later. 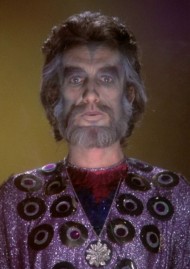 The episode spends a huge amount of time on the buildup.  They have 9 hours to deactivate the drive or they have plans to use some of the Eagles to shoot the craft down.  If you think this will follow the predictable format where the heroes save the day within seconds, think again! The timer actually runs out but Koenig still refuses to give the order to fire.  As the base shakes apart, Queller does succeed in landing the craft… only for the second problem to kick in.  Aliens have been following Voyager back to Earth to wipe out all human life because Voyager wiped out two of their “Federated Worlds”.  (They look like Star Trek aliens too!)  Queller makes a plea about forgiveness and asks if they could just punish him since he created the weapon of mass destruction, but they cast judgement on all of humanity so Queller decides that they are no more worthy of life; if that’s their attitude, he’ll show them!  He wipes out the approaching ships by stealing the Voyager, flying towards them, reactivating the drive, and killing himself in the process. Yay, Queller!

“Many people have placed science before responsibility,” says Russell. I think that expresses the whole moral of the story, and Queller has now done the responsible thing.  It is a good message, but I’m torn on a few counts.  First, even as the ships were approaching, Koenig never tried to hail them.  He never tried to explain things or even debate with them.  While Kirk may lose more people, I think Koenig was sitting on his hands in ways Jim never would!  Bad job, Johnny boy.  But more than that: will we gain knowledge from this episode?  I never thought of this show as being one that honored continuity, but it does seem to be aware of the personnel shortage and maybe there will be something they talk about going forward.  Or perhaps, Voyager’s data was not that meaningful to their situation, as a moon that has effectively been turned into an out-of-control spaceship hurtling through the cosmos.

I think we have a meaningful episode, if not a particularly exciting one.  But the characters are growing on me.  Even Helena Russell seems to be becoming a real person.  Took Pinocchio a whole fairy tale to make that happen!    ML