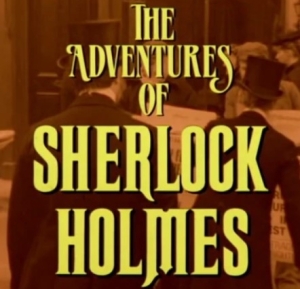 “This case is not clear to me!”  We have a very interesting case this week when a man comes to see Holmes to proclaim innocence of a crime he has just read about in the paper.  He was unaware of it until seeing his own name in the paper and, with a good deal of clarity, makes a beeline to see the Great Detective.  The local police are hot on his trail…  Once again, we have a very clever story for Holmes and Watson to solve.

This is one that stuck with me when I’d read the book.  Seeing it dramatized was a very enjoyable experience.

A man is found burned to death in a fire and all the evidence points to lawyer John Hector McFarlane.  Since McFarlane just helped write up a will for one Jonas Oldacre, in which all of Oldacre’s belongings were being left to McFarlane upon his death, he is the most likely suspect in the murder.  McFarlane’s walking stick is found with blood on the handle, indicating he beat Oldacre before setting fire to the house.  McFarlane insists he is innocent and when Inspector Lestrade shows up to arrest him, Holmes asks for 30 minutes to hear the story.  And this is where things get really interesting…

Owing a tidy sum to debt collectors, Oldacre plans to “die” and claim insurance money with the help of his housekeeper.  Years earlier McFarlane’s mother had been engaged to Oldacre but left him because he had an cruel streak a mile wide, so he contrived a plan to hurt her through her son.  This is a man who holds a grudge!  He frames McFarlane with the help of his housekeeper, misplacing the walking stick while McFarlane visits and going so far as to plant a fake evidence in the form of a bloody fingerprint.  Oldacre wants to hurt McFarlane’s mother by having her son hang for murder then make off with insurance money to boot!

The fingerprint left by Oldacre was not there the first day of the investigation and Holmes knows that.  He soon realizes something is very much amiss and begins running around the house.  He observes that one room is too small and doesn’t match the size of those above or below it.  Deducing that there is a secret room, Holmes “sets fire” to the house.  When Sherlock, Watson and the police raise the call of fire (in reality, little more than a small blaze in the fireplace, but creating a lot of smoke), Oldacre emerges from his hiding place… in front of Lestrade and Holmes.  When Oldacre tries to say it was all a joke and he committed no real crime, they remind him of the corpse found in the original fire: the corpse of a local tramp who was tricked and killed to supply the body of the presumably dead Oldacre.

As Oldacre is taken away, he tells Holmes that he’ll see him hang for what he’s done.  Holmes replies coolly, “That privilege must surely be mine!”

Watson has to get a lot of credit here.  He deduces that there are important papers missing from the safe after the original blaze.  Plenty of non-essential documents are located, but the absence of the important ones speak volumes to him and he investigates.  Watson truly helps Sherlock in this investigation.  And watching Holmes disguise himself as a tramp is fun; I almost feel like I should have a list of all the disguises he uses in the series!

“This is really most gratifying!” Holmes is exactly right; a very enjoyable case with a real twist in the tale.  The casting choices were excellent and each actor brings the parts to life vividly.  I still say, these are the definitive episodes of Sherlock Holmes!  ML