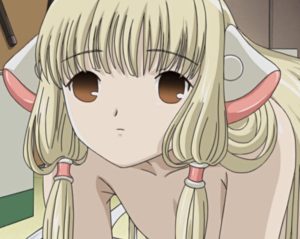 Predictions of the near future date badly, very quickly. I’m still waiting for my hoverboard from Back to the Future, for a start, and I should have had that by now. That weather control station on the moon from Doctor Who’s The Moonbase isn’t looking too likely either. Chobits is set in a future where everyone owns lifelike robot helpers called persocoms, which doesn’t seem like a bad guess (albeit one that’s probably not going to happen any time soon), but the series was made in 2002, so credibility is stretched to breaking point already by details such as connecting the robots to televisions with RGB cables, the internet depicted in its infancy and how a lot of people don’t seem to know what email is. This is an awkward fit with robots who are so close to human that some men are starting to fall in love with them.

Note I specified “men”, and that’s because nearly all the robots are female, so this is to a certain extent a male fantasy fulfilment anime. A couple of the persocoms are tiny and cute, which helps to balance out the perviness with some wholesomeness (and they are both a lot of fun: the energetic Sumomo and the deadpan-witted Kotoko). The fanservice is also kept to a minimum considering the subject matter, and is rarely the focus of an episode. In fact, the fanservice is perhaps a bit too mild. That might seen like an odd thing to say, but it really robs this imaginary future society of its realism when the reactions of teenage boys to possessing cute robot girls is so innocent and restrained most of the time, with those who indulge their passions always shown in a negative light as perverted and twisted individuals. That doesn’t make a whole lot of sense considering that on a basic level most of the men own sexbots, and the wholesomeness sits uncomfortably with moments such as the first activation of Chi, achieved by finding a switch located inside… well, let’s just say the term “turning her on” takes on a double meaning.

The other troubling aspect of this series is that the persocoms are obviously a representation of a particular male fantasy of female perfection: pretty, servile women who perform tasks for men and exist to please them. But the writer doesn’t just offer that up on a platter and say: look at this; isn’t it wonderful and exciting. Instead, the series tackles issues that would naturally be raised in a society such as this. The persocoms are very close to human, but not quite, so what does it mean when somebody falls in love with one of them? How does owning a persocom effect a man’s relationship with his girlfriend or wife? What happens when somebody is so obsessed with persocoms that they withdraw from the real world? This treads a path daringly close to referencing a subsection of anime fandom, who obsess only about a fantasy world and can’t speak to a “3D girl”.

While the series is exploring those kinds of issues, and tackling them very effectively, there are also some mysteries that run through the 24 episodes (plus 3 recap episodes, but you’ll probably want to skip those). Hideki Motosuwa is a failing student who finds a persocom thrown out in the trash. In some ways she seems to be broken, having to learn how to communicate, but in other respects she is more advanced than any other persocom in existence. Her origins are shrouded in mystery, as is the nature of the special powers she possesses, and what the consequences of unleashing them might be. At times she seems almost magical. The other important people in Hideki’s life are all interesting and every one of them has something to hide: his neighbour and best friend, his teacher, his co-worker, the bakery owner who offers employment to Chi, and even the manager of the apartment building where he lives. The subplots all mesh together very cleverly, and all of them are resolved by the end of the series; they are great storylines, often highly emotional. But of course at the heart of the series is Hideki’s relationship with Chi, the way she helps him through extreme poverty, their developing attraction for each other, and the journey of learning and self-discovery Chi goes on, helped by a series of mysterious books that seem to be a metaphorical representation of her own life. If the awkward half-sexualised, servile representation of male/female future relationships is something you find difficult to watch, you’ll want to get past that, because this series is intricately-plotted, mysterious, satisfyingly concluded, and emotionally challenging. If only more shows provided a fully-resolved, thought-provoking and moving story like this, within the constraints of a single season. The shows that do that are rare, and tend to number among the best series anime has to offer. Chobits doesn’t quite fit into that category, but its heart and mind are both in the right place.   RP

Co-writer on junkyard.blog. Author of windowsintohistory.wordpress.com. Editor of frontiersmenhistorian.info
View all posts by Roger Pocock →
This entry was posted in Anime, Entertainment, Reviews, Science Fiction, Television and tagged Chobits. Bookmark the permalink.