Legend of the Sea Devils 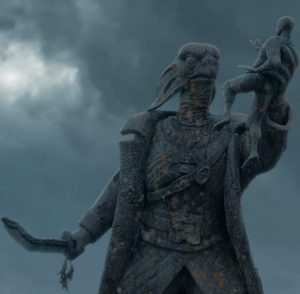 The Sea Devils are among the second flight of Doctor Who villains, but it feels like a refreshing change to have them back after so many years. The constant return of the big hitters, particularly the Daleks, has been starting to feel repetitive. By and large, Chris Chibnall has been a show-runner who looks to past successes and does something similar again, and this is really no exception because it’s the same old story about Silurians / Sea Devils reawakening to reclaim the land / sea they walked / swam before humans. Delete as appropriate. It’s all the same basic idea, and we’ve seen it at least four times now. But at least it’s not the Daleks. This old story feels quite fresh now.

The episode also represents the Sea Devils at their most impressive, mainly thanks to advances in technology. They were always an idea that was tough to bring to screen successfully, particularly their pet Myrka in their most recent appearance, which fell into the category of a great idea but lacking the means to make it work. The Hua-Shen is fulfilling exactly the same role in the story as the Myrka and might well be the same thing with a different name; it really doesn’t matter. But the paint’s most definitely dried on this one and there’s nobody trying to defeat it with a karate kick. Actually, that last bit was slightly disappointing…

The Sea Devils themselves are now a lot more visually impressive. They never quite get away from the actor in a mask territory, but at least there is some indication of where the voice comes from, and the eyes aren’t quite so lifeless as they used to be. In their last appearance, their whole head was basically a hat worn by the actors. This is a huge improvement, but is still limited compared to most modern Doctor Who monsters. There is virtually no range of expressions, so they never quite come to life as individuals. Ironically, a race of clones like the Sontarans have more personality, and we didn’t really need another bunch of homogeneous monsters like the Daleks or Cybermen. Having said that, this episode all looks spectacular, especially the huge ghost ship and the Sea Devil statue. The opportunity is also taken to acknowledge that one of the most amazing places in the universe is under the sea of our own planet; that was a lovely little sequence.

Being as this is a Chibnall co-written script, it’s typically all over the place, with the TARDIS being used as a way to join together brief scenes in different times and places. That takes away some of the sense of jeopardy, or at the very least the immediacy of that jeopardy, because the Doctor can leave behind one companion, head off to a different time, and take as long as she likes, knowing she can simply return whenever she wants, with little or no time elapsed from Dan’s point of view. There’s never much of a sense of the clock ticking, and it’s all a bit easy for the Doctor. She is even helped out by an obligatory hero who is willing to sacrifice his life for her, something she’s all too happy to accept. That happens far too often. There was once a time when Doctor Who had a show-runner who sweated those kinds of details, and built narratives on the issue of people dying for the Doctor. Now it’s little more than a gleeful dash off to the next disparate moment in the frenetic tale, while another body is left in the Doctor’s wake. It doesn’t feel like she cares about that kind of thing any more, and in contrast the one attempt to make her come across as a person with real emotions falls as flat as a pancake. The Doctor giving a lovestruck companion the brush off, on the grounds that their happiness would end at some point, is just another Chibnall delve into standard procedure from the show’s past. It’s all somehow unintentionally soulless, like this whole episode.

As special episodes go, there’s plenty of fun to be had here, but it feels like a lot of spectacle and rushing around that might appeal to children, with little to engage the brains of any adult viewers. I’ll take that any day over the Capaldi era, which spent most of its time rejecting the young audience, but it feels like a long time since Doctor Who has really sailed that course that could be truly described as family viewing with a mass appeal. The magnificent, surprising teaser at the end of this episode promises much. Maybe some of the show’s old magic can be recaptured, even before a safe pair of hands takes the helm once again.   RP

The ad said it was “swashbuckling” and it was… I was pleased to see that Chris Chibnall, undoubtedly with the help of co-writer Ella Road, pulled off an entertaining episode.  Jodie’s Doctor is back with Yaz and Dan for an enjoyable adventure with the Sea Devils and these creatures look great.  More importantly, they sounded great.  That glorious scream was back!  But while Chibs and Road got a lot right, it wasn’t all perfect.

I’d say the most notable thing was the Sea Devil himself.  He’s got a bloody great big mouth but acted like he had gone to Ventriloquism School, opting to keep his lips parted, but never moving, prefering to have all the sound emanate from his throat. There’s also the fact that he’s utterly brutal but allows the Doctor to stroll around his oxygen filled base poking and prodding things.  Why, I ask you, did the Sea Devil have a base that was not filled with water?  Then the Tardis crew fails too because, since when were Dan and Yaz swordsmen?  They dispatch enemies like pros, but I had no idea either took fencing.  Sure it’s possible, but it seems very loose on the characterization front!   Oh yeah, and Dan is quite a swimmer, heading out to the pirate ship parked a mile out in the bay.  I tried a feat that wasn’t half that and ended up with a hernia!

“No ship, Sherlock!”  There are equally a number of impressive moments.  The visuals are amazing and you can’t tell me the undersea moment wasn’t stunning.  There are some dialogue triumphs too, like when Dan and his new friend, Ying, are facing the pirate queen and she shows them an ear in a box.  Ying asks if it’s hers to Dan’s surprise.  He whispers that she has both of her ears!  And I love lines like this – but because people say it to me all the time and I feel like I’m living in another dimension: “I don’t understand half the words you say!”  At least I’m not alone.

But the best moment comes when the good guys defeat the lead Sea Devil, even though I confess, I felt was dispatched too easily.  The Doctor angrily says, “You didn’t have to kill him!”  I applaud when the good guys are actually good guys! On the other hand, I’d hold it against the writer (but it’s Chibnall and you can tell) when Dan then dispatches a whole wall of Sea Devils with a single sword flick.  Give me a break. The thing is, as much as I enjoyed the episode, it does leave a lot of gaps.  Madame Ching is fighting to get her sons back (great parallel with what happened with Ying and his father) but upon defeating the Sea Devil, there’s no further talk of doing that.  I thought the Sea Devil had the children anyway, but evidently not.  Also, when the Doctor has to get back to the fleeing Sea Devil ship… how does she do it??  And what became of that massive sea creature?  The Sea Devils were defeated; it said nothing of the giant beast. Guess there’s nothing stopping that just roaming the seas forever…

Despite its flaws, it’s a fun adventure and one I’ll be watching again in days, but it’s far from flawless.  That’s been the overriding characteristic of Chibnall’s era – some good, but nothing remarkable.  I long for the era of Peter Capaldi’s final season.  At least we got a much needed discussion between the Doctor and Yaz.  If nothing more, this may have been the highlight of the story: the Doctor trying to explain to Yaz that she’s afraid to get too connected.  We saw this at its best with School Reunion, but it’s a lovely concept because the Doctor doesn’t age like we do and she feels the loss of those she cares about deeply.  The episode took place deep underwater but the part with the greatest depth came from the heart.  ML

Co-writer on junkyard.blog. Author of windowsintohistory.wordpress.com. Editor of frontiersmenhistorian.info
View all posts by Roger Pocock →
This entry was posted in Doctor Who, Entertainment, Reviews, Science Fiction, Television, Thirteenth Doctor and tagged Dan, Jodie Whittaker, Legend of the Sea Devils, Yasmin. Bookmark the permalink.

3 Responses to Legend of the Sea Devils