The Edgar Wallace Mysteries: To Have and to Hold (Review) 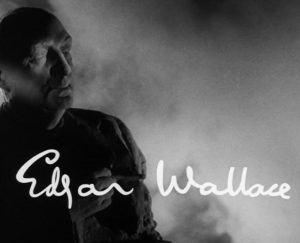 Apart from Carry on Sergeant, I have never seen William Hartnell in anything other than Doctor Who, which is probably a major omission for a fan of the show, so I was very pleased to see him among the cast of this Edgar Wallace Mysteries B movie. I was also pleased to see what an excellent actor he was beyond the world of Who, although that was no great surprise. He was a popular actor, and it’s obvious why he was chosen for so many military roles. He had an effortless air of authority about him, which he brought to the role of the police chief here. It was just a shame he didn’t have a bit more to do in this film.

Instead, the focus is on his subordinate, Henry Fraser, played by Ray Barrett, who would soon be facing off against Hartnell as a Doctor Who villain in The Rescue. Based on this performance, he was better suited to playing villains than heroes, because he makes for an unlikely protagonist here. It’s very hard to warm to the character. Part of that problem is Barrett’s often blank-faced delivery of his lines, in a role that called for much more passion. Faced with a story that required the character to fall deeply in love in two days, and then fall deeply in love again in a week, the only way to make that work is for the actor to really sell the emotion, but Barrett misses the mark and makes Henry seem sleazy instead, which I doubt was the writer’s intention.

Having said that, Barrett wasn’t helped by the writing either. Henry is immediately a terrible policeman, chatting up a vulnerable, frightened housewife, and then failing to actually protect her, which might have gone some way to justify his actions. Instead, he lets her go off back home on her own while he goes shopping, and returns for his date to find her dead. He then greets her husband with a punch. His boss’s decision to send him off on leave and take him off the case seems eminently sensible given the circumstances.

At exactly the halfway mark of the film we get a great twist, with murder victim Claudia turning up still alive, and then revealing she is actually the twin sister. Having decided Claudia’s husband George (Nigel Stock) was the murderer, they concoct a plan to bring him to justice, but after a few days Henry starts obsessing about the twin sister and trying to seduce her, to the extent that he forgets about what they are supposed to be doing. At this point I don’t know how anyone could be anything other than sickened by this man, and the film becomes very hard to enjoy, with such an unpleasant hero character. On a basic level, this is a rerun of Playback, an earlier film in the series in which a policeman strayed into a life of crime for the love of a woman. The difference is that Dave Hollis was sort of swept away into a world of trouble whereas Henry is very much the engineer of his own problems. He makes it all too easy for his enemies to play him for a fool.

With that in mind, it was great to see Henry’s murderous and fraudulent plan turned against him, although I’m not sure that was the reaction the writer was hoping for. The pleasure could only be schadenfreude and the enjoyment of a very neat turning of the tables, because it’s not as if we could root for George the brutal murderer either. This is sometimes the problem with the Edgar Wallace film series: absolutely nobody to like, and if we don’t like any of the characters, it’s hard to muster up any strong feelings about what happens to them. Appreciation of the film becomes nothing more than an intellectual exercise, and fortunately this one has enough clever twists to make that work. As for the fate of the main characters, when the bullets started flying I didn’t really care who they hit. When a film fails to provoke an emotional response other than curiosity, that’s a fundamental failing of the writing.   RP

Read next in the Junkyard… The Edgar Wallace Mysteries: The Partner

Co-writer on junkyard.blog. Author of windowsintohistory.wordpress.com. Editor of frontiersmenhistorian.info
View all posts by Roger Pocock →
This entry was posted in Entertainment, Movies, Reviews and tagged Crime, The Edgar Wallace Mysteries, To Have and to Hold, William Hartnell. Bookmark the permalink.

1 Response to The Edgar Wallace Mysteries: To Have and to Hold (Review)