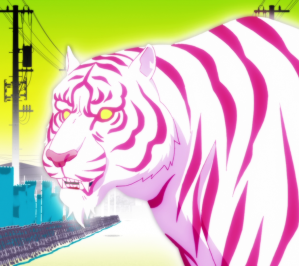 I have previous watched, enjoyed and written about Bakemonogatari, Kizumonogatari, Nisemonogatari and Nekomonogatari (Black). Next up in the sprawling Monogatari saga is the longest season of all, Monogatari: Second Season. It is a run of 23 episodes, but consists of individual arcs with their own titles. Further complicating matters is Hanamonogatari, which belongs in the middle of this season but was delayed and released on its own. The physical media releases are the individual arcs, and that’s how I’m going to cover this season, starting with the five-episode Nekomonogatari (White).

As the title would suggest, we continue the story of Tsubasa and the Cursed Cat that possesses her and takes over her body when she is asleep. It is a very unusual arc, because Koyomi hardly appears at all, entirely absent for the first four episodes, so it’s an odd way to relaunch a show with the main character not even in it. Instead, Tsubasa becomes our main focus character, and for most of the arc she is living with Hitagi, after her own house is mysteriously destroyed in a fire.

If you didn’t like how philosophical and talky this show was at times during its first season, you might want to skip this arc altogether and go straight to the more plot-driven Kabukimonogatari, because the first few episodes consist of little more than Tsubasa and Hitagi talking to each other in a room. You need to be quick at reading subtitles, or you’ll be hitting the pause button a lot. The finely crafted dialogue is an art in itself, and the visuals are modern and stylish, as we have come to expect from this show. The character designs seem to have been updated since the previous season, to the point where I was struggling to recognise who they were at the start. I felt that Hitagi’s appearance was not an improvement, a less distinctive character design, but Tsubasa’s is much better, with a less unrealistic body shape than before (while she’s clothed, anyway). Some of the more annoying aspects of her characterisation seem to have been toned down as well, perhaps due to her interaction with somebody other than Koyomi. She is still my least favourite character in the show, but five episodes with Tsubasa in nearly every scene were at least watchable, which I don’t think would have been the case for the first season iteration of her character.

Eventually she moves in with the fabulous “Fire Sisters”, while Koyomi is absent, enjoying the oddness of living in the room of the boy she loves while he is away. There is very little story here, as such, but the arc concerns Tsubasa’s encounters with a mysterious (and visually stunning) giant Tiger, and the different sides of her personality are explored via the cat and the tiger. The key to being able to confess her love to Koyomi is for Tsubasa to integrate and utilise both light and dark aspects of her nature, so there is an interesting examination here of the human condition, with the felines serving as literal manifestations of personality traits that most fantasy shows would only be able to deal with metaphorically. The result of her confession is unsurprising, but what follows is a great moment, with Tsubasa’s hair literally representing her newfound inner strength, while she faces up to issues she has with her own family. 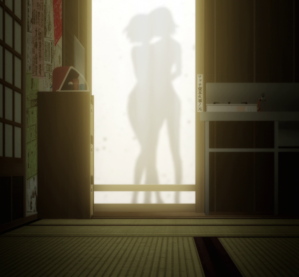 So there is some good stuff here, but it takes five episodes to accomplish what could really have been done effectively in two. I wouldn’t go so far as to say that the endless conversations are a waste of time, because they are as thought-provoking as we would expect from this show, but I’m not sure we needed to see Tsubasa and Hitagi showering together with their hands all over each other. It’s as if this show doesn’t quite know what it wants to be: modern art in animated form, exciting fantasy stories, or lazy fanservice. The first two of those work surprisingly well together, but the third is sometimes an uncomfortable fit, with occasional gratuitous moments seeming out of place, fleeting and distracting, in a show that otherwise serves as mind candy. But stick with it. These five episode left me impatient to move on to something new. I’m one episode into the next arc, and it looks like it’s going to be a much more exciting story. Koyomi is heading back into the past, and it’s always dangerous to mess with something you don’t understand…   RP

Read next in the Junkyard… Kabukimonogatari