The Man in the Back Seat (Film Review) 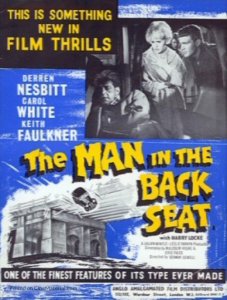 The bonus film on the fifth volume of the Edgar Wallace Mysteries DVDs takes us back to 1961, for a Malcolm Hulke and Eric Paice adaptation of an Edgar Wallace thriller. This is a film noir effort, which showcases what can be achieved by a B movie that is tightly plotted with a small cast, and it eclipses most of the other films in this set.

The main characters are criminals, with fate conspiring against them, and we are drawn into a slightly odd position of rooting for them to succeed by the writers. This happens because they are having a terrible run of bad luck and instinctively we want them to triumph over fate. This places us in the slightly odd position of caring about whether these two men succeed or not, despite one of them almost beating a man to death. That makes for uncomfortable viewing, and I think the writers realised how much they could play with the mixed feelings of the audience. Frank’s wife Jean is the voice of our conscience, horrified by what her husband has become involved in, but eventually trying to make the best of a bad situation. At stake is the life of the victim, the life of her husband and his friend, who will face execution if their victim dies, and a lot of money. Part of the reason we find ourselves at least partially on the side of the criminals is that they are our perspective characters for the entire film, but more importantly Jean helps us to realise that one possible outcome here is that everyone loses.

This is one of those stories where things escalate out of control very quickly and get worse and worse. There are similarities with Five to One, which we looked at last week, which also makes the criminals our perspective characters, and shows how plans go awry and a bad situation gets much worse when people don’t know when to quit. Tony and Frank mug a bookie, and then find his bag full of cash is chained to his arm. Frank wants to scarper. Tony, who is the dominant personality in their friendship, insists they drive off with the unconscious victim and find a way to break the chain. This is the first of many such moments, where Tony wants to cut his losses, but Frank won’t let him. The moral here is how a one-sided friendship can go badly wrong. We get the impression that Frank idolises Tony to a certain extent, despite Frank being the one with a job and a wife, and where Frank leads, Tony follows. Frank takes full advantage of his trust, and at one point attempts to leave him in the lurch and make off with all the money. Eventually, Frank betrays Tony in the most horrible manner, tricking him into ending the victim’s life. It’s grim stuff, but brilliantly played by the two actors, Keith Faulker as the increasingly anxious Frank, and Derren Nesbitt as Tony, who is so softly spoken and polite that it’s not difficult to see how he could be so believable and persuasive, and twist that skill to his advantage.

There are some frustrations along the way. The obvious problem is the focus on breaking the chain instead of cutting into the bag. It’s hand-waved with a comment about the difficulty of doing that, until eventually Frank goes to get a knife from his flat, but this is their second visit to the flat. The first time he gets a hammer and chisel, and then there’s a lot of going around in circles trying to find a flat surface on which to break the chain. Even when Frank goes to get the knife as an afterthought, Tony sets about chiselling off the chain while he’s waiting for Frank, which alerts Jean. The writing is slightly clumsy, but this is very much a triumph of style over substance. The acting is superb, and it’s a very claustrophobic affair, set mainly in the car driving around the city streets at night, with occasional visits to a dingy little flat. The ending is very creepy, with more than a hint of the supernatural. It leaves us wondering whether Frank loses his mind in the end, or if his victim really does get his revenge from beyond the grave. Have you ever had one of those dreams where everything goes wrong, stopping you from achieving whatever goal your subconscious mind has invented? If somebody of a criminal mindset dreamt one of those dreams, it might just look like this.   RP

Read next in the Junkyard… The Edgar Wallace Mysteries: Downfall

Co-writer on junkyard.blog. Author of windowsintohistory.wordpress.com. Editor of frontiersmenhistorian.info
View all posts by Roger Pocock →
This entry was posted in Entertainment, Movies, Reviews and tagged Crime, The Edgar Wallace Mysteries, The Man in the Back Seat. Bookmark the permalink.

1 Response to The Man in the Back Seat (Film Review)