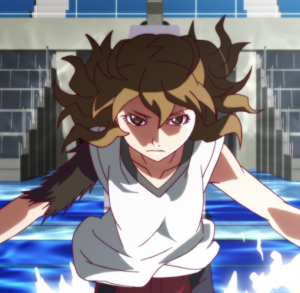 Regular visitors to the Junkyard will remember that I have been watching the second season of Monogatari, and have so far written about Nekomonogatari (White) and Kabukimonogatari, which leaves three arcs still to watch. I have paused from that season to watch Hanamonogatari, a five-episode series that was broadcast after the second season of Monogatari, but was postponed and actually belongs here in terms of the overall chronology. During Monogatari Series: Second Season we have been methodically revisiting the lives of the main characters from the first season, all girls who were afflicted with some kind of animal spirit possession. So far we have returned to the lives of Tsubasa and Mayoi, and now it’s the turn of Suraga.

In the first season, the Suraga Monkey arc explored how Koyomi’s junior Suraga was possessed by a mummified monkey arm, and despite being cured of the possession her arm remained monkey-fied, with Suraga having to keep it covered with bandages. Suraga also became good friends with Koyomi and his girlfriend Hitagi, and the beginning of this arc sees her missing her friends now that they have graduated and she has to continue school without them. Like the Tsubasa Tiger arc at the start of the season, this arc is defined partly by the absence of the main character, and how his friends cope without him. This is a series that has never been scared to write Koyomi out for a while, in order to focus strongly on another character. It also captures that bittersweet transitional period of youth where teenagers are moving on to pastures new and some get left behind and struggle to cope with their changing lives. This is a time where some teenagers have to stand on their own two feet for the first time, and Hanamonogatari is very much about Suraga dealing with her own problems. She makes for a very watchable focal character, and not just because of her exhibitionist tendencies.

This arc does something Monogatari is often absolutely brilliant at: starts off with an antagonist/protagonist setup, and then progresses to a more nuanced conflict where there is no simple good/evil divide and only shades of grey. The antagonist in question is Suraga’s long-term basketball rival Rouka Numachi, who relieves Suraga of the problem of her monkey arm by stealing it from her. Interestingly, Suraga keeps wearing the bandages, and at first struggles to find her balance without the arm, which shows how much a part of her it has become and she naturally has mixed feelings about its loss. It turns out that Rouka is collecting these unnatural body parts from victims of the possession, but why would somebody want to inflict that on herself?

He backstory is fascinating, and shows how somebody can almost accidentally become a person who saves other people, by first acting in their own interests. Many readers will probably be aware of the philosophical question of whether a truly selfless act exists, but this goes a little further than that, because Rouka’s quest begins with the impulse to “collect” the misfortunes of other, which made her feel a bit better about her own affliction in comparison. That all sounds a bit twisted, but I suppose it’s understandable. If we all take a long, hard look at ourselves, we might have to admit that the misfortunes of others light a little spark inside us that makes us feel better about our own lives simply because we are less afflicted. But once again this goes further because the selfish motivations soon evolve to become a genuine desire to help people by taking away their problems, even if that means carrying their burden for them, and that in itself starts from a position of selfishness rather than selflessness, because living with a possessed leg is better than a crippled one for Rouka. She has also learnt that she can go further, and promise to magically solve people’s problems. It’s a con trick that ends up helping a lot of people because either things get better for them through the power of autosuggestion, or at least she is able to refer the most extreme cases to appropriate authorities or organisations. These are some deep waters, and they become deeper still when Suraga discovers something about Rouka she doesn’t know about herself. It all culminates in a basketball contest between the girls with very high stakes, which is a visual treat and concludes with a satisfying and heart-warming resolution to Rouka’s story. Enough time is left at the end for Suraga to meet up with Koyomi again and have a debriefing, while looking to her own future. I loved this arc.

Next time we will be back with Monogatari Series: Second Season for Otorimonogatari and it will be Nadeko’s turn in the spotlight, but her snake possession was defeated and gone, right? Well, one thing this series keeps illustrating is how things don’t always stay buried forever, and the past has a habit of coming back to haunt us…   RP

Read next in the Junkyard… Otorimonogatari

Co-writer on junkyard.blog. Author of windowsintohistory.wordpress.com. Editor of frontiersmenhistorian.info
View all posts by Roger Pocock →
This entry was posted in Anime, Art, Entertainment, Reviews, Television and tagged Fantasy, Hanamonogatari, Monogatari. Bookmark the permalink.