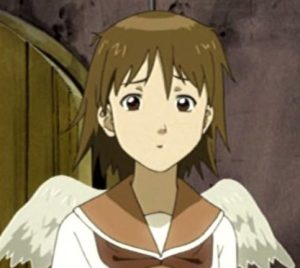 This series is 20 years old now, and watching it today is a reminder of how much anime has moved on in the last couple of decades. There is generally a lot less movement in the animation nowadays, but watching an older show like this isn’t necessarily a hugely impressive experience, as the picture quality on the DVD is hardly great to say the least, but this one was an impulse purchase at a cheap price in a second-hand shop, so I didn’t feel too cheated. The main thing is the story being told, and this is an unusual one.

The main character is Rakka and she experiences what seems like her death, falling from the sky, before waking up in a cocoon and hatching out into a world where she seems to be surrounded by angels. These are the Haibane, who have wings and halos. However, any assumption that this is some kind of a paradise is soon proved wrong, when Rakka’s wings burst their way out of her back in a mess of blood and pain.

We are never told what we are actually watching, and I don’t mind that too much. The obvious interpretation is that this is some kind of a limbo between life and the afterlife, for people who need to resolve something from their past before they move on. That idea occurred to me early in the series, and was constantly reinforced by the details, so I think it was probably the intention. The Haibane live in a place that is surrounded by a wall, and cannot cross over into the outer world until they deal with some kind of an issue, linked to recurring dreams. Rakka’s wings turning black and diseased also suggest some kind of an emotional stain. This is also a story of friendship, although not everyone in Rakka’s life is quite what they seem to be. The series gets quite angsty, especially when one of Rakka’s friends passes over the wall, and I found her subsequent depression a bit wearing to watch. This is not a show to choose if you want some light escapism in a fantasy world.

An oddity of the show is that the Haibane share their walled town with non-Haibane human characters, who treat them as second class citizens. The Haibane can’t earn money and are not allowed anything that hasn’t been discarded by the humans. It seemed very strange that humans would treat angelic beings (at least in appearance) in this way, and there didn’t seem to be any logical explanation for their treatment other than that’s just the way things are done in the town. I always find it a bit frustrating when a writer presents discrimination as an established status quo without subsequently having characters challenge the status quo robustly or at the very least doggedly seek an explanation for why things are so unfair. Again, we are probably supposed to draw our own conclusions: these are people who are stuck in limbo, atoning for some kind of a sin, and they are treated as something lesser than the humans until they can move on from their past sins, but the townsfolk don’t seem to be particularly aware of any of that, and just treat the Haibane as inferior because that’s how things are.

Rakka’s friend and mentor of sorts is Reki, and the mystery surrounding her past really brings the series to life for the last few episodes. When we get the truth it’s a very emotional moment, but also one that reaffirms the power of friendship. This anime had all the ingredients for a truly great show, and I know it’s a favourite for some anime fans, but for me it didn’t quite live up to the promise of the ideas it was exploring. Too much time was spent on Rakka’s grief after the loss of her friend, and there was altogether too much misery and not enough plot development to fill the episode count. After an interesting first couple of episodes, most of the season dragged until it really came to life towards the end when we got into the business of Reki’s past. We never did get to see what was beyond that wall, but sometimes our imaginations make the best pictures.   RP

Co-writer on junkyard.blog. Author of windowsintohistory.wordpress.com. Editor of frontiersmenhistorian.info
View all posts by Roger Pocock →
This entry was posted in Anime, Entertainment, Reviews, Television and tagged Fantasy, Haibane Renmei. Bookmark the permalink.