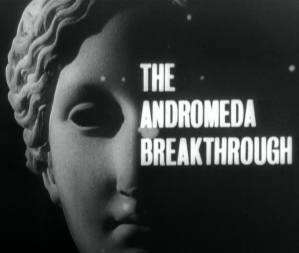 The third episode of The Andromeda Breakthrough takes us on a journey from bad guys being in charge of alien technology, to very bad guys being in charge of alien technology. Most of the episode is concerned with a revolution in a made up country. The political intrigue is well-written, but it seems like a distraction from the main thrust of the story. After all, what difference does it make to Fleming whether the computer is in the hands of the President of Azaran, or Colonel Salim? From Fleming’s point of view, he just doesn’t want the computer to exist at all.

This also has the problem of being an episode featuring Salim, played by an actor called Barry with lots of boot polish on his face, trying to seize power from the President of Azaran, played by an actor called Arnold with lots of boot polish on his face. Yeah, I know. 1960s and all that. But while other 60s series have aged well like a fine wine, this one has turned to vinegar. Let’s hope the final three episodes have something better to offer. An appearance from the aliens who sent the instructions for the computer would be a start, but I’m beginning to think that’s unlikely. Instead, the focus seems to be on the very slow revelation of their plans from afar, and whether they are really trying to help, as Andromeda claims.

We get the beginnings of an interesting philosophical discussion between her and Fleming. Andromeda claims that the plan is to use power for the good of humanity, something Fleming points out is a familiar line from many a dictator. The aliens, according to Andromeda, want to protect the good guys, and give them the technology to better themselves. Fleming thinks technological development should be earned slowly from scientific discovery, not handed to a civilisation on a plate.

“The world must be free to make its own mistakes or save itself.”

Fleming is our audience identification character, so it’s difficult not to side with him anyway, but he does seem to be talking sense. Having said that, it’s hard to watch his treatment of Andromeda, who is earnest in her beliefs. We learn this episode that something has gone seriously wrong with her, and she is going to “lose the use of her limbs progressively and finally her heart will stop beating.” It’s a horrifying thought, but Fleming seems to lack sufficient compassion for her. He is right that her personality has changed, now that she is communicating with the computer, but as Madeleine points out his bad attitude isn’t helping.

“If you’re awkward and hostile and don’t trust her then you’ll alienate her.”

The saddest moment, and the one that disappoints the most in terms of Fleming’s character, is when he offers the opinion that he should have left Andromeda to die, to which she replies that she will die soon anyway. The coldness from Fleming, and matter-of-fact-ness from Andromeda, is a far cry from the relationship we saw in the first episode of the season, with Andromeda greeting Fleming by flinging her arms around his neck and never wanting to let him go. What a shame.

Without much in the way of likeable characters, this season has become little more than an intellectual exercise, with the strategy of the computer the only interesting question. The really odd bit, that doesn’t seem to fit, is the “unusual weather conditions”, although I’m not sure a lot of rain in London really qualifies as unusual… well, it didn’t used to, anyway. Now heatwaves have become the norm, thanks to the damage we have done to the planet. Maybe the computer is right, and we shouldn’t be masters of our own destiny after all…   RP

Read next in the Junkyard… The Andromeda Breakthrough: Storm Centres

Co-writer on junkyard.blog. Author of windowsintohistory.wordpress.com. Editor of frontiersmenhistorian.info
View all posts by Roger Pocock →
This entry was posted in Entertainment, Reviews, Science Fiction, Television and tagged A for Andromeda, Azaran Forecast, The Andromeda Breakthrough. Bookmark the permalink.