Posted on December 20, 2022 by DrAcrossthePond 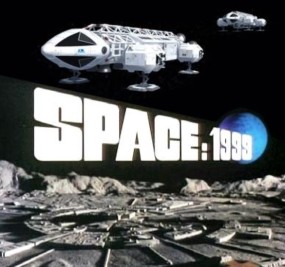 20 years after the series ended, it still had fans. If I’m being honest, I wonder how. I would understand and support a Maya Fanclub but the show was often slow and plodding offering a crotchety commander and a wooden second in command with Helena. Tony and Maya added a little something and one can’t deny the charisma of Alan Carter and Victor Bergman, but they did not make up enough of the crew to really make a difference and are only in the first season. Still, 20 years after the show was abruptly canceled, a fan production came out called A Message from Moon Base Alpha. It’s a nice coda to the series.

Sandra, the often missing command deck operator, is the last person on the base and she’s recording a message for any who find the drifting moon, which predictions say is heading back to earth. Life support is failing and they may not make it back. Luckily the Alphans have finally found Terra Nova and they are leaving Alpha. Koenig is alive. Maya is name checked, but we don’t know if she’s still there. A tribute is offered to many of the others including Victor though we still don’t know what became of him.

There’s a nice sequence of flashbacks and a reminder of a wonderful message the show offered: we are all alien until we get to know one another. And then Sandra says goodbye with her final words as they echo into infinity: remember us.  It’s a little eerie and a little sad.  Isn’t that what we all want, in the end?  Remember us!

I will. I’ll remember a show that made a lot of mistakes but tried hard. Helena’s day count made no sense and the episode order suffered as a result. The death count was all over the map and one wonders how many survived of the original 311 crewmen. I counted ____ in the series.  (Yeah, after season 2 ended, I realized it was impossible to count because of that idiotic numbered day counter!) I’d imagine over the next 20-odd years more would have died.  Who can say for sure?

But I’ll also remember a series that had some good ideas, deep points and some great sets and model work. “Eagle one” was destroyed frequently enough to make a comedy just on that idea alone. Helena never felt properly fleshed out and Koenig was irritable. Victor vanished after season 1 and was never mentioned again until this “episode” and he was one of the most likeable characters in the entire series. And of course, I’ll remember Maya, one of my first TV crushes and I still love her.  But perhaps there’s another explanation for the oddities between seasons and that could be found in the season one episode, “Another Time, Another Place“.  I was taking a shower one morning when this idea hit me!  I wondered if we could have been watching two different series between seasons 1 and 2.  So when I looked it up, I discovered, I wasn’t the first person to have this thought.  There’s an entire line of thinking that season 2 follows the other Moon Base that we see in the aforementioned episode.  Since Sandra says they might be heading back to earth, which of course is massively unlikely, who knows?  We’d already seen in Black Sun that there could be an intelligence behind their voyage, guiding them back home.  When the two moons parted in Another Time, Another Place, we just know they are going in opposite directions.  What if one was heading back to where it came from?  Then we could have been watching one through the rest of season 1 and the other in season 2.  A clever idea, I’d say.  Although whether we accept it or not, it doesn’t really matter in the end.  This was the product of a time before people were being conscientious about continuity.  But for those of us, like me, who like having logic in the story, maybe we can find it in the clues left behind.  Or we write it off.  It’s up to the viewer in the end.

Will we remember Space: 1999? Of course. It was one of the only shows of its kind during the 70’s. I appreciate it for what it was and I love that it left me with something to ponder.  A little mystery is a wonderful thing.  I do admit however, that I’m ready to explore a new era of Science Fiction history.  ML

3 Responses to Space: 1999 – A Message from Moonbase Alpha