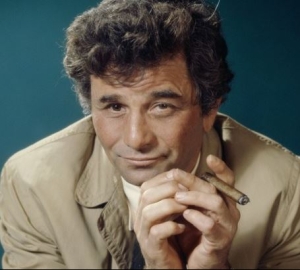 The DVD set I have of Season Seven of Columbo oddly mixes up the episode order. For most seasons that wouldn’t really matter, but Murder Under Glass is an interesting one to watch in its original context. Last time, we had a magnificent speech from Columbo to explain how he finds the best in people and normally ends up liking and respecting the murderers, not for what they have done, but because there is some aspect of niceness to everyone. Murder Under Glass immediately gives us the exception that proves the rule…

“I respect your talent, but I don’t like anything else about you.”

Paul Gerard is a restaurant critic who has made some establishments extremely successful with his glowing reviews. In return, he takes a 25% cut of their profits. If they stop paying, he will destroy their reputation with negative reviews. One of the restaurant owners, Vittorio Rossi, has had enough of this arrangement. Not only does he refuse to pay any more, but he is threatening to “tell the world what you are.”

Gerard extracts poison from a blowfish, and heads over to see Vittorio for a meal. He leaves early, with Vittorio still alive, but after he has gone a bottle of wine is opened, Vittorio has a drink, and dies. With the bottle selected at random, and opened after Gerard left, how did he poison Vittorio? What’s this? A mystery? We aren’t used to having to figure something out like that in a Columbo episode. It stops short of being a whodunit, but it’s a kind of a howdunit instead, breaking with the usual formula for the show.

Columbo suspects Gerard immediately, because he found out that Vittorio had been poisoned and didn’t bother to get checked out by a doctor, despite having just eaten the same food. Columbo also finds out that Gerard had arranged to pick somebody up from the airport at 8.55, despite having the meal appointment scheduled for 8pm, so he was never intending to stay for the meal. But his big mistake is trying to kill Columbo using the same trick as he used to kill Vittorio. If he wasn’t so reckless, Columbo would not have been able to prove his case.

This episode divides opinion, and I think that’s mainly because of Peter Falk’s acting. His performance is… bigger, here, which is a lot of fun, but perhaps lacking the realism of some of his earlier efforts. When it works, it works really well, such as the way he stares at Gerard before they even exchange any words, or later when he is asked if he has a suspect and says, “I’ve got my eyes on one”, while giving Gerard a very pointed look. On the other hand, he sometimes crosses the line into weirdness, particularly when berating a waiter in Italian or perving over a couple of Geishas for what seems like an eternity. He also seems to be enjoying this case just a little bit too much, turning into a sort of gourmand being plied with food wherever he goes.

Columbo whistling “This Old Man” has become an occasional running theme, but here it is more prominent than ever. It is used as a victory tune when he figures out exactly how the murderer killed the victim, blending into a rather jaunty, military arrangement, which also plays over the closing credits.

This one is a bit of a muddle. The crime itself relies on Gerard taking a massive leap of faith that Vittorio will open the bottle after Gerard has left, despite being in a rage and Gerard having walked out. Surely it was more likely that he would just return it to the cellar, and some poor unsuspecting customer at the restaurant would end up as an unintended victim? Then we have the convoluted trail of clues Columbo follows to figure out the sort of extortion racket Gerard was running and who else was involved, none of which has much bearing on the conclusion to the case. The writer makes a lot of the howdunit aspect of the story, presumably thinking it was the episode’s big selling point, although it’s relatively guessable and breaks the usual format in favour of something that isn’t as good as the normal approach. The point of Columbo is usually not the mystery of a whodunit or even a howdunit, but instead they are how-will-he-catch-’em stories. The answer to that question usually provides us with the big gotcha moment at the end of the episode, so each one lives or dies on how well that aspect of the plot is constructed by the writer. This week we have a relatively weak offering, with the killer behaving foolishly and recklessly in response to some obvious baiting from the Lieutenant, and Columbo failing to put together a case unless his enemy takes the bait. The final conflict between the two of them, which takes up the last 15 minutes of the episode, makes it all worthwhile. This is only the second time a murderer has tried to bump off Columbo himself, and it does feel dangerous and unusual. The hatred between killer and detective leaves a very different taste in the mouth. The writer throws in his ingredients haphazardly, but the unique nature of the crime makes this a dish worth sampling.   RP

Read next in the Junkyard… Columbo: Make Me a Perfect Murder

Co-writer on junkyard.blog. Author of windowsintohistory.wordpress.com. Editor of frontiersmenhistorian.info
View all posts by Roger Pocock →
This entry was posted in Reviews, Television and tagged Columbo, Crime, Murder Under Glass. Bookmark the permalink.

1 Response to Columbo: Murder Under Glass