Unusual Doctor Who Photo #9: The Technix

Who is William Hartnell joking around with in this photo? 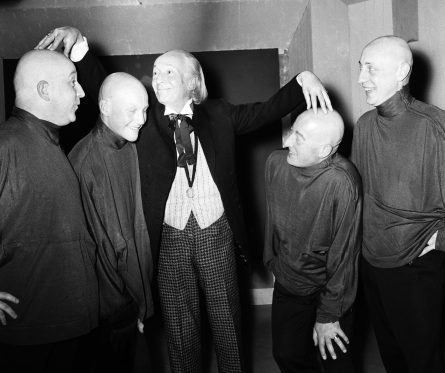 This is actually a behind-the-scenes photo from the filming of the first episode of The Daleks’ Master Plan, The Nightmare Begins.  The actors had minor roles playing functionaries at Central Communications on the Earth of the future, and were known as the “Technix”.  Four of the six of them are featured in the above photo.  Here they all are together: 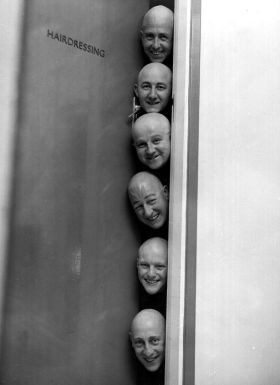 Let’s give them the namecheck they deserve for their moment in Doctor Who history.  In alphabetical order: Ashley Bowring, John Cam, Hugh Cecil, David Freed, Gary Peller and Dennis Tate.  These brave actors suffered for their art as well, because those aren’t bald caps, as the next photo demonstrates:

Yes, that’s one of them having his head shaved.  I’m not sure I would trust the guy on the right with a blade anywhere near my head.  If you’re proud of your head of hair, then Doctor Who has bad news for you: if you want to find gainful employment in the future, you will have to be hairless.  The future’s bald.  RP

Read next in the Junkyard… Unusual Doctor Who Photo #10: The Sucker Punch

Co-writer on junkyard.blog. Author of windowsintohistory.wordpress.com. Editor of frontiersmenhistorian.info
View all posts by Roger Pocock →
This entry was posted in Doctor Who, Random Chatter and tagged Photos, The Daleks' Master Plan. Bookmark the permalink.

1 Response to Unusual Doctor Who Photo #9: The Technix