Board Game Tour of Britain: Bournemouth

Square #9 Bournemouth. We have a mission: to follow the route of an old 1940s board game around Great Britain, sticking to the instructions as closely as we possibly can. Along the way we will look at the history of the places we visit, with a particular focus on how things have changed since the tour was created around 70 years ago. 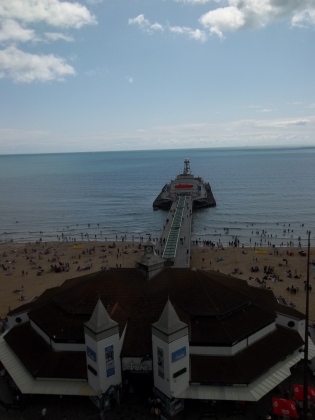 The game contained no special instructions for Bournemouth (other than to “miss a turn and take a sea trip around the Isle of Wight, which we will be doing as a separate holiday) so we enjoyed some beach trips and went to the obvious focal point: the pier. The structure as it appears today was built in the late 1870s and opened in 1880, although previous simpler structures existed on the site since 1856. The pier was extended in 1894 and 1909, and like many piers much of it was demolished during the Second World War as a precaution against invasion. It was then repaired and reopened in 1946, which brings us very close to the creation of the board game we are following. There have been considerable changes since then, with the theatre in particular post-dating the board game. In fact, the whole area looked considerably different to us than it would have done to a visitor in the late 1940s. We enjoyed a visit to a very good aquarium beside the pier, which opened in 1998, and also experienced an aerial view of the pier from the ferris wheel.

The next leg on the board game tour will be the Isle of Wight.