Board Game Tour of Britain: Salisbury

#8 Salisbury. We have a mission: to follow the route of an old 1940s board game around Great Britain, sticking to the instructions as closely as we possibly can. Along the way we will look at the history of the places we visit, with a particular focus on how things have changed since the tour was created around 70 years ago.

The eighth square on the board was Salisbury, and the instructions told us to “visit the Cathedral and from the spire admire the view of the river Avon and the old town”. This is one of the instructions I thought might be unfeasible nowadays, but it is actually possible to take a tour of the tower at the Cathedral, right up to the base of the spire. The cost is very reasonable (£12.50 per adult at time of writing), considering that it also includes entry into the Cathedral and to view the Magna Carta. There are two or three tours each day, but it is advisable to book online, as the numbers for each tour are limited. I had been suffering with some dizziness prior to my visit so thought it best to avoid the tower tour, but my wife was brave enough to give it a go, and her photographs accompany this article. The tour lasted about two hours, so is not for the weak of legs! 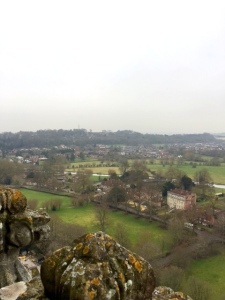 The Cathedral dates from the early 13th Century, and has the tallest spire in the country. It also contains the oldest working clock in the world, inside the Cathedral itself, which merrily ticks away without the benefit of a face.

The view from the spire is obviously quite different to the time of the game’s creation, circa 1948, with the city itself having grown through various developments and the absorption of a few former villages and estates into the cityscape. The population has grown since the 1940s from about 32,000 to about 45,000. The interior of the Cathedral also looks quite different to how it would have appeared to a visitor in 1948, with an impressive clear view right down the length of the Cathedral where previously a quire screen blocked the view. One of the windows, the “Prisoners of Conscience” is a 1980 addition. The Magna Carta on display is one of just four surviving copies of the original thirteen, entrusted at the time to the original Cathedral at Old Sarum (also worth a visit although not much remains of it).

The next leg on the board game tour will be Bournemouth.

Read next in the Junkyard: Board Game Tour of Britain: Bournemouth