Posted on February 17, 2022 by DrAcrossthePond

“The Speckled Band… it was the speckled band!”  The final words of Julia Stoner’s life are chillingly delivered.  This episode is considered one of the best and it’s also rumored to be Conan Doyle’s favorite.  It is a great story and for the episode, it’s easy to understand why.  Coincidentally, it’s also the one story I read while watching, so convinced was I that Brett lifted the character off the page, and to my amazement and delight, it really is a near word-for-word recreation with minor changes that helped the dialogue flow better in the televised format.  Across the board this is a magnificent, memorable story but let’s get into this classic to understand why.

When Helen Stoner comes to see Holmes, she’s terrified and desperate.  Forced to sleep in her dead sister’s room due to work being done in hers, she has started hearing a strange whistle at night.  She remembers that, before her death, Julie also claimed to have heard one.  Convinced she’s not long for this world, Helen turns to the one man who can help her.  After telling Sherlock the facts, she leaves but her stepfather, Dr. Grimsby Roylott, bursts into 221B and warns Sherlock to stay out of his business.

When Helen’s mother died, she left a sizable amount of money to the family that would be paid out to the two daughters as they married.  Julia is dead at the start of the episode, having been killed before she left to get married.  Helen is engaged and will be leaving soon.  Knowing the impact this will have on his income, Roylott has a diabolical plan.  He has gypsies living on his land who are in possession of a number of wild animals but the most lethal is a swamp adder.  Using the swamp adder, he sends it through a vent connecting his room to his daughter’s.  The snake slithers down the bell pull and into the victims bed, knowing sooner or later, it will strike.  Then, with the use of a whistle, he summons the snake back to his room where he locks it in a safe.  Julia’s cry of “the speckled band” is a reference to the only thing she could see in the darkened room.

Greed.  Roylott wants the money and doesn’t love his stepdaughters enough to protect them.  If any credit is to be given to him, Helen tells Holmes that after her mother died, a change came over him.  Perhaps he was not always so vile, but now he’s about as brutal a man as one could encounter.

“Violence does, in truth, recoil upon the violent, and the schemer falls into the pit which he digs for another.”  Sherlock summarizes it perfectly; Dr. Roylott gets what he deserves when Holmes strikes the snake with a stick.  It races back up the bell pull and attacks the first thing it finds: Grimsby Roylott himself.  (A note about the televised adventure: the sequence is limited during the episode, but the end credits show the entire scene of Holmes striking the snake; it’s worth staying for this “after credit” scene!) 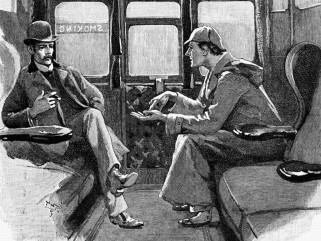 The original artwork, albeit for a different story… 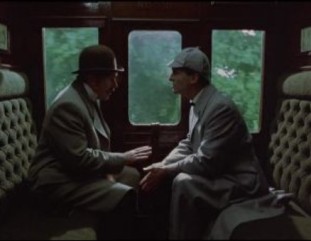 is recreated perfectly in this classic story.

This episode is a veritable cornucopia of classic Sherlock moments.  The deerstalker cap, the scene on the train, even the bent fire poker are all iconic.  The quotes abound: “I’ve heard of you before!  You’re Holmes the meddler, Holmes the busybody, Holmes the Scotland Yard Jack-in-Office.”  Holmes tells Watson that “it’s a wicked world, and when a clever man turns his brains to crime it is the worst of all.” Later, speculating about Dr. Roylott, another similar declaration is made: “When a doctor does go wrong he is the first of criminals.  He has nerve and he has knowledge.”

Watson also has to be given some credit here.  He talks of his military service in the 5th Northumberland Fusiliers.  And David Burke needs to get credit as well for being a delightfully human Watson.  Having been woken by Holmes, he has yet to eat and even with Helen Stoner’s extraordinary tale, he is determined to get that opportunity.  “I’d say it was time for some breakfast!”  Though she declines and tries to leave, Watson is ever-persistent, “You’ll stay for some breakfast, surely!”  Later, when Holmes is planning an overnight vigil to watch the home of Roylott and Stoner, Watson yet again pushes for food, “We shall have dined, surely!”  Yet it’s not all about food for this Watson.  Upon arriving at Stoke Moran, Roylott’s ancestral home, Holmes turns to find Watson on his knees in the dirt.  When asked what he’s doing, Watson says “applying your methods” and while he finds only his own footsteps, it does show the respect he has for Holmes.

Lastly, of the duo, during their vigil, Watson confesses that he knows Sherlock saw more than he did.  This offers another of Brett’s stunning performances as he kindly admits that he did not see more, but perhaps inferred more.  He then apologizes for asking Watson along as there is a distinct element of  danger to what they are doing.  Watson simply says, “If I could be of assistance…”  The bond between these two men is magnificent and thoroughly enjoyable to watch.

If the length of this article does not give you a clue, I think this is a masterpiece.  Brett brings Sherlock quite literally off the page, as I discovered while reading/watching simultaneously.  Whether flashing that quick smile, or making his eyes gleam with excitement, Brett breathes life into the character in ways I’ve never seen improved upon.  And Watson is wonderful as well.  But a hero is often defined by the quality of the villain and special appreciation has to go to the villain of this piece, Dr. Grimsby Roylott played by Jeremy Kemp.  His crazy-eyed, red-faced mania is perfectly portrayed, but when he bursts into 221B and bends a fireplace poker in half, we realize just what a dangerous man this is.  He is the first truly formidable foe we’ve seen in the series.  This is a must-watch episode of the first season.  I suspect there will be others.  ML