The Seeds of Death

The base-under-seige format of many of the Troughton stories has been mentioned many times, but why was it used so many times and why did it work so well?  I think it comes down to showing the audience one scary thing that generates that tingle of fear in the viewer: the moment the monsters finally get into the “base” and the characters are stuck inside with the monsters.  Stories build up to that moment over the course of multiple episodes, and then we get to see the regulars and/or guest characters struggling to survive in a confined space with nowhere to run.  This works best if there really is nowhere to escape to, such as a space craft or space station, an Arctic base or, as in The Seeds of Death, a moon base.  In other words, the exterior environment has to be just as deadly as the monsters in the interior.

Again and again the Troughton era gives us these moments and eventually it becomes a pick and mix:

But when the format works so well, and guarantees that edge-of-the-seat moment of seeing a character run down a corridor, knowing that the monster can take his time because ultimately there is nowhere to escape to, then why wouldn’t you keep doing it?  The re-use of the theme of foam as a threat is a little less of an obvious choice, but at least it allows for that glorious moment where Wendy Padbury simply cannot keep a straight face as Troughton bursts through the weather station door covered in foam… which might just be my favourite ever Doctor Who moment.  There is an extra on the DVD with an in-vision commentary at that point.

Like a lot of Doctor Who sequels, The Seeds of Death has similar themes to its predecessor, especially the danger of over-reliance on technology.  This is still relevant today (e.g. the recent cyber attack that created problems with the NHS in the UK).  If you rely solely on one type of tech, what happens if you lose it for some reason?  You might assume that T-Mat is a rip-off concept, with Star Trek introducing its own “beam me up” three years earlier, but you would be wrong.  Star Trek didn’t debut in the UK until a few months after The Seeds of Death, and in any case the idea goes right back to the 19th Century in fiction.

Sequels often struggle to capture the magic of the original, but Doctor Who bucks this trend time and time again with returning monster stories.  Bringing back the Ice Warriors but putting them in the confined spaces of a moon base and a weather station makes much more effective use of the huge, powerful-looking monsters, and we also get to see them invading Earth, in some atmospheric location shots.  We see the beginnings of the race becoming more complex, with the introduction of the Ice Warrior class system, that would allow for greater subtlety of motivations in their next story.

After virtually a whole series of base-under-seige (Season Five), this series was moving away from that with some greater variation of story ideas, but we are firmly back in Season Five territory here and the result is one of the highlights of the year.  It would just have been nice if the Doctor was a bit more Doctorish in his approach to the two big questions he has to face in this story:

(1) Why do the Ice Warriors want to control the weather?
(2) What can we use to destroy the seeds?

…and answered those by joining the dots rather than by luck.  But none of this really matters, when we have that magnificent sight of Wendy Padbury’s reaction to her foamy co-star.   RP

Let’s have a look at a magnificent tribute to the Second Doctor from Babelcolour, and then scroll down for another review “from across the pond”!

I remember how happy I was when this episode started.  My mom and dad were out that Saturday night.  I might have been 13 at best when I watched this one.  At the time, I had not seen the earlier Ice Warrior stories but had seen the Peladon ones.  Early in this episode there is a blast from a gun that we see happen without them showing the villain.  (Unlike many titles, The Seeds of Death offered little in hints as to the villain of the piece!)  Observing the way the weapon blasted, I said to the empty room: “looks like an Ice Warrior blast!”  When I was proven right, there’s a chance I jumped around a lot feeling particularly giddy…

I have a special fondness for this episode.  It was the first Ice Warrior story that existed intact. Their class system is more evident giving us more to understand about their race and the base-under-siege story is as good as ever.  Roger’s description of that is perfect.  It’s the same thing that made Alien so utterly horrifying; being trapped inside with the enemy!  The cast is back to my preferred trio of the Doctor, Jamie and Zoe.  The monsters are a personal favorite (… and I know the way their guns fire)!

And let me take a moment to jump back and justify one thing about Zoe Vs. Victoria.  They are both great companions and the sweetness of Victoria is wonderful.  It’s impossible not to like Victoria!  Her interactions with the Tardis crew are often brilliant.  But she screams far too much and always sounds like she’s on the brink of tears during adventures whereas Zoe is intelligent and tries to rationalize things.  But if I had to rate them, they would be up there with the best companions of the whole series.  (Maybe I’ll make a list one day…)

But as much fun as I had watching this story, it could have been reduced as it is a LONG 6 episodes.  It would have benefitted from some editing and 4 or 5 episodes would have produced a better story without having entire blocks of time dedicated to Patrick Troughton running down mirror-lined corridors.  (And what kind of base is this that has mirror-lined corridors anyway?  A training camp for clowns?)  What does help is that the cast is clearly having fun with the episode.  And there’s one of my favorite lines in the entire series: “Your leader will be angry if you kill me!  I’m a genius!”  (This is only made better when the two Ice Warriors look at one another and whisper-speak “GENIUS!” like it’s some incredible revelation!).  And I have to say the black and white era of Doctor Who was amazing.  There was something epic about it.  Again, I’m reminded of watching old horror movies with my dad.  It strikes a chord.  There’s a wall of light that the cast finds themselves up against that creates near-silhouettes of them.  When they are up against the Ice Warriors, there’s a feeling of tension created. 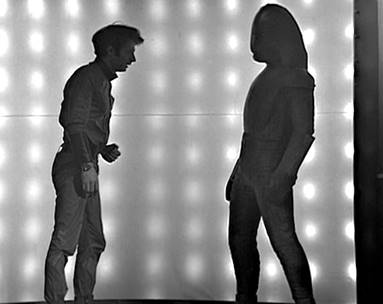 For me, Doctor Who is always fun and I do like this episode a lot.  It may not be the best Doctor Who has to offer, but it’s far from the worst.

Now I have to wonder if the Ice Warriors are in my home, because it’s freezing here this morning and it’s only Ssssssseptember 1st.  I’d put the heat up, but don’t want to hear that familiar hisssssssssssssss….   ML

Read next in the Junkyard… The Space Pirates