It’s November 23rd. Let’s face it, if you’re on this site, we all have something to be grateful for today. Today marks the 54th birthday of Doctor Who.

On the personal front, I have a lot for which to be thankful. I’m very lucky; I have an amazing mom and dad, an awesome baby sister and many marvelous “half-siblings” or “pseudo-siblings”, whatever you want to call those friends that have been so instrumental in my life that they have become brothers and sisters to me. Not only that, but I have the best in-laws (siblings and parents) anyone could ask for, but my wife and kids…! They’ve always been amazing, but sometimes even the best can rise to heights hitherto unknown!

I’m rambling; I realize that you come to this website to read about Doctor Who. But it is Thanksgiving! So I’ll merge the two… because, you know, why not?

My wife is not typically good at keeping surprises. Generally, she lets the cat out of the bag when she’s excited about a gift she buys someone. And if she doesn’t, one of the kids will. Yet for my 45th birthday, when she said that what she ordered would arrive after we went on holiday to see her family, she was keeping a secret. I had no reason to doubt her, knowing she can’t keep her excitement contained! And the kids too, especially the younger one… someone would have talked!

Imagine my surprise when she and the kids handed me a bag which appeared to contain only a few pieces of paper! When I looked at those pieces of paper, I nearly passed out… 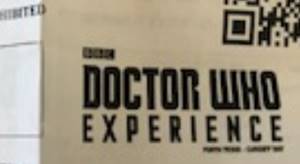 Now, as if the secrecy wasn’t enough, the gift was utterly mind shattering (wherein I lost the ability to say words). Best part is, they weren’t done with the surprises.

I reached out to Roger to see if finally, after all these years, we’d be able to meet but, alas, he said he had plans that weekend. Flash forward to the event…

We arrived outside the massive hanger-sized Doctor Who Experience. Such was my excitement, I accept that it is within the realm of possibility that I was dragging my poor wife. I spotted a little kid in the path and thought “gee, he looks like Roger’s son!” Well, the kid didn’t just look like Roger’s son, it was Roger’s son. And I realized my wife and kids pulled off not one, but TWO epic surprises. They had arranged all of this!

Of the Doctor Who Experience…

Upon walking into the voluminous complex, we were greeted by handprints of many of the actors from Doctor Who history. There were Daleks off to the side including a huge, red Lego Dalek. (Many of these images I’ve already posted.) We were then brought into a small waiting area where more items were on display, before being asked to power off our phones as they would interfere with the equipment. And here’s where it gets genuinely great.

We walked into a room with Rassilon’s staff on the wall, a giant table with The Book of the Time War on display, and a giant view screen which happened to have a vertical crack in it. (When I noticed the crack, I thought it was sad… but since they were closing down in a month, it was probably not worth fixing! Little did I know!)

Romana’s voice suddenly kicks in, talking about Gallifrey and the Doctor. On that screen, an image forms. Then we appear to communicate with Peter Capaldi in the TARDIS. There is an attack taking place by some giant space squids called the Crinis. With the help of the Gallifreyan tour guide, the screen splits open and we are connected to the TARDIS. We step though into the Architectural Configuration room seen in Journey to the Center of the TARDIS. (At this point, the 8 year old kid living inside my soul is doing cartwheels). With a little sleight of hand and while we are distracted by Capaldi telling us what we will do next, the TARDIS appears behind us and we step through into the Tennant console room. There are a handful of control pads and we have to “fly” the TARDIS. (I had one of them but gave it up to an actual little kid. The little kid in me cried in the corner, but the adult exterior put on a brave face!) The room moved, the floor jostled… our tour guide even fell. Whether he did that as part of the act or actually fell because his robes were long and snagged the moving floor, I have no idea, but it was utterly engrossing. And with that, we arrived on the Skaro of Asylum of the Daleks. We are told we have to find 3 crystals. The Gallifreyan-tour guide selects kids from the audience to locate these crystals. (Nothing I could do: I just can’t pass for small enough, but my wife and I did get to stand on a “pressure plate” to open the doors to escape!) A child goes up and removes the crystal from a Dalek which brings them all to life. We had to escape in a hurry! From Skaro to a graveyard teeming with Weeping Angels to the Totter’s Lane Junkyard we travel in search of these crystals. Upon saving the day, we don 3-D glasses to watch the Doctor send the Crinis back into their own dimension. We then step through the TARDIS into the portion of the hanger that is a museum where we were able to take more pictures than I’ve ever taken in my entire life. (I’ll release more of them as we continue our Junkyard journey!)

The first thing that greets us upon exiting “The Experience” portion of our journey.

There’s no amount of typing that can do the Doctor Who Experience the justice it deserves. Those responsible for it did an incredible job putting something together that was unique. Attention to detail alone warrants going should they resurrect this amazing experience. Nostalgia over many of the classic series’ props is another good reason to go. I could have spent the whole day there. We lingered as long as we could in their café, even giving our youngest traveler an opportunity to eat a chocolate TARDIS. It was called The Doctor Who Experience because it was exactly that: an experience that will never be forgotten. I can’t imagine ever receiving a gift to rival this one! (And Cardiff was fun too; it was nice being at the Torchwood Tower and Ianto’s shrine, but I’ll talk about that during a Torchwood review one day.)

And I have my wife to thank for it!  I’ve always said she has a knack for finding just the right gift… well, I was never more right than in this moment.

And like the TARDIS, she bridged a gap in time and space to bring two “brothers” together after 11 years of friendship!

From deep within the darkest corners of the Junkyard, I wish you all a very happy Thanksgiving!

And happy 54th Birthday to Doctor Who.   ML

Author of windowsintohistory.wordpress.com Co-writer on junkyard.blog Editor of frontiersmenhistorian.info
View all posts by Roger Pocock →
This entry was posted in Doctor Who, Entertainment, Exhibitions, Random Chatter, Science Fiction and tagged The Doctor Who Experience. Bookmark the permalink.