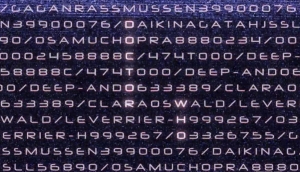 I thought I heard a voice cry, “Sleep no more! Macbeth is murdering sleep.” Innocent sleep. Sleep that soothes away all our worries. Sleep that puts each day to rest. Sleep that relieves the weary laborer and heals hurt minds. Sleep, the main course in life’s feast, and the most nourishing.

Earlier this series we had an outrageous fourth wall break in Before the Flood, with the Doctor talking directly to the camera about a paradox.  That works very well to prepare us for what happens here.  Whether it’s deliberate or not I don’t know, but it does seem to indicate a move towards a more sophisticated form of non-immersive storytelling, and that has been a theme of the Steven Moffat era: pushing the boundaries of how television tells stories.

Before we jump to the ending to discuss this further, and at risk of stating the obvious, this is a found footage episode.  Remarkably Doctor Who has never got round to doing this before, but it does come with a few problems that had to be solved in order to make it work as a Doctor Who episode.  The main one of those is a problem of realism that found footage has.  It is always based on selling the viewers a lie: this is real.  It pretends to be something that happened in real life and just happened to be captured on film, rather than the work of writers, directors, producers etc.  Now it’s obvious immediately that this isn’t going to really work with Doctor Who on those terms.  This is not Paranormal Activity, or The Blair Witch Project or Grave Encounters.  This is Doctor Who and it already has 50 years of history, so we are never going to be sold on the idea that one particular episode is found footage.  So instead Mark Gatiss has a lot of fun with the idea by playing with the core idea of found footage and the one big hurdle it has to jump: convincing the viewers.  The thing with found footage is that it tends to be contrived, even in the best of examples.  Paranormal Activity, which is probably our go-to example of the genre, calls on the viewers to believe that one of the characters is obsessed with filming everything, including moments that are clearly emotional and personal.  That’s where the locked off footage provides the far superior moments in the film.  So Sleep No More takes the central problem that all the major plot beats have to be captured on film by luck, and makes the explanation of that the keystone of the whole plot.  It’s delightfully clever.

It is also incredibly brave.  The last time the BBC really attempted anything like this was Ghostwatch, and although, like Sleep No More, it was clearly flagged up as being a work of fiction, the idea of spreading evil into the homes of viewers was enough to create major problems for the BBC and make the whole thing unrepeatable.  It just goes to show how we consume television in a more sophisticated manner and are much more savvy concerning the techniques of the genre that the time is right for the BBC to greenlight something of this nature again.  It does help that the fourth wall breaking is signposted earlier in the episode in a more tongue-in-cheek way (Clara asks the Doctor when he sleeps and he says “when you’re not looking” – at that point the POV is Clara, so he is looking right down the camera lens, also answering a long-standing fan debate in the process).  So that paves the way for the fourth wall break to take a sinister turn at the end.

Gatiss also borrows from other horror movies.  The idea of viewers showing “this film to your family” is slightly at odds with what is happening at that moment, with Rassmussen addressing his remarks via a BBC broadcast to millions of people.  It sounds like something written by a writer who has been influenced by The Ring a bit too much.  We don’t really “show films to our families” much any more.  We might recommend things, or “share” them, but Rassmussen’s words feel like they belong to the days of lending VHS tapes.  This feels slightly displaced in time, like something Doctor Who should have got around to sooner, but perhaps the ghost of Ghostwatch prevented that.  And Gatiss basically does tend to write Doctor Who as if he is writing for the Classic series, far more than any other writer.  Where he is less successful is with the characterisation.  The guest characters are all forgettable, and are really only there to run around and get killed, but maybe when Doctor Who really goes big with the horror that’s all we need.  By a considerable margin, this is Gatiss’s best work, and deserved recognition as one of Doctor Who’s greatest scary masterpieces, in the same class as Blink and Midnight.  It may not have that reputation at the moment, but I think this is an episode that will stick in the minds of younger viewers, when the rest of this series has been forgotten.

We seem to have a theme developing this series of people dying and then not being quite as dead as we would expect.  We saw the Doctor’s ghost in Under the Lake, and then the Doctor had to “reverse engineer the narrative” in Before the Flood.  Ashildr got resurrected in The Girl Who Died, Sam Swift got the same treatment in The Woman Who Lived, and then Osgood came back from the dead in The Zygon Invasion as her Zygon duplicate (or the duplicate got killed – it’s unclear).  Now we have Sleep-Dust-Zombie Rassmussen narrating this episode.

It really all started with The Blair Witch Project in 1999; a movie that documented the events of a group of people in Maryland intent on uncovering some urban legend about a local witch.  Conceptually, it was a novel approach to telling a horror story.  Paranormal Activity piggybacked on the idea a few years later as did others like The Taking of Deborah Logan, Quarantine (which made me feel like I needed a shower after watching it) and then for a science fiction twist, Cloverfield.   The idea is that the camera tells the whole story.  It also assumes that through a totally horrific situation, a person would have the wherewithal to be recording everything rather than, you know, running for their lives.  Cloverfield was reminiscent of the real life events of 9/11; an event for which I’ve documented before, and having been there, and I can tell you, if I were running with a camera, it would not be recording while I was trying to get away.

It would come as no surprise that Doctor Who, that ever-experimental show that it is, would have a go at this style of storytelling.  And for ambition, we have to give the story top marks.  To address the audience and break the fourth wall, the people he encounters have helmet cams allowing the Doctor to talk to the audience without actually talking to the audience.  And like its predecessors in film, this story goes heavy on the horror including the body horror in the form of the sleep creatures, named Sandmen by Clara, and later, watching Rassmussen rub his eye out of existence.  It’s also frightening in that the Doctor does not win; he gets mislead and misjudges what the “big bad” of the story wants to do and loses as a result, with the potential for some serious fallout somewhere in the future.   And there’s also something wonderfully disturbing to having such horrific images paired with a classic piece of music like Mr. Sandman considering how upbeat that song is.  It’s incongruous in a delightfully morbid way.

So we’ve established that ambition gets high marks, and story gets at least a fair score due to the horror elements captured in the found footage format but character does not fare well.  First of all, the casual nature of the Doctor and Clara’s dialog feels too forced and is too reminiscent of a far better double-act with two equals bantering, but Clara is not the Doctor’s equal.  She wants to think she is, but she simply is not.  And the mere fact that she has a key to the TARDIS again is grossly hard to stomach considering what she did with the keys just a season earlier (namely throwing them into lava to destroy them because she thinks she’s the most important woman in the universe).  There’s also 474, the “grunt” who ends up being treated like a subhuman because grunts are grown and speak a form of pseudo-English. She lays down her life for the guy she had a crush on, thus proving her humanity in the end, which just proves over and over again that humans don’t really deserve saving, so it’s really good of the Doctor that he does it anyway.  Was 474’s entire character necessary?  I’d say not.  (I swear, it’s no wonder people think AI will rise up and wipe us out: we can’t treat anything well, including a grunt who looks like us.  I think the AI will start watching our shows and be horrified… or the AI equivalent!  We better start making shows that depict us as a bit more understanding and accepting than we actually are or the future is going to be lived in the Matrix after all … the one of Neo, not Gallifrey!) 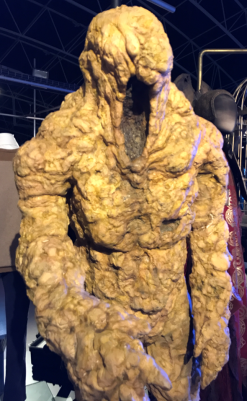 Reese Shearsmith is actually quite good as Rassmussen wearing his Babylon 5 uniform and rubbing his eye to dust; he made a good villain.  The Sandmen are disturbing not just in appearance but in concept; eye gook, turned sentient… horrifying!  The episode does attempt to give us some comedy but again we tread a fine line.  Comments like the naming of things as the Silurians “all over again” are funny but seem to try to put Clara on the same level as the Doctor.  I do love the Doctor’s confusion when asked “what happened” leading him to an attempted discussing of the entirety of human history but this walks a different fine line since we don’t know if the Doctor is just being sarcastic or if he actually doesn’t know what English is.  (I lean toward the former!)   The tension in the episode hits some all-time high notes though but I’m not sure the episode is that good regardless.  I think the fourth wall typically should not be broken (unless it’s Deadpool doing it, because he’s crazy and very funny!)

If you’re like me and don’t like breaking the fourth wall, this story may not be a highlight of the season, but you still do have to acknowledge that Doctor Who is ambitious and always willing to try something new and unusual and for that, it deserves recognition and appreciation.  I just hope that by watching it, we’re not spreading that Morpheus situation because there will be more of these things wandering about soon enough… (*courtesy of the Doctor Who experience in Cardiff!)   ML

Read next in the Junkyard… Face the Raven

1 Response to Sleep No More