On Target: The Day of the Doctor

Posted on December 23, 2018 by DrAcrossthePond

Well, it’s time to wrap up the last of the TARGET novels, this time looking at the incredible The Day of the Doctor.  As I mentioned last week, I had to get the audio since I lost my notes on the book and it’s been months since I read it, but it was worth it.  Nick Briggs reads the audio and does genuinely stunning renditions of David Tennant and John Hurt.  His Matt Smith isn’t bad, but his John Hurt is just perfect. 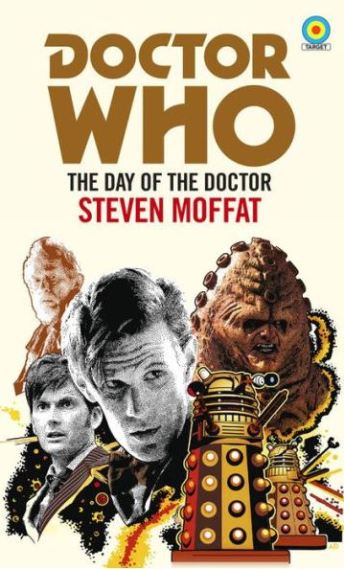 The book itself is actually longer than the others and has the smallest font imaginable.  I would have preferred they double the size of the physical book so I wouldn’t need glasses when I was done reading it.  The book takes more than a few liberties and I can’t say I liked all of them.  I refer back to my previous reviews because other authors add things to the story, but few can do it quite like Moffat.  He removes some scenes, like the scene in Coal Hill where Clara receives the call from the Doctor and replaces it with the Doctor calling the school and speaking to the headmaster who knows the Doctor is an alien because Ian and Barbara had told him so.  Why do that?  It’s funny, yes, but different from the episode and seems almost too much of a comic scene.  Now, in some cases his additions work well.  There’s an interesting feature to a robot clown for instance.  I was happy to have a little added dimension to the character of Atkins, but in the building of that character, he lost credibility.  Atkins is the security guard who thinks it’s his first day working for Unit.  In the episode, he’s there for a quick laugh and we forget about him.  In the book, Moffat goes on about this man who keeps thinking it’s his first day on the job, but it breaks the reality of the character.  Does he go home and tell his wife every day that he started a new job?  It should have been left alone; less is more sometimes.  On the other hand, there are many scenes with Brigadier Lethbridge-Stewart and they are marvelous.  There’s backstory to the Doctor counting the children on Gallifrey.  It offers an interesting reason why he can’t remember that number by Smith’s incarnation.  There is a scene with the War Doctor collecting the Moment, and it is so perfectly him!  And Moffat has an flair for comedy so having the Doctor and River in a bath together is brilliant when the reader gets the full picture!   Moffat even gets the Peter Cushing movies to come up and creates a way for them to become canon.  So, he does do some great additions, don’t get me wrong!

Sadly, there are also things that irritate me immensely!  Moffat forces the “hey, remember we’re LGBT friendly” vibe again by having Clara mention that Queen Elizabeth was a phenomenal kisser, because I think Moffat wanted to see Clara kissing all these women.  It’s like a go-to line for him, having her mention all these “phenomenal kissers”.  Look, I do not deny that Jenna Coleman is outstandingly pretty, but come on, have some sense of the show you’re writing for; leave the fantasies for your diary!  Then there’s the realization that Ohila actually gave the 8th Doctor a chalice filled with lemonade and dry ice which just serves to make me want to punch him through the book.  I get it: the “war Doctor” was a part of the Doctor all along, but that’s just taking away from the importance of the scene and for what reason?  He has Matt Smith’s Doctor referring to a Zygon as a squid.  How many times have I mentioned that the Doctor should see past physical issues?!?  Does Moffat still miss this point?  Possibly, because he also got confused by thinking it was an episode of Sherlock; he has the Doctor talking to people who are not there, and has the War Doctor pilfer one of Holmes’ lines.  (Well, paraphrase it replacing being followed with theft, but the point still stands!)

But complaints about Moffat losing his mind cannot deny the genius of this story or this book. The book begins with a “lecturer” discussing “The Doctor Papers” as if the reader is a student and Stephen Moffat has some fun with that voice throughout the book.  Considering what we learn about “authorship”, ths works remarkably well.  There are some brilliant uses of that authorship, and many chapters are written where we have to figure out who is speaking, adding a sense of puzzle-solving to the reading experience.  If Moffat has one superpower, it’s telling timey-wimey stories and he does that well.  At one point, he gives us three perspectives on the way to the tower.  In other words, we hear the Doctor’s point of view as the War Doctor, then as Tennant, and eventually as Smith.  He tells it in a way that is almost eerie, because it really drives home The point that this is the same man, three times over.  It is genuinely a fascinating element of the book!  (Sadly, this does create a problem of its own if one thinks back to The Name of the Doctor, but it’s an issue that, like Gallifrey, can stand!)  He also finds a way to explain why the first two eras of Doctor Who were in black and white, and it really is marvelous.

Overall most of the story holds true to the episode but the ending is drastically different.  Yes, all the Doctors are there but Moffat wanted more to happen on Gallifrey and the book allows for it.  The final moments of the book are fascinating as a result of that liberty.  There are references to other adventures, along with titles, which felt strange, but considering the format of a lecturer speaking to students, it still worked.   The lecturer deserves an entire writeup, but that’s an element that really differentiates the book from the episode, so I won’t spoil that here.

The one thing I will say is that there seemed to be a nasty element to the book.  See, the book’s chapters are out of order numerically.  Realistically, this doesn’t matter, but for instance, it starts with chapter 8 covering the elements of The Night of the Doctor.  As the book progresses, they start mentioning chapter 9: The Truth of the Doctor.  Well, while the book explains why no one remembers reading chapter 9, as a real person outside the fiction of the book, one notices the absence of a chapter 9.  I could not help but take this as an intentional slight against Christopher Eccleston, the 9th Doctor, who would not take part in the episode.  So it felt like a jibe and I don’t want to be part of internal squabbling.  Should Chris have been a part of the story?  Absolutely, and maybe one day he’ll realize that his absence did hurt the fans, but that’s not for some hidden agenda with the book.

The last page of the book is weird.  Hearing Nick Briggs read it was mind-blowing.  I came away from the book quite happy, despite the complaints I made above, but did feel it was altered in ways that were not necessary.  Still, when you’re driving along with a great big smile going from ear to ear because the story makes you happy and the reader is just utterly engrossing, I can’t say it was a bad book or audio.  And this book did make me smile.  A lot!  I loved reading it and I loved listening to it.  I just wish Moffat retained his awesomeness throughout his run, rather than having these bursts of, I don’t know what to call it, spontaneous additions?  He had a near-flawless episode and created a book that is fantastic on so many levels but loses some of the flawlessness by adding too much.

All five new Target books were utterly fantastic and I do recommend each of them.  This one I would really love to hear more feedback on after you’ve read it.  Hopefully, we can have an interesting debate around it later!  (Or earlier.  I do timey-wimey too!)  ML

Like Loading...
This entry was posted in Books, Doctor Who, Entertainment, Random Chatter, Science Fiction. Bookmark the permalink.

4 Responses to On Target: The Day of the Doctor