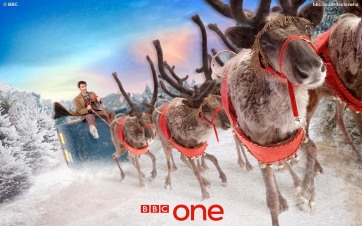 Once upon a time there was a magical time machine that travelled through space.  It was disguised as an ordinary Earth object, and it was bigger on the inside than the outside.  It could travel great distances in the blink of an eye.  It’s owner had a flamboyant taste in clothes.

It was called “Santa’s sleigh”.

Oh, you were expecting something else?  When you think about it, the TARDIS and the sleigh are quite similar ideas.  Both of them are bigger on the inside (how else would all those presents fit in the sleigh?).  Both of them must be able to travel at incredible speeds.  What Santa Claus achieves in one night would be impossible without (a) travelling incredibly fast and (b) presumably some kind of time travel, because otherwise it would be impossible to get round all those millions of houses, however fast he moves.  It looks like a sleigh, but there’s clearly more to it than that ordinary Earth object, just like the TARDIS.

This similarity between TARDIS and sleigh was made explicit in the 2009 BBC Christmas ident.  Remember that?

Isn’t that a thing of beauty.  And then in 2014 the Doctor finally got to ride in Santa’s sleigh, in Last Christmas.  Something we always suspected gets confirmed in that episode:

DOCTOR: How do you get all the presents in the sleigh?
SANTA: It’s bigger on the inside.

And also the similarity between the Doctor and Santa Claus is recognised by Clara:

DOCTOR: Just focus on this. Do you believe in Santa Claus?
CLARA: I’ve always believed in Santa Claus. But he looks a little different to me.

Earlier this month we looked at the Doctor’s first ever sleigh experience, when Santa sent his reindeers to collect the Doctor in A Christmas Story, a comic strip adventure starring the First Doctor and his grandchildren, John and Gillian.  Another sleigh encounter for the Doctor can be found in the Tenth Doctor book Autonomy, although this time Santa is not the owner of the sleigh.  Instead it is owned by an animatronic Snow Queen:

It was a sleigh.  It was wooden, whiter than snow, with gleaming silver runners.  It was led by four beautiful reindeer with shining pelts and firm, glossy antlers, and driven by a small, bearded man in a pointy hat.  Reclining in the luxurious seat of the sleigh was a beautiful, raven-haired woman, with ice-white skin beneath an elaborate crown, dressed in silver furs and expensive-looking leather gloves.

There’s more than a touch of The Lion, the Witch and the Wardrobe about that, isn’t there.  And it’s quite deliberate, actually.

‘And whatever you do,’ said the Doctor, ‘don’t eat the Turkish Delight.’

The Eleventh Doctor also has some fun with a sleigh, in A Christmas Carol, but it is a shark that pulls it through the sky rather than the reindeer.

And that’s about it for the Doctor’s encounters with sleighs, unless you count William Sleigh, who played Galloway in Resurrection of the Daleks.  But those brief encounters stretch right back to 1965, and we probably haven’t yet seen the Doctor’s last sleigh ride.  In fact, there would be nothing to stop him tinkering with the chameleon circuit and making the TARDIS look like a sleigh, packing it full of gifts, and dressing up in a jolly red costume in one of his future incarnations.  Perhaps he will be a little more rotund by then, and will have a penchant for facial hair.  Maybe, just maybe.

Enjoy your Christmas Eve, and keep an eye out for Santa and his sleigh tonight.  I hope he brings you everything you ever dreamt of, and more.   RP

Author of windowsintohistory.wordpress.com Co-writer on junkyard.blog Editor of frontiersmenhistorian.info
View all posts by Roger Pocock →
This entry was posted in Christmas, Doctor Who, Entertainment, Random Chatter and tagged Autonomy, Santa Claus, Sleigh. Bookmark the permalink.