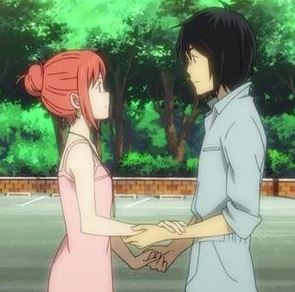 We pick up where the last film left off, with Akira and Saki on the plane back to Japan. As per the previous film, you won’t have a clue what’s going on if you haven’t watched what came before. This doesn’t stand alone. I’m fine with that, but would have liked a stronger conclusion to the series, paying off the plot threads that were created in the television series. Instead, we detour into some very different territory, with an emphasis on Akira’s past and who his parents are. It’s good stuff, but Akira is the sort of character who takes everything in his stride, so it lacks the emotional kick that a journey of self discovery would normally have. He even seems quite matter-of-fact about finding the mother who abandoned him as a child, sending him off to buy an ice cream and then doing a runner.

At the eleventh hour we are still introducing new characters rather than wrapping things up satisfactorily, but the one new character who is essential to the story and works well is Mr Outside, the man who started off the whole chain of events. I loved the revelation about how he chose his candidates to change the world. At first I thought he was altogether far too benevolent for a criminal mastermind, but the writer wisely showed an edge to his character when he easily deals with an attack from somebody who is a fraction of his age.

Most of the main characters are given a good slice of the action again, and I particularly enjoyed Kasuga and Pantsu’s escape from the police, which was probably the most exciting moment of the film. And I suppose that really sums up the lack of excitement in the film as a whole. Things don’t so much reach a grand finale as fizzle out. The main characters are still kept apart for nearly the whole film, which is particularly frustrating in the case of Akira and Saki, whose slow-burn romance I was enjoying watching. They do at least get a big kiss, but I could have done without yet another resetting of the status quo, with Akira once again deciding to leave Saki behind and disappear. How long is that poor girl supposed to wait for him? The character development through the series has been almost zero, but with a couple of notable exceptions: Pantsu has gone from being a hopeless lock-in to an important member of the team, but that had already happened before this film started. More important is the journey Satoshi takes. It’s not a particularly happy journey but it’s one you have to admire, because he has been the loser in love right from the start of the series. Saki obviously means the world to him and is never going to reciprocate his feelings, and he has had to watch her falling in love with Akira, and yet he has remained a loyal friend throughout. There’s one key moment where Saki is about to give up on Akira, and Satoshi gives her a pep talk, which shows that he is putting her happiness first, even though Saki and Akira’s relationship is hurting him deeply.

Ultimately, though, the minimum we might have expected from this film was to conclude the major plot threads, and it doesn’t. We never learn who the Supporter was (unless I missed it – I must admit I got quite confused). And remember the game they were all supposed to be playing, with only one possible winner and everyone else supposed to die? Yeah, that doesn’t really happen. Instead, Mr Outside calmly announces that there is one obvious winner… and then calls it a draw. It’s like walking away from a chessboard halfway through the game. This doesn’t conclude, it just… stops.

Eden of the East was a fabulous television series, but the films have been such a disappointment. They are still entertaining, but never come remotely close to hitting the standard of the series, and all the excitement and tension established by Mr Outside’s fascinating game is steadily abandoned over the course of the two films. There’s something very frustrating about a weak conclusion to a good series. You wait for the big finale, and then instead of a strong ending you get…   RP

Co-writer on junkyard.blog. Author of windowsintohistory.wordpress.com. Editor of frontiersmenhistorian.info
View all posts by Roger Pocock →
This entry was posted in Anime, Entertainment, Movies, Reviews, Science Fiction and tagged Eden of the East, Paradise Lost. Bookmark the permalink.

3 Responses to Eden of the East: Paradise Lost (Review)