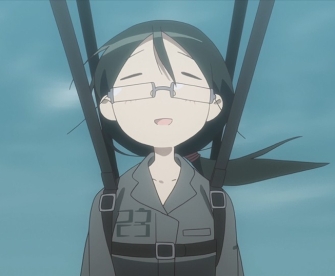 A plane flying behind Chi signals the arrival of only the second human being the girls have met in six episodes. Ishii is similar to Kanazawa in many ways, with a single-minded focus on her work. Amusingly she is so focused that she doesn’t even notice the girls until they have been standing right in front of her for a couple of minutes.

Ishii has a dream to leave the city in a plane and fly off to somewhere better. Yuu, who has been quick to embrace the hopelessness of life, is quick to point out the danger: there is a very real possibility that Ishii could die in the attempt to get a plane in the air, but as she points out Chi and Yuu are facing death anyway by staying in the city, just more slowly.

“True hopelessness is not having anywhere to go. You’ll just end up dying, along with this city.”

The importance of what Ishii is doing is underlined by the likelihood that she is the “last pilot in human history”. We build up to the big moment with some beautiful music, starting with the wonderful choral piece Hitomi ni Utsuru Keshiki, which often plays throughout the series. It’s an amazing piece of work, starting menacingly, then becoming hopeful and just a little bit melancholy. We build up to some euphoric music for the moment of the flight… and then the music cuts out and the wings come off the plane. Girls’ Last Tour never does the obvious thing, and never lets the viewer relax under that slice-of-life comfort blanket for long. But this is not a cruel series, and Ichii parachutes out with a smile on her face.

“Once you fail at something, you feel so carefree.”

I suppose I could complain about the series pulling the same trick twice with Kanazawa and Ichii, with both of them losing the very thing they have been living for, but it’s all wrapped up in such an important message that it doesn’t matter. Let’s break this down a bit, because it has something very interesting to say about the human condition.

So we work, and we have hobbies. What do we do those for? Well we work so we can earn money. That gives us a sense of purpose in life. In a post-apocalypse world that is no longer a thing. But what these humans can have in a post-apocalypse world are their hobbies. Kanazawa had his cartography, Ichii had her plane flight, Chi has her journal and Yuu… well, Yuu is different but we’ll come back to her.

But let’s stop and think about why we pursue our own hobbies? For a lot of people it is also about money. Some people dream of a hobby becoming a means to earn money. For others it is about recognition, becoming famous via their hobbies, or at least finding a few people who will enjoy their work and get some pleasure out of it. There’s your sense of purpose. And to be clear I’m talking about creative hobbies here, not just ways of relaxing during spare time. I’m talking about the things that drive people, give them a purpose in life, a meaning to their existence. To a certain extent blog writing falls into that category. We do this for ourselves, but we also do this in the hope that at least a few people will enjoy it and take something from it. Ichii clings on to that, to a very small extent, with the talk of being etched into the tail end of history, but it’s a history that will likely have nobody to look back on. Removed from the world of human civilisation, creative hobbies take on a very different meaning. They can no longer be about any kind of recognition. Both Kanazawa and Ichii have pursued their obsessions because it’s a part of the human condition to do that, and deep down I think Ichii knew she was probably going to fail. In fact, before Chi and Yuu turned up, she probably realised that there was no chance of getting the plane finished on her own before the winter, but she kept working on it anyway. It was her passion.

So what happens when you throw all your energies into one big project, and it fails? This happened to both Kanazawa and Ichii, and both of them ended up embracing it and moving on. In the case of Ichii, she faces almost certain imminent death, dropping down to the lowest level of the city where she is unlikely to find the means to survive for long. But this also says something about the human condition, because there is something good about failure as well. I wonder how many people reading this will have failed at something in life and felt that strange sense of relief and acceptance. Sometimes it can feel like a weight lifted. It can feel OK. I think most people will understand that. It’s about the pressure and worry you felt about that big thing in your life that mattered, and the feeling that there is no longer anything you can do about it. Nothing is left to do other than to make peace with your failure and move on, and the worry and pressure is lifted. There can be comfort in that.

Yuu understands that, when she tops and tails the episode with her cheerful embrace of hopelessness.

“Maybe she’s getting along with it, with the feeling of hopelessness.”

Yuu has never had a big project, or a goal, or any particular drive to work hard for their survival. Chi is the planner, and the trier, but when the kettenkrad breaks down Yuu just happily lays there accepting their fate. In fact, she makes up a song about it. The sad truth is that ultimately it’s just a matter of time for these girls. They are delaying the inevitable, but there can be no long-term future for them in a ruined city, searching for the last remaining survival rations. This is a series that points out that the pursuit of goals, even the goal of survival, is all pretty pointless in the end, and that is heightened by Chi and Yuu’s situation, but it is also a series that says it doesn’t matter. Hopelessness doesn’t have to be a horrible thing. It’s about the way you live your life, finding pleasure in fun and beauty. There doesn’t have to be a goal, or a big meaningful success at the end of the road. It’s the way you enjoy the journey that matters. Yuu gets along with the hopelessness of life, and enjoys herself. There’s something incredibly powerful in that philosophy.   RP

I’ve been wondering when we might find another person when along comes Ishii.  You’re probably wondering “who ishii?”  No?  Sorry, that was a Chi-p shot.  Yuu have to forgive my warped sense of humor!  Ok.. Moving on…  Early in this episode, we are shown the contrast between Chi and Yuu even in what they observe.  As Chi notices the woman running, Yuu is spotting the flying plane.  As they draw one another’s attention to something amazing happening, they both shift focus to the other’s field of vision.  Never the twain shall meet, because they are so insanely different.  “And together we’re…” left hanging… sorry, Yuu.  Your attempt at humor was good, and just as you are taking a warmer approach to another human being, Chi is trying to be serious.  The more I watch of this series, the more I realize it’s one of contrasts on so many levels.  (I mean, even Ishii’s trip-and-fall: she stays down for entirely too long, and I should be worried about her health, but in direct contrast to how I should feel, I found myself laughing at the absurdity of it!)

Let’s rewind.  Something happens to the kettenkrad and Chi doesn’t know how to fix it.  Accident sets the stage for their encounter with Ishii, who is working on an airplane and needs help in finishing her plane.  Ishii helps fix the kettenkrad and treats the girls to another hot bath and some potatoes.  Those are the most horrific looking potatoes I have ever seen!  During this sequence a line is spoken that really gave me pause for thought, especially after last episode.  During House, I wondered why the girls would leave a perfectly nice home just to be on the road.  But we might have an answer here; “hopelessness is not having anywhere to go”.  The girls do though!  They have a world to explore so to them, it’s not hopeless.  But for me, I feel as though there isn’t anything to explore without people.  Sure, Ishii’s presence is proof that there are still people out there, but not enough.  Thankfully, Kanazawa was not the only one out there, but I’m 6 episodes in and we’ve only met 2 people!   Yeah, alright, they have places to go and people to meet; they are just few and far between.  Maybe not hopeless, but bleak.

Anyway, Ishii introduces the girls to some new technology and gets ready for Takeoff.  Chi observes that Ishii might be the last pilot in human history.  This was the second “pause for thought” moment.  The idea of being the last of anything in human history is infinitely sad to me.  It has never felt more depressing than now during a strange time in my life where so many things we took for granted have gone away and I wonder when, if ever, they will be back.  A simple thing like a handshake or a hug between friends seems like a decade away.  What happens when I suddenly remember the last handshake in my own personal history??  To imagine a world this close to the brink of death, with only a few survivors left, as things dwindle down… it’s heartbreaking.  There’s a song playing in my head, but it’s entirely too happy-sounding for what it says.  I’ll get back to that in a moment.   Chi has the wherewithal to take a photo of Ishii, the last pilot, before she leaves.  And as she takes off, the music plays that hauntingly beautiful melody and the camera lingers just past long enough to pass the point where something would happen.  And then, defying our expectations of time, something happens and the plane crumbles to dust and Ishii falls.  Thankfully she had the intelligence to pack a parachute but, with no way to control it, she just keeps falling to the lowest levels.  I wonder if we would even see her again.

There’s such a sense of finality to this series.  The world is abandoned, and people are so few and far between, we don’t know what to think.  Statues stand as quiet memorials to a once great people, all gone now.  And as Ishii drops, the idea that she may never be seen again is in my head.  Crazily, when I saw her falling, my thought was that the girls would do everything they could to get to her, but they instead pack up and start on their way to their next destination. It’s such a contrast to what I would do, and it jars violently with every fiber of my being.  But for them, it’s the logical next step.  And that music continues to play in my head, entirely too happy for the words spoken; Yuu’s song: “This is hopeless.”  For a three-word song, of which a 1/3rd of the words are hopeless, it’s an amazingly upbeat song.  The dichotomy is as striking as their decisions.  But then, they have directions to more potatoes and maybe that’s enough.  The open road, and the hope of some more potatoes.  It is not my way, but I suppose that’s not so hopeless after all.  ML

Read next in the Junkyard… Girls’ Last Tour Episode 7