Six Degrees of Who: The Darling Buds of May 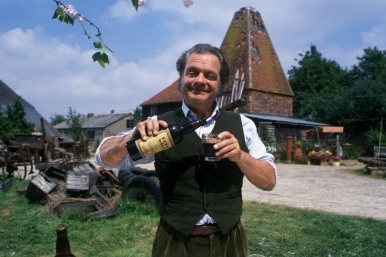 In this series of articles we look at thematic links between Doctor Who and other television series, and influences that often run both ways.  As always, let’s start by looking at the most superficial of links: actors who crossed over:

Rachel Bell (Pricilla P in The Happiness Patrol) played Edith Pilchester, a lonely women of limited means who adores Pop Larkin.  Moray Watson (Sir Robert Muir in Black Orchid) played the Brigadier, one of Pop’s closest friends, whom Pop always compliments by accidentally promoting him to “General”.  That’s about it for the regulars, with none of the Larkin family actors appearing in Doctor Who to date (the day David Jason does Doctor Who will be a very good day indeed), although both Pam Ferris and Philip Franks have worked for Big Finish.

There is almost endless common ground with guest stars, including Julian Glover, David Haig, Michael Jayston, Victor Maddern, Isla Blair, Michael Sheard (of course!), Michael Cochrane, Denis Lill, John Cater, John Ringham, David Collings, Nicolas Chagrin, Geoffrey Beevers, Celia Imrie and Howard Attfield.  If you like to go Doctor Who spotting when you watch other television series, then this is just about the perfect one to choose.

The Darling Buds of May is based on a magnificent book series by H.E. Bates.  It was all a far cry from his usual style of writing, which resulted in books that were academically worthwhile but not popular enough to earn a good living, so The Darling Buds of May was born of necessity and ironically will be the thing that Bates is always remembered for.  While the television series stuck to the books it worked best, but there are only five of them so a lot of the later stories had to be devised from scratch.  There is an utter perfection to the first series that is missing from everything that followed, as a consequence.  It was a very faithful adaptation.  I read the books afterwards and it was an experience akin to reading a Doctor Who novelisation!

And that first series of The Darling Buds of May really is as close to perfection as any television series has ever got.  I cannot tell you how much I adored it when it first aired, literally counting down the days until the next episode each week.  It aired in April 1991, and was a beautiful reflection of our own approaching British summer.  It presented a way of life that was utterly idyllic and probably impossible, as it included tax avoidance without consequence.  The taxman turns up: no problem, marry him off to your daughter!  And there was a theme that was very compelling to any viewers on the more nerdy end of the spectrum: seeing the nerd get the girl.  But to do so he had to abandon much of what made him the person he was, throw in his job and adapt to the Larkin way of life.  Like a new companion entering the TARDIS, he had to leave his old life behind him and be prepared to be completely absorbed into a different world.  Setting foot on that farm was the start of a new way of life.

Like the Doctor, Pop Larkin has no interest in being a conformist, and supports the underdog, as seen in his two best friends, Edith Pilchester and the “General”.  But where Doctor Who and The Darling Buds of May cross over the most is in their idyllic portrayal of the British way of life.  Doctor Who for most of its classic run had little interest in cities beyond using them occasionally as a way to show a high-stakes invasion (e.g. The Dalek Invasion of Earth, The War Machines, The Invasion etc).  It was all about the landmarks, almost never the inner-city way of life.  A far more common setting was the English village, and when we saw that setting we saw it as idealised and quaint.  Good examples are The Daemons and The Android Invasion.  And yes, Britain is often just like that, although farming is a far tougher way of life than The Darling Buds of May ever shows us.  But both series are there to entertain and delight us, to take us away from our troubles, if we need that.  Sometimes realism really should be the last thing on the agenda.   RP

Co-writer on junkyard.blog. Author of windowsintohistory.wordpress.com. Editor of frontiersmenhistorian.info
View all posts by Roger Pocock →
This entry was posted in Doctor Who, Entertainment, Science Fiction, Six Degrees of Who, Television and tagged The Darling Buds of May. Bookmark the permalink.

1 Response to Six Degrees of Who: The Darling Buds of May