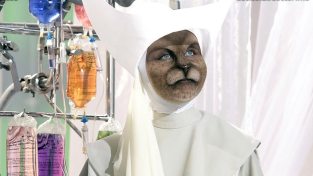 Don’t you just love a fresh start?  And this feels very fresh.  Although it is Russell T Davies second year as showrunner, it is his first story set on an alien planet, having previously grounded the series on Earth, with a couple of trips to a space station.  This didn’t go uncommented upon, and here is his response, with the Mill’s first attempt to depict an alien planet, somehow managing to convincingly augment the Gower Peninsula in Wales to make it look like a future landscape, complete with stereotypical flying cars, because you’ve got to have those in the future.

New Earth ends one story, continues another, and starts a couple of running themes.  This is David Tennant’s first chance to be the Doctor throughout an episode, having slept through most of his debut episode and only showed up to be the hero at the end.  Although it all feels very new it is grounded in the past as well, with Cassandra and the Face of Boe returning to reassure us that this is all part of the same ongoing series.  Cassandra’s story is wrapped up in a way that makes her more than just a one-dimensional villain, and not just because she bodysnatches her way from two dimensions to three.  She is a sinner who repents when she experiences the suffering of others and is redeemed, a much more interesting type of antagonist for the Doctor than the simple pantomime villains he often faces.  I have used deliberately biblical terminology there, because this brings us to one the themes of the episode: the Doctor as a messianic figure.

The Face of Boe’s story continues with him using a new-found ability to speak (from our perspective) to get all prophesying and mystical, referring to the Doctor as a “lonely god”.  This is the start of a long exploration of the level of power the Doctor has, and the following sounds pretty godlike:

I’m the Doctor. If you don’t like it, if you want to take it to a higher authority, there isn’t one. It stops with me!

Looked at in these terms the Doctor’s solution to the problem comes into focus.  This is Doctor Who rejecting the constraints of what is scientifically possible and working within the realms of the purely symbolic, with all science and logic having to stretch to fit the needs of the fiction.  This was the approach script editor Christopher H Bidmead found himself stuck with in the early 80s, when attempts to ground Doctor Who in the rational proved impossible.  No writer has ever been able to squeeze Doctor Who into that straight jacket, and you won’t do it as a viewer.  Check all notions of immersive viewing at the door when you become a Doctor Who fan, or be forever frustrated.

We know that however advanced the medicine of the future becomes, mixing up intravenous solutions and showering patients with them all isn’t going to work.  It is a shame that the word “intravenous” is in there, because it is the one thing that stops Clarke’s Third Law from applying.  But this is the “lonely god” in a hospital staffed by nuns who have strayed from the path, performing a miracle baptism and then asking the cured to lay on hands to heal all the rest.  All signs of the illness disappear within seconds, leaving not a trace of scars.  This ain’t science.

We are at the beginning of a curve which will be built up and up, and then subverted.  The Doctor is an obvious candidate for this kind of parallel, what with rising from the dead every few years, and solving a lot of his problems with an overtly magical form of pseudoscience, and Doctor Who has finally matured to a point where it can start to tackle this head on.

No less interesting is another curve we are at the start of: the rights of clones to be treated as people.  We will follow this curve through The Doctor’s Daughter and Journey’s End, and then Steven Moffat will pick it up and run with it in The Rebel Flesh and The Zygon Invasion.  I suspect we have not yet reached the end of that particular theme.

It’s been years since my first viewing of New Earth.

Back in the 90’s, I viewed a show called Babylon 5.  90 of the 110 episodes were written by one man.  It made me realize with crystal clarity that the writing was everything.  It could mean the difference between cult classic and epic failure!  Epic failure for Doctor Who could lead us back into the wilderness where there is no new Who to be found anywhere.  So it’s important that we get the writing right.  Special effects are a perk; they are nice, but not a necessity.  New Who has the effects down pretty well, but writing can be hit or miss.  We get some epic wins and some epic flops.  In either case, the actors have to convey what’s written but if the story isn’t there, even the best actors can’t make the masterpiece they might want.

Russell T. Davies had written New Earth and I can’t help but question what he was thinking!  In retrospect, we can look at RTDs body of work on Doctor Who and realize he did emotion extremely well.  But there could be too many plot holes or silliness that took too much of a toll on the episode.   Doctor Who should be fun, without being dopey and sometimes, like farting aliens and burping garbage cans, we get the latter at the expense of the former.

Let’s look at the issues!

Now, the episode isn’t without some redemption. There are some great visuals like the shadows of cars flying cast on the Doctor and Rose!  There is some truly great music and some marvelous lines.  I love a bit of foreshadowing too: “He will only talk to a wanderer, the man without a home, the lonely god”.  Another of RTD’s long games!

If there was one line that really nailed both the character and the show in general it was “Life wins out”.  It’s a reminder of the Doctor’s old adage: “While there’s life, there’s hope.” Even in the face of Death the Doctor has always found the good.  In Genesis of the Daleks Baker says “out of all their evil must come something good”. It is reflected when The Doctor takes Cassandra back to find her own redemption (albeit in another body).

Remember the old adage: what doesn’t add to the story, takes away from it.  There was too much here that did not add to the story.  It doesn’t have to be new all the time, but if it retreads old ground, the writing has to be near perfect and this story was not!  Nor was it all that new.  In fact, there was very little new about New Earth.   ML

Read next in the Junkyard… Tooth and Claw