The Girl Who Died 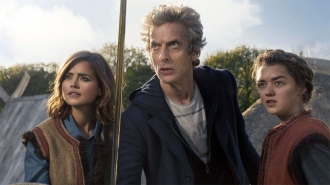 Doctor Who is often about figuring out how the Doctor will get out of a situation, rather than whether he will get out of it or not.  That was the point of most of the cliffhanger endings.  This episode plays that trick, but with a guest character, because the title is a deliberate spoiler.  The “girl” must refer to Ashildr, but if she “died” how is she back again next week, which is something we already knew to be the case when the episode aired (and for anyone avoiding all spoilers, the title of the next episode does the same thing)?  Of course, the reason the “girl” must be Ashildr is she is the only female character of note in the episode apart from Clara, what with Doctor Who’s stubbornly frequent failure to pass the Bechdel test, or rather ability to pass it only on the grounds of the companion being female.

Ashildr is a fascinating character.  Like the Doctor, she is completely different to her own people, and much of that difference is due to her ability to imagine adventures.  The difference though is that her own people love her for her difference, and she has a place where she belongs, so when the Doctor makes her like him (which we will get to), he rips her away from her own people because they can never travel her path.  She just gets ripped away very, very slowly.

I’ve always been different. All my life I’ve known that. The girls all thought I was a boy. The boys all said I was just a girl. My head is always full of stories. I know I’m strange. Everyone knows I’m strange. But here I’m loved. You tell me to run to save my life. I tell you that leaving this place would be death itself.

Ashildr is the key to the story because she is the storyteller.  The Mire rely on their reputation and the image they portray through pretending to be a part of other people’s stories.  Ashildr tells a better story, and Clara brings that right up to date by turning the story of their defeat into an internet video, complete with the Benny Hill Show music.

A story to save a town, and a puppet from a nightmare. You see, you’ve just seen the world through the eyes of a storyteller. The mighty armies of the Mire. Brutal, sadistic, undefeated. Even I believed the stories. But after today, no one will again.

So, like Steven Moffat’s whole big vision for Doctor Who, this is exploring the theme of storytelling, and doing so in a new and interesting way.  That’s the point of the threat this week being something of a silly one.  The Mire are deliberately shown to be a race of bullies, and they are undermined by laughing at them.  Technology is also used against them, combined with storytelling:

But you see, that’s the trouble with viewing reality through technology. It’s all too easy to feed in a new reality.

This also functions as a metaphor for television itself.  And within the medium of television, Vikings have horned helmets.  These are Doctor Who Vikings.  They had horned helmets in The Time Meddler, and the same applies here.  The reason behind-the-scenes was that it is easier to just give them horned helmets than put an awkward line into the script about why they didn’t actually have them in true history, but in any case this isn’t true history, it’s Doctor Who.  It’s a story.  It rarely shows much interest in true history.

As is often the case with Doctor Who episodes, we get a massive mood whiplash from silliness to tragedy and moral ambiguity, with the death and resurrection of Ashildr.  The Doctor’s refusal to fight and his brilliant alternative scheme comes at a price, and that price is her life.  But this time he is not prepared to pay the price because he has learnt the lesson Donna taught him in The Fires of Pompeii.

He learnt it wrong.

The lesson was this: save somebody.  But this is not just saving one person amongst a massacre of thousands.  This is the Doctor trying to save everyone, and avoid paying the price that he must pay in most of his stories.  Stories have to have a balance to them: they can’t always have a happy ending.  He forces the happy ending, and there have to be consequences.  The story must reassert itself, and fight back against the Doctor’s cheating.  The balance will be restored.  And in that stunning moment where the fate of Ashildr over time is communicated simply through the facial expression of an incredible actress, this story refuses to be twisted into the shape the Doctor wants.  There will be no happy ending here.   RP

I follow a lot of shows.  I actually had to write them down at one point so I’d know when they were on.  But I don’t let any of them control my life.  If I have the opportunity to go out, I take that first.  Sometimes games will take precedence. Sometimes, I just let a few episodes build up before starting a show.  Even Game of Thrones can wait a week, and considering the “water cooler talk”, that’s saying something!  The only show that this isn’t true for is Doctor Who.  It has always been such a highlight show for me, that as soon as I’m able, I want to sit and watch.  I figure even weak Who is better than most other shows on TV.  And when they announced that Game of Thrones alum Maisie Williams was going to guest star, I felt even more excitement.

Maisie is best known for her work in Game of Thrones as Arya Stark.  Starting off as a little girl, she is now one of the most frightening players in the vast game.  She’s amazing in the show and carries herself with a power that is awe inspiring.  But for all that darkness, she comes to Doctor Who as an innocent girl who ignorantly wages war on space Viking-pirate Odin.  (Didn’t God appear in the clouds in Monty Python and the Holy Grail, the same way Odin did in this story?)

The episode is largely a build up to get the Doctor to finally realize where his face comes from.  A full season and a half in the making and we get him to realize it with the line: “I’m the Doctor and I save people.”  It is a great line but once he does come to understand what it’s for, he can come to terms with making Odin-awful decisions like installing the Mire’s solid state chip into Ashildr’s head making her so immortal she actually outlives Captain Jack, who had the time vortex dumped into him.  No matter what else goes on with this episode, including that idiotic Benny Hill theme, it gets overshadowed by the revival of Ashildr.  Accepting that the Doctor decides something akin to “the hell with the rules” (which last time didn’t work out well for him either) it still doesn’t make a lick of sense that this chip would keep Ashildr alive as long as it does.  I accept that at the point of this episode, we don’t know how long she’ll live, but the little we do know just paints the Doctor in a very poor light.  Why not resurrect others?  Why just the little girl?  She caused the problem to begin with.  People died because she challenged the Viking pirate gods.  But she’s the one resurrected?  Not to mention, like Star Trek: Into Darkness, if you cure death, where are the threats?  Why ever show anyone dying again?  If this little chip is all it takes, the Mire would be the most hunted race in the universe because that chip keeps people alive.  Forget this great and mighty civilization, they would be hunted by everyone, including the truly great and mighty Cybermen and Daleks.  And Ice Warriors.  And Sontarans.  And Zygons.  And every other race that was so much better than the bobble-headed Mire.  Oh, I see it now… we’re in a mire with the Mire!

I don’t mind Doctor Who episodes being silly but when you are asked to wait extra-long for a season, you can’t give us The Girl Who Died.  It’s weak in every sense of the word.  What it does do well though is show Capaldi coming to terms with his emotions a bit, better able to actually hug his companion and being the warm character we think the Doctor should be. Season 9 was a tough season to stomach for me, but while they often got the stories wrong, they were improving on Capaldi’s Doctor which eventually brought us to season 10 where Capaldi hit a home run on nearly every episode.

We just had to get through watching Ashildr living forever…. This season was going to feel as long as her unnatural life!   ML

Read next in the Junkyard… The Woman Who Lived

Author of windowsintohistory.wordpress.com Co-writer on junkyard.blog Editor of frontiersmenhistorian.info
View all posts by Roger Pocock →
This entry was posted in Doctor Who, Entertainment, History, Reviews, Science Fiction, Television, Twelfth Doctor and tagged Ashildr, Clara, Peter Capaldi, The Girl Who Died. Bookmark the permalink.

2 Responses to The Girl Who Died