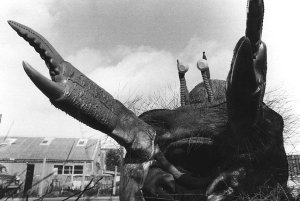 This is the first of two Classic Series stories set in a holiday camp, a location that would have been instantly recognisable to contemporary viewers.  It might be expressed in terms of a colony here, but the imagery would have been completely obvious to anyone watching at the time, complete with the annoying music, and a very 1960s “Beauty President”.

Oh, very nice. Very nice indeed. You must certainly be the most beautiful young lady in our Colony, and are quite sure to be elected our next beauty president.

In the days before it became cheaper to fly abroad than stay in this country for a holiday, these kinds of camps were enormously popular.  They still exist.  In fact, living in the south of England I am a relatively short drive from at least two of them.  They remain useful places to take children for holidays if you don’t want to go through the stress of trying to take them on a plane.  But at the time The Macra Terror was made they were a phenomenon.  Like any organised family activity, there was always going to be an element of enforced fun, and The Macra Terror plays on that and turns it sinister.   This is a colony that has been modelled on a holiday camp, with the colonists brainwashed by a distortion of the fun holiday atmosphere.  And the brainwashing works on just one of the TARDIS team: Ben.

The reason it doesn’t work on the others is blindingly obvious: they are not of this world.  The Doctor and Jamie clearly have no experience of holiday camps, and Polly is too posh.  This might be the future, but it’s modelled on a world that Ben hails from, and he falls victim to it.  Drawing that distinction between the two male companions allows them to have defined roles in a story for the first time, which has been a difficulty with this slightly-too-large regular cast.  For the first time since The Highlanders, Jamie is used properly in this story rather than just sharing Ben’s lines or being incapacitated. He is the hero whilst Ben becomes a temporary villain.  Ben then gets to redeem himself in the end by saving everyone, and the story is never sneering towards him.  It is one where everyone’s failings are brought into sharp contrast and then they are allowed to overcome them.  Jamie follows his instincts, which work against him.  When he encounters a Macra that isn’t even moving he throws a stone at it!  Meanwhile, Polly is playing the usual unenlightened 60s version of a damsel in distress, crying and screaming repeatedly and looking for the nearest man to save her.  Then we have the Doctor, who for all we know is helping some human colonists to wipe out the pre-existing population of a planet.  It’s unclear either way, and eventually gets retconned in Gridlock.  But the point is, he never bothers to find out: he’s just busy finding corners of the universe with “evil” in them to fight.

If I could wish one missing story back, this would be a strong contender, and failing that an animation would be a lot of fun.  The story ends with the Doctor and his companions dancing their way into the TARDIS – what a loss to the archives!  Then there’s the machine that tidies up the Doctor so he can see his face in his suede shoes, and the “rough and tumble” machine that reinstates his usual untidy appearance.  And of course the Macra itself (because there was only one prop of course), which we can only see in brief clips, reputedly the most expensive prop ever made for a television series at the time.  We can watch part of the cliffhanger at the end of the second episode, with the Macra claw dragging the controller away, which is one of three episode endings featuring the Macra.  It ain’t CGI, but a tank-sized 1960s Doctor Who monster is a painful loss to the archives.   RP

You know what hurts?  Being grabbed by a crab.  Imagine how awful it would be if that crab was the size of a large horse or even an elephant?  Well we don’t have to imagine; we can see it with The Macra Terror.  Oh, wait; no we can’t!  It’s another of the lost stories that the BBC did not have the foresight to save.  Luckily some still photos exist as well as the odd piece of video footage.  But what do we learn from this story?  That the easiest way to hide from a Macra should be to walk through a doorway.  They are far too big to creep, sneak, skulk, lurk, prowl, hide, or even fit through a door.  Yet they seem to do an amazing job sneaking up on people exactly as most horses and elephants don’t!  We’ve also learned that Polly, who usually looked beautiful, looked awful with short hair.  Clearly there’s another missing episode where they go up against some clipping sheers and she loses.    Poor Polly!

My first memory of this story comes from the Target novelization.  Let me set the stage.  I’m in high school, I’m thinking junior year, and have to read some horrendously boring history book for school.  My mom tells me to go to my room where I lie on the floor with the history book opened… and in between the pages, I’m devouring The Macra Terror.  I must have seemed like such a good student at that point, sitting in my room, reading my text book (not) and just gobbling up this great story.  I don’t think I read it in one sitting; there was only one Doctor Who book I did that with, but I was up there for quite a while.  (No, I have no idea how I did on that test…)   Imagine my glee when the Macra turned up again in Gridlock nearly 40 years later.  Sadly, they lost any sense of terror by then, hence the title not being The Terror of Gridlock.  (It could have been titled The Fury of Rush Hour though and no one would have questioned it.  Fact!)

The interesting thing about The Macra Terror is that there’s not a whole lot new about it.  Even when it was new, the idea of the base under siege was being used for nearly every story of Patrick Troughton’s era.  The reason we still love it is because those base-under-siege stories are tremendous fun!  Troughton and Hines are, as always, a fantastic team.  Ben and Polly were a great double act as well, so the result here is having a four-person TARDIS crew that works very well together under attack and trying to save a base from giant crabs.  And that’s something else that I think worked very well for this story: the Macra, until episode 4, appear to be animals, or large bugs.  They are not something to reason with.  They move about at night like a predator.  Just imagine how creepy a large spider-like creature walking around at night would seem and in that glorious era of black and white.  It’s not until episode 4 that they seem to be able to communicate and I think they lose something in that, but it’s the final part, so there’s little time to feel the sting as the action has to reach a high note and resolve.  So at the point it finally gets to the standard monster with intent instead of animal working on instinct, it’s wrapping up.

I think stories like this works better when there are no humans helping the invaders but we seem to have that one story earlier with The Moonbase. The problem with getting the mix right is that, if you have human agents helping you, an intelligence should be behind that control.  In the case of the Macra, they should have remained more instinct as opposed to reason without assistance from the humans.  I get the need to keep an alien race alive; I’d want to do the same thing, but not at the cost of my people.  Nevertheless, the story held my interest in book form and hopefully will do so again visually one day if it ever turns up (or gets the animation treatment!)   One can always hope.  I did once, and it happened.  Who knows, eh?  Who knows!

Plus who wouldn’t want to see the Doctor and crew dance their way out of a story?  I would!   ML

Read next in the Junkyard… The Faceless Ones

1 Response to The Macra Terror