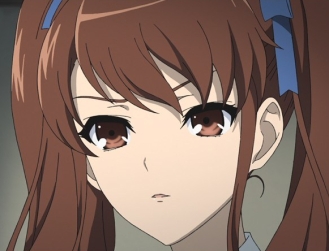 Twenty-six years ago a student of Yomiyama North Middle School’s class 3-3 died tragically. The other children in the class didn’t cope well with their loss and carried on as if it had never happened, with the desk of the dead child even taken to their graduation with them. Twenty-six years later, transfer student Koichi Sakakibara finds that those students’ actions are still having consequences. “The rest of the story is…”

That’s all evident from the exposition-heavy pre-titles, which gives away just enough information to allow us to understand the basics, while leaving us with plenty of questions. It is immediately worth noting something that might not be clear to viewers who haven’t watched much anime: students are almost universally referred to by their surnames in Japan. So when we hear things like this:

“Misaki’s right there. She’s not dead.”

…it’s safe to assume that Misaki is a probably going to be a surname. Similarly, something very odd happens when Koichi’s new classmates visit him in hospital. They ask to call him by his first name. It’s easy to miss the significance of this in the Western world, but in Japan it’s completely bizarre. They’ve just met him, so asking to call him by his first name is completely inappropriate and disrespectful. That would be something reserved for boyfriends/girlfriends for mixed genders, or very close friends for the same gender. What have they got against his surname?

Before we get any further into this, an explanation of what you are reading and what to expect. For the next three months we will be looking at the anime series Another on an episode by episode basis, following on from similar approaches for Haruhi and Erased. You get two for the price of one. My articles are written from the point of view of a relatively seasoned (although I wouldn’t say expert) anime viewer. My friend and co-writer on this blog Mike will append his reviews for each episode, and his are much more the first impressions of the newbie viewer, always fascinating to read. We are currently doing something very similar with Babylon 5, roles reversed. He’s not quite the newbie any more, as this is our third series we have written about together, but I dragged him kicking and screaming into the world of anime and so far the experiment seems to have been a success. After the sublime Erased I was keen to find something equally impressive for him to watch. That would appear to be impossible, because Erased is in my opinion the greatest anime series ever made, certainly the greatest I have watched. I am hoping Another comes close, and with its creepy themes and gloriously halloween-ish opening credits I think it is right up Mike’s street. We will find out. There is a gothic style to the whole thing, with a moody, dark palette and random shots of creepy dolls interspersed throughout the episode, at this stage without explanation. For those who are unfamiliar with our writing styles, we will both try to avoid spoilers for future episodes, but will be writing in detail about the episode in question each week, so if you haven’t watched this series yet I would recommend instead looking at my series overview article, or better still joining us on this journey each week, watching each episode before you read our reviews. Another is a fabulous series, so you won’t be disappointed.

So let’s take a look at some of the questions this episode raises, and some of the information we are given. Much of the fun of this series is trying to piece together what’s going on. Koichi is living with his aunt and grandparents. His aunt is immediately an interesting character because she says she went to the same school fourteen years ago. That surely will make her a useful person for Koichi to get information from. His visit from his classmates in hospital raises questions. Apart from the first name thing, they behave very oddly, especially Izumi Akazawa, who is head of something called “counter measures”. That doesn’t sound like any school club I’ve ever heard of. Then there’s Mei Misaki. Koichi seems to be the only one who can see her, with Yukari Sakuragi looking confused and worried when he mentions her. What is she doing in the hospital, and who is her “poor other half”? Isn’t the basement level just going to be for storage and the morgue? She certainly sets off along a very dark corridor. And later when they meet again she doesn’t seem to remember the encounter in the hospital. If you were paying attention to the opening dialogue, her surname is that of the dead child from 26 years ago. Is she a ghost? Everything seems to be leading us in that direction, and she says this to Koichi:

“They associate your name with death.”

…which must of course refer to his surname, Sakakibara, which the other students refuse to use. Finally, Koichi gets a warning from Misaki:

…which is a well-worn but effective horror technique: a warning to the curious not to meddle. But what is the nature of the danger here? The homeroom teacher says something very odd too:

“I can guarantee you will all graduate in prime health.”

A teacher might normally be expected to promise academic success, but “prime health”? That sounds like he is taking responsibility for protecting them in some way, and there do seem to be a lot of injuries and illnesses going around already. One final quote to keep in mind:

“Here it’s the group that matters more than the individual.”

That’s very Prisoner-esque. And as we know from The Prisoner with its graves on the beach, that philosophy can easily lead to tragedies.

So, with many questions and few answers we reach the end credits, which couldn’t be more of a contrast with the opening. We’ve gone from dismembered dolls and an eyeball chandelier to happy teenagers in a bright sunny room. This is going to be an interesting journey…   RP

I started Another today because I had time.  I should have been watching Erased again to make notes but I’ve been dying to watch Another instead, so why not?  After an opening monologue that is intensely disturbing played over images that never shows who is speaking, we are introduced to a cast of characters that would make Cthulhu blush.  These people have names that are so complex to pronounce, the only option I have for writing them down is to look them up.

It seems the main character is Koichi Sakakibara which is going to be fun to write about.  He is in the hospital for a collapsed lung (or so I gathered from the English dub of the episode during a conversation with his father.)  Interestingly, his father says he had that happen twice, after which it never happened again.  With two lungs, I can understand that.  He is visited by his classmates Izumi Akazawa, Tomohiko Kazami and Yukari Sakuragi.  These are all strange kids from ninth grade class 3.  After being released from the hospital, he gets into the elevator and meets Mei Misaki.  Misaki is in the corner of the elevator where she is initially missed by Sakakibara, but when he notices her, he tries to talk to her.  She says she’s got business in level B2.  “My poor other half is waiting for me.”  She leaves, walking down a dark corridor with Sakakibara looking on.

The music is intensely unnerving.  I realized this same scene without the music would never have had the same effect on me that this did.  I don’t think I blinked. Which may be a good thing because so far there have also been a series of images that look like demonic dolls.  They appear on screen for less than a second, but they are there long enough to impress me with their otherworldly qualities and I love it.  This is a series right up my alley!

Later, at school, Sakakibara meets a classmate with a weak heart and a girl with a sprained ankle.  He asks the girl where Misaki is, and her eyes go wide.  He then spots her on the roof where he goes to have a conversation with her.  She explains that class 3-3 is closer to death than other classes.  Class 1, 2, 4, and 5 are pretty standard, but class 3 is different.  Again, the use of tense music is an art.  The tension is ramped up and she tells him not to try to get close to her.  Before she leaves, whispering something that I simply could not make out.  And the episode ends making me wonder if I can squeeze all 12 episodes in tonight.  I really want to watch another.

There are two observations I have.  Misaki is not a name I’m familiar with so I’ve misspelled it each time I’ve tried to write it.  “Miska” was the first, inverted attempt and I nearly got whiplash from the doubletake.  Miskatonic University is the school created by H. P. Lovecraft for many of his short stories.  Now, I know it’s just an error of my typing but considering the creepy factor of this series might be around 1000, I can’t help but find that ironic.  Second, also around Miskatonic Misaki, she’s wearing a bandage over her left eye.  Ironically, I just typed up a little something about that recently.  Odin, the All-Father of Norse myth lost his left eye, but gained wisdom.  I wonder what wisdom our new friend will have to share with Sakakibara.  Only one way to find out….  ML

Read next in the Junkyard… Another Episode 2

Co-writer on junkyard.blog. Author of windowsintohistory.wordpress.com. Editor of frontiersmenhistorian.info
View all posts by Roger Pocock →
This entry was posted in Anime, Entertainment, Reviews, Television and tagged Another, Halloween, Horror. Bookmark the permalink.