The Fall and Rise of Reginald Perrin Episode 1 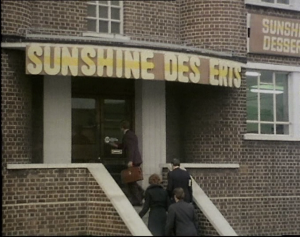 I first watched The Fall and Rise of Reginald Perrin as a child (not on first broadcast – I wasn’t born), and found it absolutely hilarious. It appealed to me on one particular level, mainly thanks to the farting chairs in CJ’s office and the frequent appearances of a stock footage hippopotamus to represent Reggie’s mother-in-law. As an adult I bought the series on DVD and was struck by the melancholy nature of the series. British comedy is often tinged with sadness, and this is the perfect blend. Oh, and I still loved the farting chairs.

Leonard Rossiter was of course a comedy genius, and his performance in this episode takes us on a journey through the first stages of his mental breakdown. Over the course of three days his world starts to unravel. We start on a Tuesday, that most uneventful of days. Reggie goes through the same routine he lives through every day, with very little variation. His wife doesn’t help, saying the same thing every time he leaves the house, including a rather pointless question: “back at the usual time?” Reggie is always back at the usual time, and that time is always 11 minutes late, due to train delays which are more reliable than the timetables.

He walks through Coleridge Close, Tennyson Avenue and Wordsworth Drive, the very picture of 70s suburbia. As he approaches the station he joins a crowd of other business men all dressed the same, in business suits, carrying umbrellas and briefcases. These are cogs in a machine, men who have lost their individuality, swallowed up by the bland and repetitive 9-to-5 office toil. He arrives at Sunshine Desserts eleven minutes late, but the sign says “Sunshine Des erts”, an indication of his world started to fall apart. This will be the day Reggie starts to lose his mind.

Everything about this episode brings home his humdrum, repetitive existence, where nothing seems to really matter. The genius of the writing is that it manages to be hugely funny, while portraying a boring life. That takes some doing. CJ’s office is full of photos of CJ, and he repeats his catchphrase whenever he can, in his self-aggrandising way: “I didn’t get where I am today…” Reggie is surrounded by yes men (“Great!”; “Super!”) a role he can’t quite manage himself. His mind wanders into a fantasy sequence about his secretary Joan. He is starting to lose concentration, and he is also fantasising about cheating. This is a man who is looking for an escape route. CJ notices, and responds with a thinly veiled threat:

“We’re not one of those dreadful firms that thinks a chap’s no good after he’s 46 goodbye Reggie.”

There is definitely no full stop in that sentence. The first day is complete and a huge amount of information about Reggie’s day has been imparted to the viewer, plus a lot of very funny comedy, and we are only at the eight minute mark. Over the next two days Reggie continues to lose control of himself, fantasising more and more about outrageous behaviour, including flashing at his neighbours, and forgetting what he said earlier in the day. He is surrounded by absurd characters (well, mainly the male ones), including Doc Morrissey, who is the one person who could have identified his symptoms of depression and warned Reggie that he is heading for a mental breakdown, but of course Morrissey is just as useless as everyone Reggie works with. There is a rather prescient joke later in the day about the frustration of malfunctioning computers, when some data about flavours of ice cream is fed in to the system and the resulting top three flavours come out as “bookends, pumice stone and West Germany”. Rossiter’s performance during this scene in particular is remarkably clever. He is breathless and his voice is starting to crack. This is a man breaking down in front of our eyes, and we are invited to laugh at that. This is dark humour, when you think about it.

The interesting thing about the third day is that Reggie is trying to find a solution to his problems. He makes a change. Snapping out of an obvious moment of depression, where he is reluctant to leave, he steals a flower for his button hole from a neighbouring garden. He is starting to rebel. Then he reaches a revelation:

“From now on, I’m going to do everything differently.”

For a while that seems to work for Reggie. His umbrella finds the hook on the stand for the first time, as if he is starting to regain control of his life. He catches a later train “because the sun was shining”. He seems to have found a new philosophy of life that might just work. The really clever bit is the foreshadowing that happens when he walks under the sign. It is the same as the day before, so this indicates that he has stopped his life from falling apart… until one more letter drops just as he enters the building and breaks on the steps behind him. And it all starts to go wrong again. The biggest problem is he doesn’t know how to rebel. He ends up harming himself instead. His three course meal of “ravioli, ravioli and ravioli” is hilarious, but just makes him “rather full of ravioli”, and by the time he returns home he is drunk. His scream that ends the episode says it all. He is a man who is trapped, and his escape plan has only made things worse.

The Fall and Rise of Reginald Perrin is a great series, deservedly remembered as one of the highlights of British comedy, and I love every minute of the first two seasons (the third is a bit of a slog), but for my money this first episode is an absolute masterclass. It’s not just that it’s enormously funny. If anyone wants to know how to structure half an hour of television, take a look at this episode, which has as much character development as you would find in most series over the course of a whole season. This is what happens when writing and acting come together in perfect harmony, and both are the work of a genius. It’s great… and indeed, super.   RP

Author of windowsintohistory.wordpress.com Co-writer on junkyard.blog Editor of frontiersmenhistorian.info
View all posts by Roger Pocock →
This entry was posted in Entertainment, Reviews, Television and tagged Comedy, Leonard Rossiter, The Fall and Rise of Reginald Perrin. Bookmark the permalink.