The Girl Who Waited

At the risk of stating the obvious, this is Karen Gillan’s finest moment in Doctor Who.  It deserves to be said and said again, because she is stunningly good here.  Playing a character significantly older or younger than yourself has got to be one of the most difficult challenges an actor can take on.  The make-up and prosthetics can only go so far.  The actor has to sell it.  The skill with which Gillan uses even subtle changes of expression to show how harsh life experience has changed Amy is breathtaking – just look at the scene where she sees herself in the mirror.  The thoughts and feelings of both Amys are communicated so clearly to the viewers.  And there was a lot of pressure on her to get this right because of the focus on such a small cast – her performance is really in the spotlight.

In terms of the season as a whole, one thing goes badly wrong here, and one thing get put right beautifully.  There is no acknowledgement of the loss of Amy and Rory’s daughter, which is swept aside for the episode.  Nothing so much as a “tell Melody I love her” from Amy.  This is simply not realistic – the loss of a child would be eating away at Amy and would still be eating away at her years later.  Knowing that child turns out OK in the end isn’t going to change that.  The whole story arc is going badly astray at this point, and Amy simply wouldn’t be starting this story going off on a jolly adventure.  In contrast, the thing that get’s put right is Amy and Rory’s relationship, because for the last season and a half it has seemed like Rory is devoted but Amy is indifferent.  That can’t work.  However, in this story the depth of their relationship really comes across well, and the moment where the two Amys are discussing him and saying he is “the most beautiful man I’ve ever met” makes everything click nicely in place and show the viewer that, yes, she is devoted to him, and their relationship is strong.  She simply has a different way of showing it, and strong relationships come in all shapes and sizes.  This is the first time their relationship really makes any kind of sense as being anything other than disfunctional.

This is probably the first Eleventh Doctor story where everyone doesn’t get completely overshadowed by Matt Smith (although he has to be put in a box to achieve that) and this is really Amy and Rory’s story… until that horrible decision where an Amy has to be selected.  This is one of those rare moments where it is difficult to like our hero, because it leaves us with the nagging feeling that he should have somehow found a third way.  We have already seen the TARDIS support two versions of Amy in “Space” and “Time” (Comic Relief specials), but I suppose that can be explained away by the existence of more than one version of the TARDIS.  Even so, one wonders if he is entirely telling the truth in that moment.  Besides, this is the Doctor, the man who finds a solution even when there isn’t one.  He doesn’t abandon a friend.  Unless it’s Adric.

…which brings us to Rory’s choice.  In a way it’s a no-brainer, and he is always going to go with the version of Amy he can live his life with as they always wanted to.  Youth wins, and this episode shows us something quite bleak in that respect.  However, the no-brainer argument is the logical, mathematical opinion, and in reality he still has to choose a version of the woman he loves to condemn to non-existence, something the Doctor has said before is worse than living and then dying.  It’s an amazing moment and this is the sort of thing that really sets apart 21st Century Doctor Who from the Classic Series – there are so many of these kinds of moral conundrums raised, which spark off debates and make the viewer really think about things.  And that has to be a good thing.  RP

To really understand the mixed feelings about this episode, it helps to understand the season overall.  Series 6 (or season 32 if you follow on from the original series), opened with one of the most impressive episodes of the modern era; maybe even of the whole 53 year run with the two part Impossible Astronaut/Day of the Moon.  The problem is that the season then spends time all over the map from great stories (The Doctor’s Wife) to great ideas with less memorable stories (The Rebel Flesh/The Almost People) to completely unmemorable episodes (Let’s Kill Hitler, Night Terrors, Curse of the Black Spot).  This season gave us a mid-season break after A Good Man Goes to War.  In this episode, Amy loses her child only to learn that her child grows up alright in the end but with the season break, it seems Amy has basically forgotten about her pregnancy and her child.  She moves on.  Which is a shame because not only is it unrealistic, it misses some good dramatic opportunities!

Unsurprisingly, there are two ways of viewing this story; two streams of thought, if you will.  Viewed as part of the series, The Girl who Waited does not hold up because of this.  Even with the knowledge of her child becoming a woman she has already met, it doesn’t change the fact that she was denied raising her child.  This is the child she and her husband were going to raise together.  It is just too much to accept that she isn’t still a wreck from her ordeal of losing her baby.

However, viewed as a story on its own, this story gives Karen Gillan a chance to shine and she does so brilliantly.  She plays two versions of herself: an older version and her current version.  She’s trapped on her own without the Doctor and Rory to save her.  She has to survive while innocuous looking “handbots” wander the stunningly pretty landscape ready to zap her.  She plays both versions sublimely.  She’s absolutely the scared, young friend of the Doctor one minute, and the next we’re seeing the tough-girl persona who has survived for so long destroying these robots.  She’s amazing.  The scenery is amazing.   The resolution, while heartbreaking, is also amazing.

That brings me to the second element of the story: Rory and the Doctor.  The revelation that Rory can only choose one version of his beloved wife is devastating.  Arthur Darvill does a great job conveying the heartbreak and emotion present in the decision.  Matt Smith’s Doctor also conveys the sorrow in being the one to force that decision with skill and heart.  Making this decision is like making the decision to pull the plug on a loved one.  The Doctor can’t make the call; he knows what he would do.  He has to rely on Rory, who can barely vocalize it, but has little choice in what the decision will be. 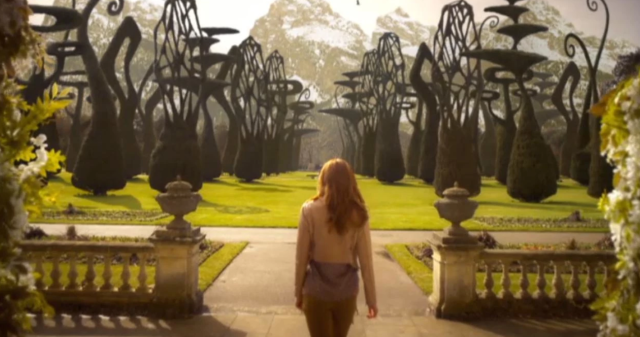 Like so many stories in Doctor Who, this is another experimental one and I find Doctor Who works best when it tries the untested. Here again, the idea of “Two Streams” works. What happens if you’re separated from your friends and stuck on an alien world? What happens to you as you age? Do you get angry with those friends for not finding a way to save you? Do you become bitter? Move on? Forget? At the heard of the story, Karen Gillan conveys the emotions as she and her older self talk about the man she loves and comes to her own realizations. She carries this story. And her realization about the betrayal at the end is hard to watch but she understands that this is not “death” but a reboot on her life from the point she lost her friends.

So go with the better thought process, the one that sees this story as an episode in its own right and not as part of the overall arc of the season. It will hold up better that way. The other way will just make you bitter and forget about this otherwise great story!   ML

Read next in the Junkyard… The God Complex

3 Responses to The Girl Who Waited