Terror of the Zygons

If only… the Skarasen as it lives in our imaginations.

While we got endless Dalek and Cybermen stories during the classic era of Doctor Who, there are some monsters that seemed to have a lot of unexplored potential. Apart from a cameo appearance in The Five Doctors, the Yeti never featured beyond their initial two Troughton stories. The Autons offered endless possibilities but suffered a similar fate. But there is one Doctor Who monster in particular that never made it back during the classic series despite being an obvious candidate for a sequel: the Zygons.  Of course everyone has their favourites amongst the one-hit-wonders.  I would love to see the return of the Chumblies, but that’s just me!  The Zygons are the one classic series monster that everyone would probably agree should have been back again for a rematch with the Doctor, but bafflingly it never happened… at least not for nearly 40 years, but that’s another story, and well beyond the realms of the classic era.

So why didn’t they come back? It is probably easiest to answer that question by looking at the monsters that did make a quick return.  What links them all is that they are very strong ideas: the mutant retreated into a travel machine during a nuclear war; the humanoid who has replaced all his body parts and removed his emotions; the robotic abominable snowman animated by a super-being; the warrior viking from Mars; the alien entity that animates plastic and turns shop dummies into weapons; the Doctor’s archenemy; the reptile who has a prior claim to our planet.  They are all ideas you can run and run with.

Now let’s look at Terror of the Zygons in comparison: the opening scene is straight out of The Sea Devils, the shape-shifting was done in The Faceless Ones, and the organic technology was a concept used in The Claws of Axos.  Unoriginality is not necessarily a major cause of complaint, particularly for those who had not seen the earlier stories, but it doesn’t necessarily inspire showrunners to think “let’s get them back again straight away”.  Viewers north of the border must surely have winced at the stereotypical approach to Scotland (“Can ye no send over a few haggis?”), which brings back bad memories of Welsh-boyos in The Green Death. The last episode ends with a lazy joke about Scottish meanness.

But probably the most significant reason for the lack of a quick sequel is the Skarasen, which does taint the story quite significantly.  When Sarah Jane smashes that war of words with Rose in School Reunion with “THE LOCH NESS MONSTER!!!” it sounds amazing, but if only Rose could have seen what she was talking about for herself she would have been laughing for a different reason.  As a model it’s probably not all that bad, but it really is a big problem when it is superimposed on location footage, as the difference in focus screams of low-budget. It could have all been avoided so easily – why have the Skarasen in the story at all? The Zygons are a brilliantly designed monster in their own right, so they don’t need a pet with big teeth! The scene in London when the Skarasen rises from the Thames is doubly annoying, because it is such a silly, tacked on scene.  Watch The Lost World: Jurassic Park to see the same mistake made on a big budget.

So if Terror of the Zygons has these issues, why is it so popular and why did it still seem like it was so ripe for a sequel?  Well, for a start the Zygons themselves are wonderful creations, and the interior and exterior of their ship is also superb. The idea of shape-shifting is a well-worn sci-fi concept but always has potential and can be very scary when it is done right. And boy does this story get it right, when Harry gets possessed. Ian Marter plays evil Harry with great skill, wielding a pitchfork like a pro, and it is shocking and frightening to see such a gentle, well-loved character go bad. This scene is one of the highlights of the story, and is well directed to maintain the tension.

The other major factor in this story’s success is the Doctor’s team of friends, as it feels cosy again like the Pertwee era, with Sarah, Harry and the Brigadier. Harry makes his last regular appearance here (with a little swan song in The Android Invasion), and the Brig bows out for good, apart from occasional reunions (and none for seven years). It is such a shame to see them go and the manner of their departure is pretty rotten.  The final scene is just astonishing, for all the wrong reasons. The Doctor offers Sarah, Harry and the Brigadier to come along with him. The Brig says ‘no thank you’, Harry politely declines and Sarah looks unsure but agrees. Don’t these people realise what they are being offered? It’s a police box that travels in time and space. They should be fighting their way in there. It is a crushingly disappointing moment for fans of Harry and the Brig and very difficult to rationalise. But looking at the story as a whole, Nicholas Courtney goes out on a high, regaining much of the dignity that the character lost towards the end of the Pertwee years. So we have a story that rises above its problems, thanks to a wonderful team of companions and a great monster. When Doctor Who gets those two things right, that’s half the battle won.   RP

Doctor Who was a very personal experience for me.  Unlike the water-cooler moments of today, there was no one to talk to in those early years of fandom.  I’d try to drag my baby sister in for whatever episodes I could but otherwise none of my friends watched it.  In fact, most of my schoolmates only knew of it because it came on before wrestling.  So it is very rare to recall watching any of it with another person.  There are only a handful of exceptions but one that comes to mind is Terror of the Zygons.  It was on a Saturday morning with my cousin Joe that we were flipping through channels and stumbled upon Doctor Who.  I saw all of about 2 minutes before he said it was stupid, changed the channel and settled on Baron Blood.  Sorry, Joe, Baron Blood was not even in the same league as Doctor Who.  (Who even remembers Baron Blood?!)   But those two minutes would engrain themselves with their whispering, sucker-covered aliens.  So much so that when I saw them again once I started watching the series regularly, I was overjoyed!

Terror of the Zygons was one of the golden era episodes, and it fits the era perfectly.  This one-off monster of the week would resonate with fans for years to come. This is the era of creepy music, eerie sets, dark atmosphere and terror around every corner.  This is the era that made me a fan.  And the Zygons were perfect for it.  Though humanoid in their bipedal appearance, they were the most bizarre creatures I’d ever had the pleasure to look at.  Giant domed heads, pronounced ribcages, deep-set eyes and whispering voices, capable of changing their appearance… it was Invasion of the Body Snatchers with scary looking monsters to boot.   Their ship was a living organism and looked every bit as alive as it was intended to.  And the Scottish moor, so reminiscent of The Hound of the Baskervilles, was a foreboding, isolated setting completely capable of instilling terror!

If the episode fails in any way, it’s the Skarasen – aka The Loch Ness Monster.  Sure it would give Sarah Jane an opportunity to impress Rose in School Reunion, but the creature is poorly superimposed and doesn’t really seem that impressive.  But, for all its size, it doesn’t have enough weight to hurt this episode. 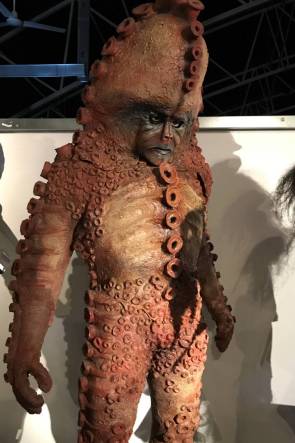 An original Zygon, pondering his future, photographed at The Doctor Who Experience

The story is perfectly creepy, reminiscent of the best of Hammer Horror films, with its castles, dukes and dark tunnels.  Plus giving The Doctor a chance to work with UNIT one more time makes up for a lot.  The Brigadier is one of the most wonderful characters of the classic series; seeing him in a kilt was as much fun for the viewer as it was for Sarah Jane!  Unfortunately, this would be his last appearance until 8 years later with Peter Davison’s story, Mawdryn Undead.  The landlord, Angus, adds a nice touch to the episode, playing his bagpipes and talking about his “gift of sight”.  Sister Lamont is an unnerving character; she adds perfectly to the oppressive fear.  The Duke of Forgill, when not the Zygon in disguise, is a very likable member of society.  His final word I still quote frequently while driving: “the sun was in my errrres….” (What?!  Was that supposed to be “eyes”?)   Harry, perhaps because he’s been shot, feels his usefulness as a member of the TARDIS crew has come to an end, which is a shame because this trio was the best trio in Who history!  Of course, I’m biased: they were the ones that first showed me the wonders of the TARDIS as a kid…   Sarah Jane gives us the best cliffhanger of the story when she is attacked while speaking on the phone.  That image of the Zygon reaching out with its mouth open is as memorable as it is horrifying!  And Tom as The Doctor…. Did I say “indomitable”?  The scene where he uses himself as part of an electrical circuit is marvelous.  I’m especially fond of his entire attitude when the Zygon commander, Broton, comes to check on him.  “Social call?”

If I were to recommend one story, this would be a strong contender.  It is only 4 episodes and they move with near-perfect pacing.  And it’s the only episode my cousin and I ever watched together, even if only for 2 minutes.

Read next in the Junkyard… Planet of Evil

1 Response to Terror of the Zygons