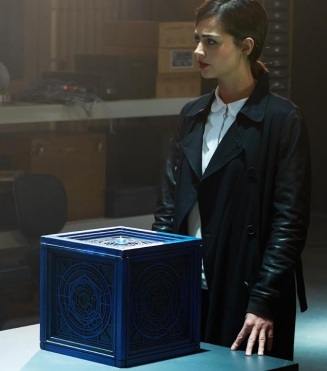 I think it is fair to say that Doctor Who rarely tackles the major contemporary issues facing society.  The Pertwee era went the furthest down that path, showing us allegories for the UK’s membership of the EEC and the miner’s strikes.  A McCoy story took a little dig at the Thatcher government, but you have to look very hard to find much more than that.  And what links all these little meanders down Allegory Street is they are all very domestic concerns.  So when Doctor Who looks at contemporary problems it tends to look at contemporary British problems.  This is something very different, because it is an allegory for global terrorism, and it is extremely thinly-veiled.

So we have the Doctor warning that attacking the radicals will radicalize the moderates, we see the use of human shields clearly paralleled with the Zygons taking over the bodies of soldiers’ relatives to make themselves very hard to kill, and we have the use of video clips to generate fear.  This is powerful stuff.  The second episode moves more towards being a lesson in the futility of warfare, showing us that ultimately war is the delaying tactic before eventually both sides have to start talking, and it is a delaying tactic that costs a lot of lives.  This is far from being about homegrown British worries, and is showing us proper scary global problems, and it feels a little bit uncomfortable and wrong.  Russell T Davies wouldn’t have gone within a mile of this kind of topic.  His stories that showed global warfare were the more simple escapism of straightforward alien invasions, and when his era made serious points they tended to be about past issues that still held fears, such as people getting sent off to concentration camps in Turn Left.  And I think the reason he and other showrunners (e.g. JNT for the most part) avoided the big scary fears of the day is that Doctor Who functions best as escapism.  It has always had an educational remit to some extent, but on a Saturday evening of family viewing we probably would rather be educated about Charles Dickens rather than terrorists taking hostages.

Having said that, what it sets out to do, it does brilliantly.  The Zygons have (in their limited appearances) always been far more than monster-of-the-week, because their loss of their own home planet was set out right from the start in Terror of the Zygons, and has not been forgotten.  Their motivation to resettle makes them a grey-area enemy, similar to the Silurians.  Osgood is back in a pretty outrageous bit of retrospective continuity when Steven Moffat obviously realised he had killed off a character that everybody loved and wanted to see more of, so that’s reversed.  Osgood started off as having a bit of fun with the Doctor Who fan stereotype, complete with cosplaying, but she has become a character with so much more potential than that, becoming the companion substitute while Clara is held hostage, and doing so magnificently.

As for Clara… and Bonnie, this is Jenna Coleman’s finest hour.  Clara’s home environment to represent her incarceration, with the outer world bleeding through, is great stuff, particularly when she starts to realise she can influence what is happening in the outside world.  And Bonnie is a brilliant character – far from a one-note villain.  All the big debate stuff with UNIT, Bonnie and the Doctor is simply stunning, as is the idea of the two boxes and the two choices within each one, although again we are uncomfortably close to real world concerns of somebody facing the choice of pressing a button to end a war.  Scary stuff, but dealt with ultimately in an upbeat manner.  I wouldn’t want Doctor Who to hit this close to home every week.  In fact, once in fifty years is probably sufficient, but maybe it’s OK for Doctor Who to wander down such dark alleyways, as long as it steps out into the sunshine at the other end.   RP

After almost 40 years, our favorite shape-shifters returned to Doctor Who in the 50th anniversary special, The Day of the Doctor.  Not content with making such a brief appearance, they  would come back again with Peter Capaldi in the two part adventure The Zygon Invasion/ The Zygon Inversion.   In talking about this story, it’s hard not to do a bit of explaining about the Capaldi era.

Peter Capaldi’s first season was a bouncy ride with our hero.  He’s stand-offish, somewhat uncaring.  As he says in Into the Dalek, Clara cares so he doesn’t have to.  But his first season ranges from “good” to “very good”.  By his second season, he has become more approachable, more like the hero we’ve always known and loved, but his stories suffered drastically putting “good” at the high point.  There are some standout moments however, and this two part story brings us one of the highlights of the season. It just takes a while to get there.

It’s not that the story doesn’t have all the elements to make it great.  The eeriness factor is high with the Invasion of Body Template Snatchers going on.  We get to see Osgood again which is always nice, though whether we are seeing the human or the Zygon version, we just don’t know.  Kate Lethbridge-Stewart is back too, and she’s fantastic.  I wish we’d have more relationship building with her as we did with her dad.  The thorn in this episode’s side really seems to come down to Clara.  Steven Moffat seems like he fell madly in love with his creation, and it’s not hard to see why when one looks at Jenna Coleman, but come on…  as lead writer, let’s not forget what we’re writing for!)  By making her more pivotal to everything than the Doctor himself, Moffat undermined his own show.  There are many examples throughout, but while we wait for those reviews, think about this:  the Doctor is so caught up on Clara that he would leave her 127 messages?  I don’t see it; it’s just not him!  Did Moffat forget who was the lead?  It frequently feels that way.  It comes down to her know-it-all attitude that was never in awe of any of the things The Doctor was showing her, that took away so much from the enjoyment factor.  With 127 messages on her phone, her first thought is to ask if he seriously called himself “Doctor Disco”.  Unlike her successor, Clara brings none of the wonder that the companion needs if they are to represent the audience.  What about the fact that she can overcome Bonnie through sheer force of will?  It’s hard to accept!  (Don’t blame poor viewing figures on the schedule… it was the writing and this season suffered brutally!)  Alright, to be fair, this story was not written by Moffat, but Peter Harness, but it bears the trademark of the Clara era – she’s superior, thinking herself the star of the show.  Also, this episode features a “replaced” Clara so some of her pomposity works well.  Evil-Clara comes across as powerful and scary, which is what we want from the enemy, and Coleman does a wonderful job relishing in it.

Then there’s the Doctor himself operating like he never learned anything about prejudice and how wrong it is.  Frankly, the Zygons receiving asylum on earth is a wonderful idea and I could see humanity deciding that they have to maintain human form, but for the Doctor to back that?  I don’t think he would.  Yes, it’s humanity’s planet, but the Doctor tries to make humans rise above themselves; I don’t think he’d go along with it.   Maybe we should also make them sit at the back of the bus?   (Hello, have we learned nothing??)  If that wasn’t enough, he calls them “squishy” and refuses to call Bonnie anything other than Zygella.  And the two children/zygons he calls “Monster High” and “Cinderella”  Why?   Isn’t one a form of belittlement and the other just being disrespectful?  This isn’t the hero we all love, and sure, that might have been part of his arc, but it doesn’t come across well.  If it really is an allegory about post-9/11 fears, the Doctor should not be taking part in the negativity!

But the episode holds one critical thing that is, as we say, a game changer: the Doctor’s final morality speech.  Good lord, it’s amazing!  His impassioned delivery carries such weight and emotion… and the message itself is brilliant; I’m talking Gettysburg Address level brilliance, just perhaps a tad shorter!  Everything about that sequence in the Black Archive is incredible.  This is the hero we know and love.  And Capaldi does that scene from the heart; he turns an episode that was average into something amazing, and it’s down to a few minutes of dialog at the end of the story.  Does it make me go back and love the episode?  Not completely, but it adds something to it that recovers it and makes it one of the 2 high points of the 9th season.

I hope the Zygons come back again; I think they are a brilliant race!   I love the Invasion of the Body Snatchers motif that hangs around them.  There are a lot of good stories that can come of them and they could all be prejudice allegories but the Doctor cannot be seen to partake in it.  Unless he starts calling Kate “punchy-girl” and Osgood “cosplay nerd”, he should not be calling Monster High, Cinderella and Zygella anything but the names they wants to be called.  Because he should always be above that!

In the meantime, we have to enjoy this episode for what it is and realize that not all of them can be perfect.  Let zygons be zygons, after all!  Am I right?

Read next in the Junkyard… Sleep No More

3 Responses to The Zygon Invasion